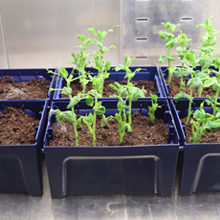 Micro-organisms have fascinating lifestyles and many of those that live in the natural environment carry out beneficial or detrimental functions depending on the situation in which they find themselves. Gram-negative Burkholderia represent one group of bacteria with exactly these ‘Dr Jekyll and Mr Hyde’ tendencies.

The major negative effect Burkholderia are known for is infection within a range of hosts including humans, animals and plants; in contrast, they also mediate highly beneficial interactions. A timeline of these positive and negative traits, together with key landmarks in our understanding of Burkholderia are shown (Fig. 1). Here we expand on how the dilemma of inherent Burkholderia pathogenicity initially led to a decline in the exploitation of these bacteria as beneficial biopesticides in the 1990s. However, renewed interest in these bacteria as a source of natural products and antibiotics, coupled with a greater understanding of their diversity and genomics, has provided an opportunity to repurpose Burkholderia as safe biopesticides (Fig. 1).

The ability to antagonise and kill a range of other micro-organisms was a key feature that drove the initial exploitation of Burkholderia bacteria as biopesticides. Although a number of antibiotics such as cepacin (Fig. 1) were historically known to be produced by Burkholderia, recent genomic analysis has shown that they encode multiple biosynthetic gene clusters for the production of various specialised metabolites. Burkholderia can produce polyketide antibiotics (e.g. enacyloxin and gladiolin; Fig. 1) that are made by large, modular biosynthetic gene clusters. They can also make both ribosomally synthesised and post-translationally modified peptides (e.g. capastruin) and non-ribosomally synthesised peptides and lipopeptide antibiotics (e.g. icosalides). The use of genome mining to identify novel biosynthetic gene clusters combined with sensitive analytical chemistry greatly enhances specialised metabolite discovery in Burkholderia bacteria.

Given their functional diversity, it is not surprising that Burkholderia also have very large genomes to encode these multiple capabilities. Their genomes are nearly twice the size of most bacteria, ranging from six to nine million base-pairs of DNA. Burkholderia also represent a minority of bacteria that package their genomes into multiple large replicons instead of having just one chromosomal piece of DNA. The majority of Burkholderia and Paraburkholderia species have two-replicon genome structures. The Burkholderia cepacia complex group of species (Fig. 2) have a three-replicon genome. In 2012 (Fig. 1), it was found that the Burkholderia cepacia complex third replicon was not an essential piece of DNA and could be genetically removed. Third replicon mutants lost a number of functions, including the production of antifungals and, most strikingly, their virulence in a range of infection models.

Multiple chemically synthesised pesticides are used to protect crops against a range of pathogens and during vulnerable stages of their growth. Germinating crop plants are highly prone to attack by pathogens, with damping-off disease (the failure of seeds to germinate or rapid wilting of recently emerged seedlings) caused by a range of fungi and fungal-like organisms called oomycetes. During the 1990s, several Burkholderia biological control products were registered with the US Environmental Protection Agency (EPA) and used successfully in a range of applications, including protection against damping-off disease.

Products, including Deny® and Blue Circle® manufactured by Stine Microbial Products, were described as containing [Burkholderia cepacia] strains M54 and J82. These strains and multiple other isolates with biocontrol properties were subsequently identified as the species Burkholderia ambifaria. In parallel with this beneficial use as biopesticides, [Burkholderia cepacia] bacteria were also emerging as devastating CF pathogens (Fig. 1). In 1999, after assessing the risks of Burkholderia biopesticides, a moratorium was placed on the registration of all new biopesticides until they could be proven safe (Fig. 1).

Future perspectives – what is needed to allow safe use of Burkholderia as biopesticides?

It is now clear that Burkholderia represent a novel source of antibiotics and encode a huge diversity of specialised metabolite biosynthetic gene clusters. To fully harness the potential of Burkholderia as natural biopesticides, we have to find out exactly how they work, for example as we have done by uniquely linking cepacin production to protection against Pythium damping-off disease. We also must find out what happens to biocontrol strains when they are applied to crops and left in the field environment. To be environmentally safe they need to decline naturally, and not build up or interfere with other microbial systems that maintain soil health.

Most importantly we need to make sure any Burkholderia biopesticides will be safe for use and will not cause infection. This can be done via an attenuation strategy; for example, removing the third replicon greatly reduced Burkholderia ambifaria pathogenicity, and now with modern strategies to develop safe bacterial vaccines, we can also consider removing other infection-mediating genes from biocontrol strains. Commercial confidence in the potential of Burkholderia biopesticides also appears to be re-emerging in the US, with Marrone Bio Innovations® marketing heat-killed Burkholderia products possessing nematocidal and mitocidal properties. Overall, producing enough food to feed the growing human population is a major global challenge, and this needs to be balanced against the environmental impacts of intensive agriculture. Burkholderia and other natural microbial biopesticides, which will not impact the environment, have huge potential to help sustain future agricultural production.

Alex J. Mullins was funded by a Biotechnology and Biological Sciences Research Council (BBSRC) South West doctoral training partnership (BB/M009122/1). Alex J. Mullins and Eshwar Mahenthiralingam acknowledge current funding of their biopesticide research by the BBSRC (award BB/S007652/1). We are also grateful to Professor Greg L. Challis and his research group (University of Warwick, Coventry, UK), for their continuing collaboration to understand the chemistry and biosynthesis of Burkholderia natural products.

Alex J. Mullins graduated from Cardiff in 2015 with a BSc in microbiology, having written his dissertation on Burkholderia bacteria in the Mahenthiralingam Lab. He decided to pursue this research further and started a PhD, investigating the genomic and antibiotic properties of the historical biopesticide Burkholderia ambifaria. Following his PhD, he continues to research Burkholderia as a postdoctoral researcher.

After completing a degree in Applied Biology at Cardiff and a PhD with the Medical Research Council, Eshwar Mahenthiralingam carried out 10 years of postdoctoral research on cystic fibrosis at the University of British Columbia, Canada. He joined Cardiff University in 1999. In addition to teaching microbiology and guiding his research group, he is also Co-Director of Research and works on the school’s management team.

Alex: I became interested in microbiology at school when we learnt about major historical diseases such as bubonic plaque and the role of microbes in vital nutrient cycles such as nitrogen fixation. I saw so much potential in these organisms that you could not see and, inspired by a biology teacher with a degree in microbiology, I followed up by studying and now researching microbiology at university.

Eshwar: When I was training as a microbiologist, the key skill areas I developed were in molecular biology and genomic analyses, and these, combined with bioinformatic knowledge, are now crucial for many areas of microbiology. Other key research skills include perseverance, curiosity, and the confidence to take risks and occasionally do ‘whacky’ experiments, many of which layed the foundations for successful programmes such as our current Burkholderia antibiotic discovery research.