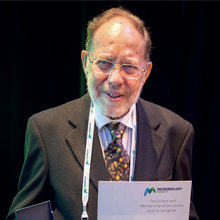 In a career spanning over 60 years, Michael Rossmann made seminal contributions to the field of protein structure. Although possibly best known to microbiologists for his structures of icosahedral viruses, he was also the first to define conserved nucleotide-binding motifs in proteins (the Rossmann fold) and developed the molecular replacement method used to solve around 75% of structures submitted annually to the Protein Data Bank (PDB).

Michael was born in Frankfurt, Germany, and educated in the UK from 1939. His undergraduate degrees were in Mathematics and Physics from the University of London and his doctorate, in chemical crystallography, was from the University of Glasgow in 1956. After two years as a postdoc at the University of Minnesota, Michael moved back to the UK to join Max Perutz, John Kendrew and Dorothy Hodgkin in the Medical Research Council’s ‘hut’ adjacent to the Cavendish Laboratory in Cambridge.

Michael worked with Perutz and Kendrew to solve the structure of haemoglobin, the first protein to have its structure reported. Following this, with David Blow, Michael developed novel phasing methods for solving protein structures. These methods, now known as molecular replacement, are fundamental to the solution of thousands of structures today.

While at Cambridge, Michael learnt that the mathematical puzzles of crystallography, although challenging in their own right, provided the key to understanding nature, in particular the relationship between the structure and function of proteins.

At Purdue University, Michael conducted comparative structural analysis of divergent dehydrogenases and identified a fundamentally conserved protein fold that bound nicotinamide adenine dinucleotide (NAD). This Rossmann fold is the most common motif present in the PDB. More significantly, Michael proposed that proteins were composed of domains, each with a specific function and conserved structure. This concept is a fundamental principle of protein structure, function and evolution.

The methods Michael developed to interpret the non-crystallographic symmetry of dehydrogenses were then applied to rod-shaped plant viruses and icosahedrally symmetric viruses such as rhinovirus (the ‘common cold’ virus). This structure, published in 1985, provided important insights into the biology of the virus. These included the canyon hypothesis, which described a conserved receptor-binding cleft, hidden from the host immune system, and the presence of a particle-stabilising sphingosine, displaced upon receptor binding. The principles of a metastable virus particle with an antibody-protected receptor-interacting domain are now well established in virology.

The principle of structure informing function was continued in studies of enveloped viruses such as dengue and Zika, the packaging motors of phages that form exquisite molecular machines and the giant Mimiviruses.

These achievements reflected the energy and enthusiasm Michael brought to solving the structures of life and were recognised in accolades from around the world. Michael was a member of the National Academy of Sciences (USA), a Foreign Member of the Royal Society (UK), a recipient of the Gregori Aminoff Prize (awarded by the Royal Swedish Academy of Sciences) and a presidential appointee to the National Science Board (USA).