Comment: Mixotrophic plankton – the perfect beasts of our oceans 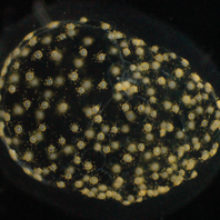 Oceans play a fundamental role in our lives, from being a source of food to a place to rest and relax when on holiday. Indeed, 40% of humans live within 100 km of the sea. Humans are fascinated with life in our oceans; dolphins, sharks, fish, the mysteries of the deep.

However, what is not well appreciated is that all these enigmatic marine megafauna, and indeed we (humans), are ultimately dependent on single-celled marine microbes drifting in the oceans (microplankton). When first formed, the Earth’s atmosphere was akin to that of Venus, comprising primarily carbon dioxide. Over millions of years, single-celled plankton have helped remove the carbon dioxide in the Earth’s atmosphere producing the oxygen that we and other animals consume. Even in today’s world, 50% of the oxygen we breathe in is produced by these microbes. Further, various products that we use in our daily lives, such as toothpaste, food colorants and cosmetics, include components from plankton.

What do we know about plankton?

Microplankton are either bacteria-like or are eukaryotes belonging to the kingdom Protista. For the last 100 years, protist plankton communities have been typically categorised into two groups: animal-like microzooplankton and plant-like phytoplankton. Microzooplankton are the ancestral forms, and the phytoplankton arising from these are the more recent forms. Over the last seven years we have shown that this plant–animal dichotomy is not applicable to the oceanic plankton communities. Most protists labelled as phytoplankton, and at least 50% of those labelled as microzooplankton, are actually mixotrophs. Mixotrophs mix different trophic strategies in the one cell; i.e. they can hunt like animals and photosynthesise like plants within their single cell.

Scientists have known about the mixotrophs for decades. However, the assumption was that these were ‘freaks’ or ‘curiosities’ of nature, inferior organisms in comparison with the pure forms. I came across the concept of mixotrophy in plankton during my PhD work on microzooplankton. I thought it was curious that these organisms which could engage in different strategies to gain nutrition were considered as freaks and not major players in marine ecology. The Leverhulme Trust funded our International Networking Grant application in 2011, and over the following three years we got together experts from Australia, Asia, Europe and America. We amassed data – phenomenological and numeric, field and laboratory – and collectively realised that the traditional paradigm where mixotrophs were considered to be freaks was wrong. We have now mapped the distribution of mixotrophs across global oceans from the poles to the equator and have found these to be ubiquitous in our seas and oceans during each and every season. We have shown that mixotrophs are actually the norm – they are the perfect beasts of our oceans. With this new mixotroph paradigm, we overturn over a century’s understanding of how life in our oceans work.

Once we had a new paradigm, the next question was could we put all mixotrophic protists into one group within a food web simulator? To find the answer, we started with a single-celled protist and followed a dichotomous key approach. The first question we asked was whether the protist could photosynthesise. If the answer was ‘no’, we got the purely heterotrophic microzooplankton. If they could photosynthesise, we then asked if the protist could eat as well; a ‘no’ gave us the traditional ‘pure’ phytoplankton. A ‘yes’ gave us the mixotrophs. If the mixotrophs have their own chloroplasts then we call them constitutive mixotrophs. Most of the Harmful Algal Bloom (HAB) species fall within this category. However, another group actually need to acquire phototrophic capabilities by ‘stealing’ chloroplasts from prey: these are non-constitutive mixotrophs (NCMs) and they operate rather like asset-strippers in business. Some NCMs are not fussy about who they acquire phototrophy from – these are the generalists. This group includes Strombidium and Laboea which are good fish-food. Other NCMs are specialists. Some specialist NCMs, like Mesodinium and the toxic Dinophysis, ‘steal’ body parts (plastids) while the biogeochemically important groups like the forams and radiolarians ‘enslave’ entire colonies of phototrophic prey. We have shown that depending on how the marine food web is configured within a simulator, the predictions of which community dominates the system changes drastically.

Why has it taken so long to appreciate the importance of mixotrophs?

Field and laboratory studies in marine systems have typically focused on either the phototrophic phytoplankton or the phagotrophic microzooplankton. When conducting experiments, scientists have not typically considered the possibility of mixotrophy in these protist plankton. If we do not look for something then we will not find it. By analogy, if you do not see a Venus flytrap capturing an insect, it would not be categorised as a carnivorous plant, the terrestrial mixotroph, that it is. Our text books are out of date. So are aspects of science underpinning environmental policies. And long-term monitoring, used for climate change, has been only looking at a fraction of the whole picture. So what next? We have recently been awarded a Marie Skłodowska-Curie Actions International Training Network grant. Within this grant we are developing new tools, experimental protocols and ecosystem simulators to study marine plankton ecology. We are also training the next generation of marine scientists in deployment of these tools to explore the new paradigm.

Aditee Mitra is a Systems Dynamics Modeller and a champion of marine mixoplankton, the perfect beasts of our oceans. She has experienced life outside of academia as a Media Fellow (BBC Countryfile), Biodiversity Officer, and Journal Managing Editor, Oxford University Press (OUP). Currently, she is a Senior Lecturer at Swansea University and a Visiting Professor at the Université Libre de Bruxelles. She leads the MSCA MixITiN project on mixotrophic plankton.

Image: The eSNCM Collodarian with symbionts sampled from the bay of Villefranche. Andreas Norlin and Joost Mansour; MixITiN ESR.