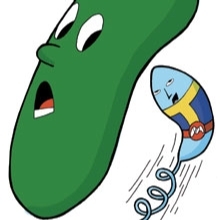 An ecosystem is a community of living organisms (plants, animals and micro-organisms), and the physical and chemical factors that make up its non-living or abiotic environment. Organisms within an ecosystem are connected and interact both with other organisms and their surroundings; these interactions are a vital part of how organisms develop overtime. A change in the size of one population affects all other organisms within the ecosystem and this is demonstrated most clearly by the predator–prey relationship where the predator (the hunter) feeds on its prey (the hunted).

When we think of predator–prey relationships it tends to be in terms of higher organisms, for example a lion stalking a herd of gazelles, foxes hunting rabbits and bears fishing for salmon. However, this type of relationship also occurs in the microscopic world where killers and their victims can be found on a much smaller scale. This article explores how microbial communities can be used as a model when the predator–prey relationship is being studied in schools. It is interesting to note that predation between prokaryotes is one of the most ancient forms of predation and it has been proposed that this process may have been the origin of eukaryotic cells.

Like a scene from a movie, these microbial supervillains use a range of mechanisms from nooses and sticky knobs to ‘vampire-like’ activity to catch and devour their prey.

Microbes that attack other microbes – Vampirococcus and Bdellovibrio

What makes these two bacterial predators unusual is that they both hunt down and prey on other bacteria!

VAMPIROCOCCUS SUCKS THE LIFEBLOOD OUT OF ITS VICTIMS

Vampirococcus is a small, ovoid-shaped bacterium that is found in the anoxic zones of lakes, in particular karst lakes, where hydrogen sulfide accumulates and dense populations of purple-sulfur bacteria develop. Vampirococcus appears to persist freely suspended in the water but only multiplies when feeding off its ‘victim’ – the purple-sulfur bacterium Chromatium. Most predatory bacteria feed off their prey from the inside; Vampirococcus is unusual as it remains on the outside of the cell it is attacking. It attaches to its prey via a specialised cytoplasmic bridge, a thin strand of cytoplasm that links the two cells. Vampirococcus is much smaller than its prey and a single Chromatium cell can be attacked by up to six vampirococci. The predator then releases enzymes into the Chromatium prey that break down the cytoplasm, allowing the nutrients to be ‘sucked up’ in a vampire-like fashion (hence its name). As the Vampirococcus feeds it grows and divides by binary fission until all it leaves is the empty shell of its prey, i.e. the cell wall, cytoplasmic membrane and some intracytoplasmic inclusions. 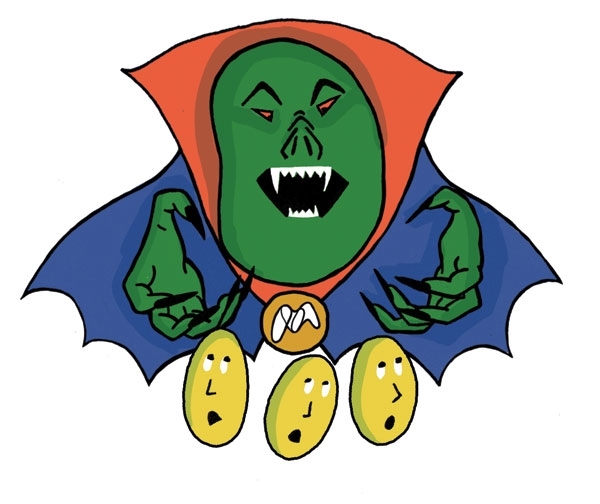 BDELLOVIBRIO – A FAST AND DEADLY INVADER

Bdellovibrio is found in a wide range of habitats, ranging from soil to water and even sewage, provided these environments are populated with other Gram-negative bacteria and oxygen. Bdellovibrio have a broad range of prey and feed off a wide variety of Gram-negative bacteria, for example Escherichia coli. However, they don’t attack other bdellovibrios, Gram-positive bacteria or eukaryotes. Once this microbe has sensed its prey, it swims rapidly towards it. Bdellovibrio moves incredibly quickly – it can cover 100 cell lengths every second – that’s the equivalent of a human travelling at about 400 miles per hour!

It latches onto the outside of its prey and, rotating like a corkscrew, it burrows itself inside through a small hole it creates in the prey’s outer membrane. Bdellovibrio then enters the host’s periplasmic space. Once inside the periplasm (the space between the cytoplasmic and outer membranes) it seals off the outer-membrane hole so there is little or no leakage of the cell’s contents. Bdellovibrio (below) can now start to feast on the contents of the unfortunate bacterium by excreting a variety of enzymes that breakdown the prey’s cytoplasm, which it uses for fuel and essential building blocks. As it feeds it grows and elongates into a sausage shape. When it can’t grow any more it divides into lots of smaller bdellovibrios, which burst out of the prey cell. These bdellovibrios then start to search for their own bacterial prey and the cycle continues. 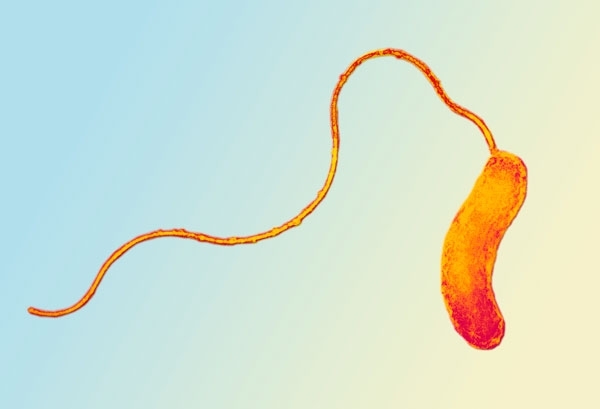 Over 200 species of fungi use specialised mycelial structures to capture free-living nematodes. Nematophagous fungi (nematode-destroying) occur in all sorts of soil environments. They produce hyphae traps that capture, penetrate, kill and digest a nematode’s contents.

The traps are usually formed in response to the presence of substances produced by the nematodes. Hyphal differentiation occurs spontaneously, usually very quickly, within a few hours, to produce functional structures (traps).

So how do these fungi lure the nematodes into their deadly trap? They take advantage of the fact that nematodes have no sense of sight and hunt down their food only using their sense of smell. The predatory fungus secretes chemicals that attract the nematode towards it (chemotaxis), the nematode thinks this is lunch and moves quickly towards the fungus and to a certain death.

Predatory fungi have different devices for trapping the nematode that have evolved separately. They are adhesive traps and constricting rings. 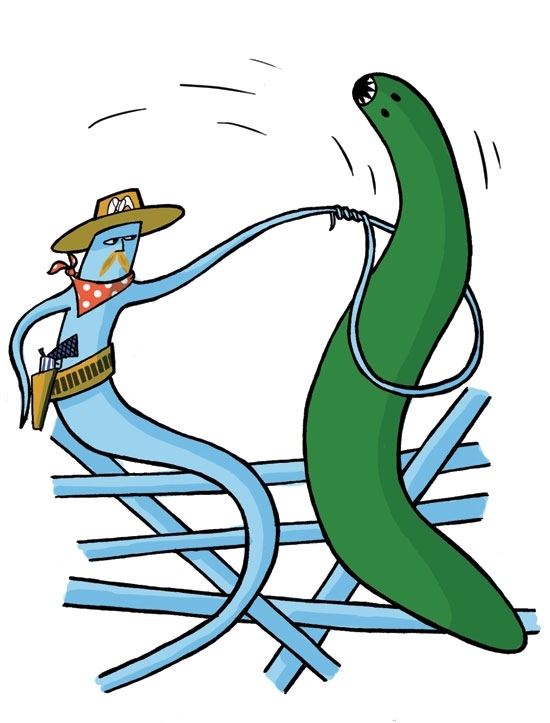 Adhesive traps capture their prey by means of an adhesive layer covering all or part of the trap. Although the traps are referred to as sticky, they are not sticky like adhesive tape because the devices don’t get clogged up with debris such as soil. Instead, the adhesive binds strongly to sugar compounds on the surface of the nematode. Different kinds of adhesive trap include:

Following adhesion, the nematode’s fate is sealed. Even if it struggles to break free by snapping the hyphae, the ‘fungal trapping organ’, will remain attached to the nematode and initiate infection.

This is the most sophisticated of the trapping devices – it is a ring-like structure which forms at the end of the hyphae. The nematode wriggles into the ring hoping to find food, but as soon as it touches the ring, it triggers a response. In less than 0.1 of a second, three curved cells that make up the closed loop swell rapidly inwards crushing the worm like a noose around the neck. Death follows very quickly. 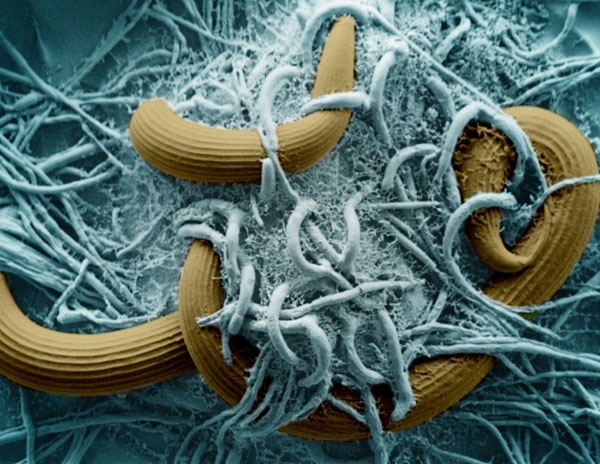 Once ensnared, the fungus pierces the nematode’s cuticle using a narrow penetration peg which swells inside the host to form an infection bulb that the hyphae grow from. Fungal enzymes break down the contents of the nematode and the nutrients are transported elsewhere within the hyphal system for growth or spore production. Growth does not occur at the site of the hyphal trap. This phase usually takes 1–3 days, before hyphae grow out of the cadaver and sporulate.

Researchers have an interest in studying these supervillains to see whether their ‘powers’ can be exploited for use in industry, healthcare or agriculture, for example the use of nematophagous fungi as biological controls or Bdellovibrio as an antibacterial agent. Professor Liz Sockett, Nottingham University, and her team have been carrying out research using Bdelliovibrio with ‘the long term goals of establishing Bdelliovibrio as a treatment for Gram-negative bacterial infections in humans, and in animals and plants’.

Guerrero, R. & others (1986). Predatory prokaryotes: predation and primary consumption evolved in bacteria. Proc Natl Acad Sci U S A 83, 2138–2142.
Jansson, H. B. & others (1985). Differential adhesion and infection of nematodes by the endoparasitic fungus Meriaconiospora. Appl Environ Microbiol 49, 552–555. microb.io/1cTTth9
Sockett, L. (2008). An inside job: Bdellovibrio bacteriovorus. Microbiol Today 35, 184–187.
Ying Yang & others (2007). Evolution of nematode-trapping cells of predatory fungi of the Orbiliaceae based on evidence from rRNA-encoding DNA and multiprotein sequences. Proc Natl Acad Sci U S A 104, 8379–8384. microb.io/J7Scrk