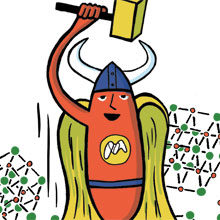 Halobacterium salinarum is an extremophile superhero on at least three counts. It can: (1) start to grow only when salt concentrations are three times higher than seawater  – and flourish when the main salt in seawater (sodium chloride, NaCl) starts to come out of solution; (2) withstand extremely high doses of radiation; and (3) survive for thousands and possibly millions of years entombed within crystals of salt. This article will highlight how these three properties of extreme halophily (salt-loving), radiation resistance and longevity are interconnected.

Halobacterium salinarum was originally grown in the laboratory from salted fish, but has been found in salt lakes, coastal salterns and ancient salt crystals. It belongs to the domain Archaea, and specifically to the family Halobacteriaceae (more commonly called haloarchaea). It is a single-celled organism and, like many of its relatives, forms red or pink colonies on agar plates, primarily because its cell membrane contains carotenoids (fatty compounds similar to those in carrots and tomatoes). The red colour of extremely salty environments, like the Great Salt Lake in Utah, is imparted by haloarchaea, and can be seen from space.

The red pond on the left is saturated with sodium chloride (NaCl), and has a crust of halite (NaCl) crystals on the surface. The mound of harvested halite is about 2.5m high. 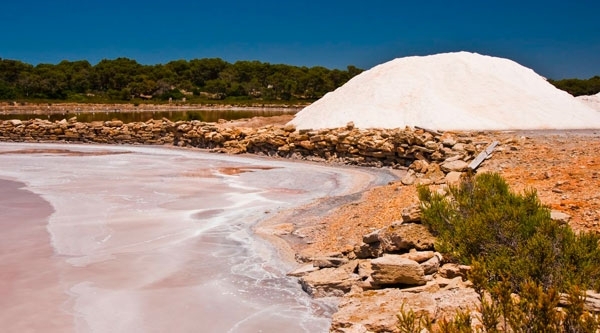 For H. salinarum to grow in hypersaline environments, it contains a highly concentrated salt solution (mainly consisting of potassium chloride, KCl), so the osmotic pressure inside and outside the cell is balanced; consequently, all of its proteins are adapted to work under these conditions. If it were placed in a freshwater lake or even in the ocean, water would flood into the cell, the cell membrane and proteins would lose their structure and the cells would burst open. This commitment to an extremely salty existence has its advantages; H. salinarum can grow with less interspecies competition than microbes living in more moderate conditions such as the ocean. This allows it to take advantage of the large quantity of organic matter that accrues as saline water evaporates, and the new organic matter made by photosynthesising halophiles. The main photosynthetic microbe that lives alongside H. salinarum is the green alga Dunaliella salina, which, instead of having a salt-filled cytoplasm, packs its cells with the small organic compound, glycerol, which maintains osmotic balance between the inside and outside of the cell. Glycerol leaking from the algal cells provides an excellent source of carbon and energy for H. salinarum. There is new evidence that H. salinarum provides nutrients to stimulate growth of the alga in return – a form of symbiosis. H. salinarum does face some competition, even in salt-saturated brines; its most enigmatic co-habitant is another haloarchaeon, Haloquadratum walsbyi. The ‘quadratum’ part of its name refers to its remarkable flat, square-shaped cells that divide like an old-fashioned sheet of postage stamps. 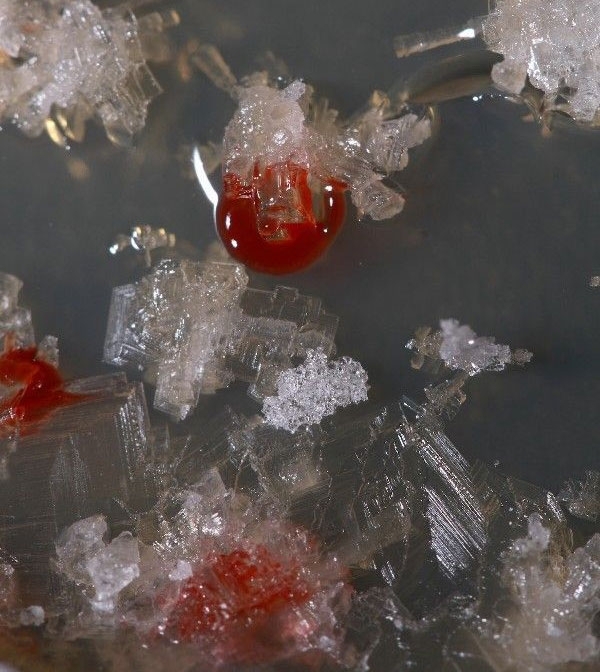 Adaptations to high levels of radiation

Hypersaline environments are prone to drying up, which, coupled with the high level of ultraviolet radiation that is typical of such environments, can result in cell damage. Both desiccation and radiation can damage cells by the production of highly reactive forms of oxygen, and so microbes that cope with drying are generally also good at surviving high doses of radiation. H. salinarum has evolved mechanisms that make it one of the most radiation-resistant microbes known. Evidence is emerging that the high cellular concentrations of peptides and the minerals phosphate and manganese (and correspondingly low levels of iron), combine to protect cellular proteins. These proteins include enzymes that repair damaged nucleic acids, which, combined with other unusual haloarchaeal features, such as multiple copies of the chromosome and an efficient means of repairing and recombining DNA fragments, ensures genetic material stays intact. The carotenoids and high cellular concentrations of KCl also provide radiation protection.

Although a crystal of common salt may look completely dry, up to 5% of its volume is liquid in the form of hundreds of brine inclusions, i.e. small reservoirs of salt-saturated brine surrounded by a solid matrix of NaCl. The pioneering work of Professor Bill Grant and others revealed that haloarchaea become trapped inside salt crystals, living in the brine inclusions. Hypersaline environments are dynamic systems that frequently dry up so this strategy employed by H. salinarum and friends enables them to survive within a small-scale aquatic environment until the rains come and dissolve the salt crystals, regenerating the brine lake.

Based on their morphologies we can identify D. salina living alongside Haloquadratum walsbyi (flat square with gas vesicles). A rod-shaped microbe can be seen, which may be Halobacterium salinarium 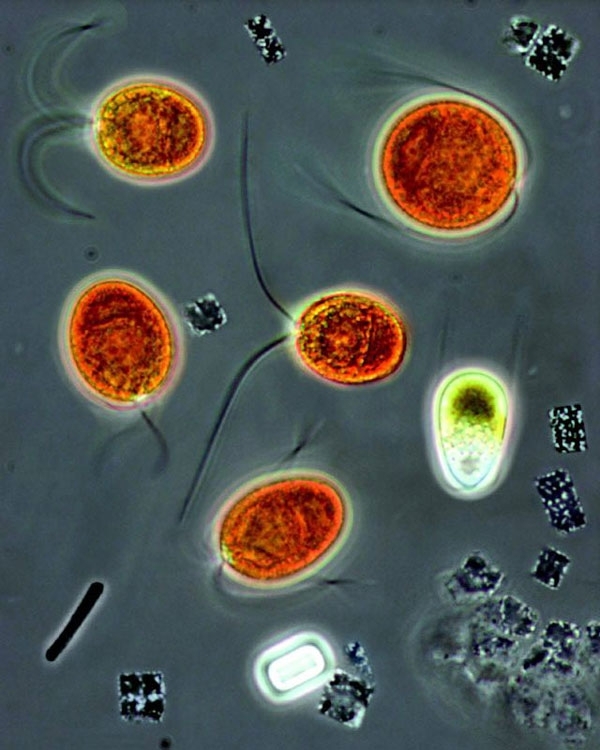 But what happens to the haloarchaea if the rains don’t come and the salt starts to accumulate and ultimately gets buried? From laboratory experiments we know that haloarchaea, and H. salinarum in particular, can remain alive inside salt crystals for years. We cannot perform experiments for thousands of years, instead, we sample directly from ancient buried salt deposits, taking great care to exclude external contaminants. Different research groups have independently and repeatedly isolated haloarchaea from ancient salt crystals, and evidence for ‘super’ survival over millions of years is growing, while evidence for survival over tens of thousands of years is almost unequivocal.

Over time, salt crystals may be buried, forming the salt deposits we mine today, and providing an environment conducive to long-term survival of entombed microbes by restricting the amount of radiation reaching the cells. In addition, the salt-saturated brine inclusions contain little oxygen, minimising the creation of cell-damaging reactive oxygen compounds. Incidentally, H. salinarum can grow with or without oxygen.

SCHEMATIC ILLUSTRATION OF WHERE AND HOW HALOARCHAEA SURVIVE IN SALT CRYSTALS

From left to right. A laboratory-made crystal of NaCl encasing a haloarchaeal species. The orange colour is from the haloarchaea. The cloudiness of the halite (NaCl) crystal is due to the large number of brine inclusions shown in the second schematic. The third schematic illustrates a single, large brine inclusion, showing the scenario in which H. salinarum is entombed with the green alga D. salina (top left). e shows a single cell of H. salinarum. Those environmental or cellular features that enable the cells to survive over geological time are described in the boxes. Sizes are for illustrative purposes only and pictures are not always drawn to scale. T. McGenity

What can H. salinarum feed on inside brine inclusions?

There are many open questions about the amount of energy needed, the nature of the environment and the cellular adaptations required to hold the Grim Reaper at bay for millions of years. It will be important to learn how different species of halophile interact, and how those interactions change over time in the closed system of a brine inclusion. Astrobiologists should be aware of H. salinarum’s long-term survival, as Mars once had an environment that was more conducive to life, including hypersaline brines that turned into salt deposits. Also, Jupiter’s moon Europa has subterranean hypersaline seas. Therefore, if we are going to search for existing or former life on other planets, these salty environments should be prime targets.