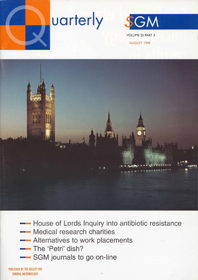 The lead articles of the August 1998 issue of SGM Quarterly are on the House of Lords inquiry into antibiotic resistance; medical research charities; alternatives to work placements; the 'Petri' dish; and SGM journals to go online.

Medical research charities in the UK – a long history and a growing role (p. 92)

Many medical research charities have their roots in past centuries, yet their contribution to current research funding is enormous, as discussed by Diana Garnham.

Resistance to antibiotics and other antimicrobial agents (p. 94)

The increasing resistance of pathogens to antibiotics and other antimicrobials is a matter of great importance. Ulrich Desselberger describes the SGM submission to the recent House of Lords Inquiry.

Sandwich placements are hard to come by these days. Jo Verran suggests some successful alternative activities for students.

As its name suggests, the Petri dish is generally thought to have been invented by an assistance of Robert Koch, called Petri. Here, Milton Wainwright shows that an Englishman, Percy Frankland, has a better claim to the invention.

Janet Hurst reports back from the annual Edinburgh International Science Festival. This was the Society's fifth year of participation.

Alex Pesnyakevich reports on the International Development Fund being used to further science in post-Soviet states.

The emergence of new antibiotic-resistant bacterial strains and new viruses makes it clear that infectious agents have retained their ability to cause severe problems for the human population and B.K. Rima believes it will continue to do so in the foreseeable future.