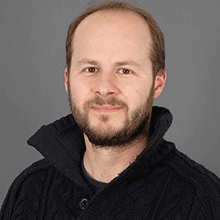 I am a Professor of Microbiology at the University of York, where I have been now for nearly 20 years. My research interests are quite broad, but are largely on the physiology of how bacteria acquire nutrients from the environment with a focus on transport proteins in their cell membrane. More recently we have been trying to apply this information to different aspects of biotechnology, including the production of sustainable chemicals and a project looking at how bacteria cause body odour in humans.

I can point to a single event, which was reading the book 'Microbes and Man' by a microbiologist called John Postgate, who it turns out was also Editor in Chief of Microbiology at one stage in his career and then later our President. He was able to communicate the diverse ways that microbes impact our daily life as well as how amazing they are as chemists, shaping the whole planet. The speed at which a bacterial population can grow using only simple chemicals is still something I find amazing and is probably why physiology and biochemistry became early areas of my research in my PhD work. I didn't read that many books as a child and mainly spent my teenage years bumming around the North Yorkshire Moors on my mountain bike, so I really have a lot to thank Postgate for in seeding my whole career in studying the work of the invisible.

I joined in 1995 after starting my PhD at the University of Birmingham. My supervisor, Professor Jeff Cole, was a prominent member of the Society of General Microbiology (the SGM) as the Microbiology Society was then known and joining was a rite of passage for all his students, and of course in those days one needed to be nominated and seconded, which meant actually knowing other members. I attended my first meeting in the same year, with a travel grant from the Society, and made the long train journey up to Aberdeen, being the only person from the lab attending, to hear a load of world-leading microbiologists’ talk. This was a joint meeting with the American Society of Microbiology (ASM) and I distinctly remember hearing Holger Jannasch from Wood Hole Oceanographic Institute, who did a keynote about microbes from deep-sea hydrothermal vents, which was something I'd read loads about as an undergraduate so this was pretty awesome.

What motivated you to get involved with Microbiology?

Early in my academic position at York, I had taken on the role as Editor of Microbiology Today, which was very enjoyable and meant that I sat on Council, in a rather crowded room at Marlborough House, the Society’s headquarters at the time, which were near Reading. As well as mixing with my senior colleagues, I could see how important the journals were, and still are, to the income of the Society, supporting all the things that benefit our members, like my first Travel Grant to Aberdeen in 1995 and subsequently as a lecturer, being able to apply for Harry Smith Vacation Studentships. Once my own research was established at York, I was invited to become an Editor for Microbiology, which I of course accepted as my way to start putting back into the Society.

Since becoming Editor-in-Chief, in what ways has the journal changed to better serve the microbiology community?

The first change we instigated was creating some clear topic areas within the journal, most of which now are overseen by a Senior Editor. We also appointed four new Senior Editors (Tracy Palmer FRS, Steve Diggle, Martin Welch and Mike Brockhurst) to lead these new sections and a host of new Editors to support both these new areas and existing ones. Our new topic areas also align with some of the UN’s Sustainable Development Goals and so fit in with other activities of the Society. What has been fantastic is that Tracy has now joined me as Deputy Editor-in-Chief and is helping drive forward lots of new ideas while still looking after her panel. To help authors and Editors get papers turned around quicker we have revamped our Board of Reviewers and have just created a Rapid-Review Track to attract high-quality papers that have been through peer review at other journals and wish to use those reviewers to get a quick assessment for their suitability for Microbiology.

Next year is the 75th anniversary of Microbiology. What are some of the highlights you’ve found in the journal’s history?

I have recently been looking through some of the very first issues of Microbiology, which was then the Journal of General Microbiology, and it has been fascinating to see how many areas of research that started in that period are still being studied to this day, albeit with vastly improved methods and understanding of microbial function. Also, the diversity of people doing microbiology research, despite the limited number of places it was done, is quite striking. We hope to tell some of these stories in a series of articles in 2022, with the main foci on microbiology research at this time and the people and places in which the science was done. There are some great stories we hope you will enjoy reading about next year.

Microbiology has been releasing themed collections in the lead up to the anniversary year. What can we expect to see in 2022?

The collections have been running in 2020 and 2021, and we hope they are going to help get more high-quality submissions to the journal, through the hard work of some of our new Editors. One of our collections for 2022 is the Microbial Cell Surface collection and will form a series of excellent Review articles linked to a symposium at Annual Conference in 2022 – the first of our Microbiology-linked symposia at our flagship event. There will also be collections on environmental sensing in bacteria and microbial evolution. Each collection has an early career microbiologist (ECM) involved, so talk to the ECM Forum if you are interested in getting involved in a future collection in your area (via [email protected]y.org).

Why are Society journals important and how can members get more involved?

A large part of the income that runs the Microbiology Society comes from the publishing arm, and so keeping them healthy and strong is really critical to keep the Society strong. The ‘Publishing for the Community’ message seems to slowly be getting out as young scientists want to support their learned societies rather than the shareholders of the large for-profit publishers, which is where your article processing charges go when you publish there. Over the next few years, there are going to be big changes to how the Society continues to generate income from publishing, but the best thing you can do is to publish in and promote our journals, especially, of course, Microbiology.

The future for microbiology is incredibly exciting, as we gain deeper and broader understanding of the function of microbes in their natural environment and their applications for mankind. For me, the role of communities of microbes is probably the biggest area we are going to start making inroads into in the next few decades, from gut to skin microbiomes, to anaerobic digestors to global chemical recycling in oceans, plant roots and soils. Not much in biology happens in isolation and understanding this complexity is our next big challenge. When writing in ‘Microbes and Man’, John Postgate discusses the human gut microbiome and it was known to be important for health but was really poorly understood – a ‘black box’. Advances in genomics and tools to visualise microbes in situ, to name but two, have given us enormous insight that would have seemed impossible when I was at school, and microbiology will continue to advance at a tremendous rate. Being Editor-in-Chief of Microbiology and writing the monthly Microbial Musings gives me the privilege of dedicating time to reading about some of these advances outside of my own field within the broad topic areas that we cover.

Microbiology, the founding and flagship journal from the Microbiology Society, showcases the diversity and importance of microbiology by publishing fundamental and applied research across the breadth of the field. Find the latest journal articles on our website.