Comment: Can microbes solve the time of death questions? 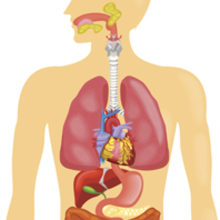 Is death the end of life? In some ways, it is; but in terms of the microbial activity on, in and around cadavers, there is an abundance of microbial life in human fatalities that may potentially aid death scene investigations.

One of the major goals of criminal death investigations is to determine the post-mortem interval (PMI) of the deceased person. A dead body is teeming with micro-organisms. These microscopic decomposers proliferate as they mediate decay, and they can be comprehensively studied using both cadavers’ and the grave-soil environments. Scientists including a team at Alabama State University are undertaking the daunting task of producing the largest cohort of relevant micro-organisms found in organs such as the liver, skin, and in cadaver grave-soil during decomposition: the thanatomicrobiome, or ‘microbes of death’.

Microbiome of death studies seek to catalogue all micro-organisms involved in human decomposition. Studies have included the identification and characterisation of micro-organisms extracted from over 400 specimens obtained from 100 cadavers acquired from homicides, suicides, over-doses and accidental death investigations. Soil samples are collected beneath body zones of cadavers at varied stages of decomposition at the Forensic Anthropology Research Facility (FARF) ‘body farm’, a 26-acre outdoor human decomposition research laboratory located in Texas State University’s Freeman Ranch. This is spatially the largest facility of its kind on the globe. It receives body donations for scientific research studies according to the Universal Anatomical Gift Act. Since 2008, research has been conducted on more than 150 donated bodies, with another 200 living people pre-registered for donation upon their demise.

The cadaver soil studies catalogue the microbial diversity in soil collected under strategic locations from cadavers’ remains on soil. Decomposition of human remains placed on soil is biologically mediated by three main decomposers – endogenous and soil microbes (e.g. bacteria and fungi), insects (such as flies and beetles) and scavengers (e.g. moles and vultures). As with the thanatomicrobiome study, the aims of our study is to determine if there is a correlation between microbial populations in the cadaver decomposition soil and the time of death and/or the time of placement of the human body on the soil. Traditional forensic decomposition investigations of human remains have focused primarily on the macroscopic, observable post-mortem evidence such as decomposition stages, animal scavengers or insect developmental stages. But these techniques depend heavily on the subjective opinions of the investigator. Further, these types of investigations often do not correlate with fixed time points. But there is a growing awareness that the micro-organisms on human remains and in the soil beneath them could potentially provide molecular clues in criminal investigations.

In the microbial forensics studies molecular techniques are used, due to the fact that a vast majority of micro-organisms proliferating in the human body and in soil cannot be cultured. Studies have been undertaken to design and optimise cadaver tissue and soil sampling methods, DNA extraction techniques, DNA amplification via polymerase chain reaction (PCR) and next-generation metagenomic sequencing platforms to characterise the fluxes of the microbial communities during decomposition. The beauty of next-generation metagenomic sequencing is that it can assess the DNA sequences of an entire microbial community in a single run of less than 10 hours. Bacterial species identification and changes in richness are determined to provide information that aid in the development of forensic tools based on the variations in the microbial populations.

Human corpses are not as easily accessible for research as are animal models. Studies of this kind have been conducted using replicate mice and pig models, but not using decomposing human tissue. Studies performed by a research team at Sam Houston State University and Baylor College of Medicine catalogued the bacteria existing internally at the onset and end of the bloat stage of cadavers placed at Southeast Texas Applied Forensic Science Facility. Their results show that the bacterial communities were different between the corpses and between regions on the same corpse, and these bacteria changed over time during the course of decomposition. 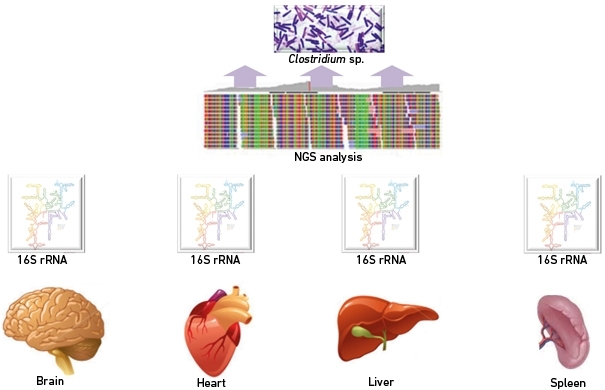 Grave-soil studies of microbial diversity are more common, but are yet hampered by the sheer number of microbial cells and diversity of distinct taxa per gram of soil. Studies have estimated that the number of species of bacteria per gram of soil varies between 2,000 and 8.3 million cells, depending on the soil type. Jessica Metcalf of Colorado University-Boulder’s BioFrontiers Institute and a team of scientists used the mouse model system to study the body cavities and associated grave soil of 40 decaying mice over a 48-day period, and a ‘microbial clock’ was demonstrated. Their PMI estimates correlate to actual PMIs within approximately three days.

The future direction of these studies will assuredly determine if there is a correlation between the microbial abundances of specific communities of bacteria and the time of death of the human body. These studies are daunting and non-trivial tasks. But through state-of-the-art, metagenomic efforts led by myself and my team and others around the world, the clues provided by microbes of death will be discovered.

Dr Gulnaz Javan and her team of microbial forensic scientists, Ismail Can and Sheree Finley at Alabama State University are endeavouring to use molecular innovation to pin-point the precise time of death in criminal cases, funded by a $200,000 National Science Foundation grant.

Can, I. & others (2014). Distinctive thanatomicrobiome signatures found in the blood and internal organs of human. J Microbiol Methods 106, 1–7.

Metcalf, J. L & others (2013). A microbial clock provides an accurate estimate of the postmortem interval in a mouse model system. eLife 2, e01104.