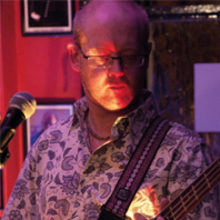 Where are you currently based?

I am based at the Centre for Biomolecular Sciences, in the School of Life Sciences at the University of Nottingham.

What is your area of specialism?

I have worked for many years on a cell-to-cell signalling system in Pseudomonas aeruginosa known as quorum sensing. When I started my PhD, and during my postdoctoral work, I focused on understanding the mechanism of how quorum sensing works. Over the last 10 years I have focused on social evolution in bacteria and asked more adaptive questions about quorum sensing: why do these behaviours evolve and why and how are they maintained in natural populations? Understanding whether or not a behaviour is social can help us understand how bacterial populations interact within infected hosts, explaining some kinds of clinical observations as well as how virulence and antibiotic resistance evolves.

Tell us about your education to date

I went to a comprehensive school in Stockport, which I left at age 17 without doing any A-levels. I began working in a small company that isolated a compound from rabbit brains that was used to test the clotting time of blood, and my job was to remove 200 brains from rabbit heads that we got every day from the local abattoir. After 18 months, I moved to work at Withington Hospital before moving to the Paterson Institute for Cancer Research in Manchester. I knew I needed to get a degree to move on, so before attending Salford University full-time in 1993, I did a one-day a week access course in science for two years. I graduated from Salford University in 1997 at age 27 and earned my PhD from the University of Nottingham in 2001, and then did postdoctoral research until 2006. I was awarded a Royal Society University Research Fellowship in 2006 which finished in 2014, and I was appointed to Associate Professor in 2013.

Where did your interest in microbiology come from?

When I was 10 years old, my junior school teacher Mrs Liversage told us about the Great Plague of London in 1665. From that moment, I have always been fascinated by microbes and disease.

What are the professional challenges that present themselves and how do you try to overcome them?

Balancing research, teaching, admin and family life. I imagine most people would say the same, and I don’t particularly know how I manage this, or if I am doing a good job managing it!

What is the best part about ‘doing science’?

There are so many good things. Discovering things that only you in the world at that moment know about is pretty cool. Publishing papers is great although the reviewing process can be very tiresome at times. Certainly science should not be about having to reformat your paper for another journal due to a rejection! I think the best thing is that you get to meet and work with people from many different countries and backgrounds. Science brings all sorts of people together and I think this is a really positive thing. It’s also great when you can have some influence on the careers of the next generation of microbiologists.

Who is your role model?

Role models can come from anywhere, and I have met many along the way that I would call role models. I won’t embarass them all by naming them, but I will give one special mention. My junior school teacher Mrs Liversage was a big influence. Not only did she teach me about the plague, she taught me the first chords I learnt on the guitar. Now I look back, she was a very important influence on both my career and my favourite hobby.

What do you do to relax?

I play bass guitar and write and record music with my band Mr Meaner. I helped form this band when I was 19. The name was supposed to be an amusing play on the word misdemeanor. It was funny for about 10 minutes and then it became annoying, but we stuck with it. After calling it a day in 1995, we recently reformed the band to record what we should have done 20 years ago. We are just known as Meaner now. I also like to read. I’m a bit of a Tolkien nerd, and I like the Game of Thrones novels and TV series.

What one record and luxury item would you take to a desert island?

This is very difficult as I like so many records! An album I always go back to is Abbey Road by the Beatles. They had just finished recording Let It Be, which was an unhappy album where there appeared to be a lot of fighting between them all. I think they felt they couldn’t leave it like that so they decided to record Abbey Road. You can tell this was an album recorded by a group of people who did actually really like each other so I think it’s a very positive album and a very fitting end to the Beatles’ career. Luxury item? Probably an iPad if there was electricity to charge it.

Tell us one thing that your work colleagues won’t know about you!

I used to have very long hair, wear an Iron Maiden T-shirt, and play Dungeons and Dragons. Actually they would all probably guess that!

If you weren’t a scientist, what would you be?

The easy answer to that is that I’d like to be a rock star, but obviously that is not going to happen! I don’t know why but I always quite fancied being a postman, so that’s what I’d be interested in doing.

If you would like to be featured in this section or know someone who may, contact Paul Easton, Acting Head of Membership Services, at [email protected]