The ecology of soil-borne human diseases 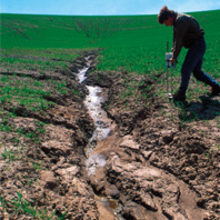 The International Year of Soils, as declared by the 68th United Nations General Assembly, aims to raise awareness of soils and the numerous vital ecosystem services that they provide, including the provision of food, fuel and fibre, storage and filtration of water, climatic regulation and waste decomposition. All of these services are the result of the myriad of interactions of organisms in the soil, including bacteria, archaea, protozoa, fungi and soil fauna. The functioning of these organisms is so vital that there would likely be no above-ground life on Earth, and certainly no human life, without life in soil. It is with this in mind that the following article on soil-borne human diseases should be read.

Soil is vital to human existence and the vast majority of organisms that reside in it function to our benefit. However, soil also harbours a minority of organisms – some of which call soil their home, while others pass through it transiently – that are capable of causing diseases in humans: these are soil-borne human pathogens and parasites. These organisms represent a relatively understudied group; indeed, the World Health Organization does not yet recognise soil-borne human diseases as a distinct group (with the exception of soil-transmitted helminths), as they do with food-borne diseases or zoonoses, for example. However, these diseases cause considerable mortality and morbidity worldwide. It may be possible to reduce incidents of such diseases through increased understanding of their ecology, their role and survival in soil, and the land management practices that can exacerbate or reduce infection rates.

There is currently no internationally recognised, comprehensive list classifying which human diseases are soil-borne. Part of the difficulty in compiling such a list is that many pathogens can be transmitted through the soil if they come into contact with an infectious host in a suitably short time frame. For example, measles can theoretically cause infection from surfaces, including the soil surface, as opposed to direct transmission through the air. However, as there is a 30–70% reduction in viable virus particles in the first minute that they are outside of a host, infection by such a route is unlikely – over such a short time frame the infectious host is likely to still be present in the vicinity and infection from them is a more probable route. To include all such diseases under the umbrella term of ‘soil-borne human diseases’ seems likely to be unhelpful at best. Therefore, in a report to the European Commission in 2011 we proposed a definition of soil-borne human diseases to be ‘...human diseases resulting from any pathogen or parasite, transmission of which can occur from the soil, even in the absence of other infectious individuals’. In the same report we identified 39 diseases that occur globally and which fit these criteria (see Further reading).

From an ecological perspective it is apparent that the identified pathogenic organisms can be classified into two groups. Some of the organisms are true soil organisms in that they are capable of completing their lifecycles in the soil (or potentially with an aquatic or semi-aquatic phase) without the need to infect a human (or any other) host. Hence, we named them edaphic (from the Greek for ‘true soil’) pathogenic organisms (EPOs). This group includes most of the bacterial and all of the fungal pathogens. These are opportunistic pathogens that generally only infect susceptible individuals, such as those who are immuno-compromised, or those who have repeated or large exposures to such organisms.

The second group consists of obligate pathogens that are capable of surviving within the soil for extended periods of time before infecting humans who come into contact with contaminated soil. However, they cannot complete their entire life cycle in soil; they are not true soil organisms. These can be referred to as soil transmitted pathogens/parasites (STPs). 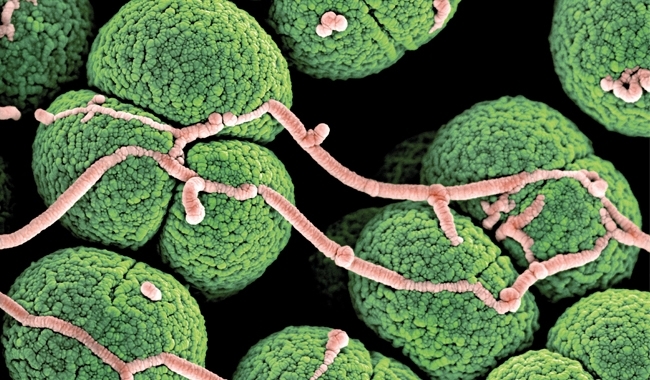 As is often the case with the natural world, strict categorisation has its limitations. Instead a continuum is likely to exist with some overlap of organisms between the two groupings (for example, strongyloidiasis and shigellosis). Nevertheless, such a distinction is helpful as it highlights areas for further research and aids epidemiological data interpretation; for example, it is probable that infection by EPOs came from the soil but with STPs this is much less certain. This consideration is important for investigating whether a particular land management practice enhances or mitigates soil-borne infection rates.

This distinction between soil-borne human diseases based on life history has further utility as it is likely that EPOs provide ecosystem services such as breaking down organic matter, potentially remediating pollutants, or affecting soil sensitivity to erosion while within the soil. As such, reducing the abundance of these organisms in the soil may have negative effects such as enhanced soil degradation. The trade-offs between promoting human health and preventing soil degradation will need identifying and quantifying on a locational basis. Conversely, it is likely that STPs will interact less with the provision of ecosystem services as such organisms are likely to be in dormant forms or only have limited activities while in the soil. Therefore, there remains a need to identify how land or agricultural practices may reduce the abundance of STPs within the soil, or the length of time that such organisms remain viable. Such work may allow soil management practices that suppress STPs to be developed such that their implementation may have positive impacts on human health, preferably with minimal effects in terms of soil degradation.

The viability and maintenance of virulence of pathogens outside of their hosts depends on several environmental factors such as temperature, moisture, UV light and pH. It might be possible to control some of these factors through land management practices. For example, the surface layers of cultivated soil tend to dry faster those of non-cultivated soils, which may cause soil particles and soil-borne pathogens to be blown around. Currently, the importance of each factor on pathogen survival in soil is not yet well understood although temperature is generally thought to be the most important factor for modelling microbial decay rates for microbes that are unable to replicate in the environment (i.e. STPs). Furthermore, interactions between such factors are complex. For example, increased soil moisture may both cause and be influenced by increased survival and activity of micro-organisms within the soil. Reduced soil moisture has been shown to increase the transmission of some pathogens from soil by increasing the amount of dust available on which the pathogens may disperse. Vegetation, such as cover crops, is likely to lead to reduced infection rates due to reduced wind erosion, but canopy cover will also reduce the amount of UV reaching the soil surface thereby potentially increasing survival rates of pathogens at the soil surface.

COLOURED SCANNING ELECTRON MICROGRAPH OF BACILLUS SP. SOIL BACTERIA. THESE GRAM-POSITIVE BACTERIA ARE SAPROTROPHS, ORGANISMS THAT FEED AND GROW ON DEAD AND DECAYING ORGANIC MATERIAL. THEY ARE PART OF A DIVERSE ECOLOGY OF SOIL MICRO-ORGANISMS THAT PLAY A VITAL ROLE IN DECOMPOSING AND RECYCLING ORGANIC MATTER. 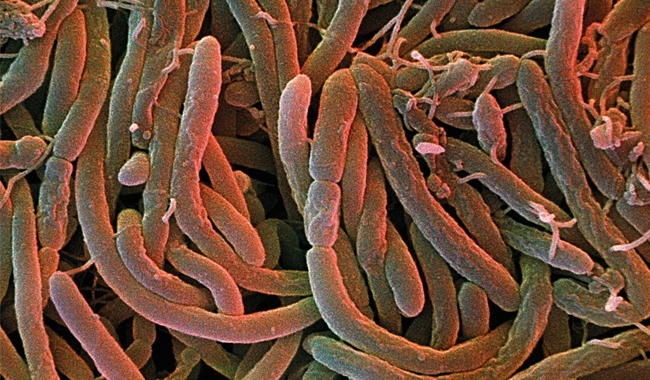 Soil degradation through processes such as erosion, loss of soil structure, desertification, excessive soil tillage, and soil mining activities are likely to impact on human health in several ways. Such degradation results in reduced crop productivity but is also likely to increase infection from soils as infectious organisms become air-borne on eroded soils, or pathogens survive longer in soils which have reduced biodiversity. As such, there is a clear link between ‘healthy’ soils and healthy humans and it is important that this link is recognised so that we can maximise the benefits and minimise the risks as we utilise the fundamental, life-giving and non-renewable resource that is the soil.

Department of Terrestrial Ecology of the Netherlands Institute of Ecology, and Laboratory of Nematology of Wageningen University. PO Box 50, 6700 AB Wageningen, The Netherlands
[email protected]