The smell of the soil 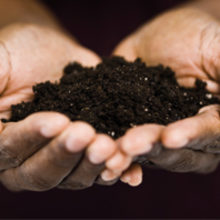 ‘You speak like the very spirit of earth, imbued with a scent of freshly turned soil’
The Hall of Fantasy by Nathaniel Hawthorne

‘And scent of earth, sweet with the evening rain…’
All Round the Year by Edith and Saretta Nesbit

Just what is the scent that inspires such celebratory descriptions? The chemical responsible has been given the name ‘geosmin’. In the last few decades we have learnt not only its molecular structure, but also its microbial and biochemical origins. It has turned out that geosmin must have perfumed the soil that first began to cover the land half a billion years ago, thanks to the activity of the earliest Streptomyces bacteria.

Animals as diverse as flies and humans are incredibly sensitive to geosmin, so its perception probably evolved very early in the emergence of primitive animals.

The evocative smell of freshly disturbed or wetted soil was first studied scientifically towards the end of the 19th century, when French biochemists Berthelot and André succeeded in extracting ‘l’odeur propre de la terre’; but it was not until 1965 that the Americans Gerber and Lechevalier tracked down the main odour component to a single compound, which they called geosmin [from the Greek, geo (earth) and osme (odour)]. Gerber finally published the structure of geosmin in 1968. It is a member of the extensive family of terpenoid oils that are natural odours, flavours and signalling molecules (more than 70,000 naturally occurring terpenoids have been discovered). The sensitivity of diverse animals to geosmin is astonishing: it is reported that humans – not famous for their olfactory virtuosity – can smell it at levels as low as 100 parts per trillion.

The ability to make geosmin is an ancient bacterial trait

By the time that geosmin was chemically characterised it was well established that its major source in soil was bacteria of the genus Streptomyces. These abundant and complex bacteria grow like fungal moulds as a mycelium of branching thread-like hyphae, playing a very important part in the recycling of vegetable matter. Echoing fungal moulds, they reproduce by sending up aerial hyphal branches that bear spores. Geosmin is associated with Streptomyces spores, which are present in huge numbers in many soils. We can safely assume that the time-traveller visiting the planet as it was about 440,000,000 years ago would recognise the familiar smell of soil, as the earliest land plants collaborated with the first streptomycetes to generate protocompost.

COLONIES OF STREPTOMYCES AMBOFACIENS. THE FUZZY SURFACE OF THESE GEOSMIN-PRODUCING COLONIES IS MADE UP OF MILLIONS OF SPORES SO HYDROPHOBIC THAT WATER DROPLETS FORM ON THE COLONIES AS PERFECT SPHERES. STREPTOMYCETES ARE FAMOUS FOR THEIR ABILITY TO MAKE ANTIBIOTICS, S. AMBOFACIENS BEING USED IN THE PRODUCTION OF SPIRAMYCIN. 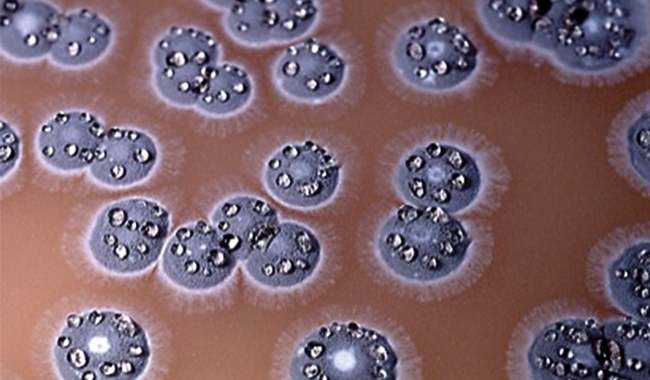 Some other bacteria that are very unlike streptomycetes produce geosmin too. They include some myxobacteria, which roam the soil in swarms consuming other bacteria, before building elaborate multicellular fruiting bodies big enough to be visible to the naked eye. Geosmin is also produced by many cyanobacteria: photosynthetic bacteria well known as the agents of toxic blue-green scums, inaccurately called ‘algal blooms’, on recreational waters. Clearly, the production of geosmin and other earthy odours preceded the origin of streptomycetes, since the last common ancestor of these diverse geosmin-producing bacteria probably existed more than two billion years ago. Geosmin is also made by some soil-dwelling eukaryotic organisms, including some fungal moulds (notably Penicillium species), and beetroots, which owe their characteristic earthy taste to geosmin.

The first sesquiterpene synthase to be studied was that involved in making pentalenolactone, an unusual antibiotic made by a few streptomycetes. Studies led by David Cane at Brown University, USA, established many of the key features of the enzyme’s action. When UK and Japanese scientists determined the first genome sequences of streptomycetes, several genes related to the pentalenene synthase gene were found. In the hope of finding the determinant(s) of geosmin production, mutations were introduced into these genes in the model organism Streptomyces coelicolor, and indeed one of the mutants could no longer make geosmin. The relevant gene encodes a geosmin synthase with two distinct pentalenene synthase-like domains, one of which converts farnesyl diphosphate into the sesquiterpene germacradienol. The other domain then converts germacradienol into geosmin. The genes responsible for geosmin synthesis in myxobacteria and cyanobacteria are homologous with the Streptomyces genes, consistent with the idea that they have a common origin in an ancient progenitor of these diverse bacteria that lived nearly three billion years ago.

S. coelicolor additionally produces a monoterpene, methylisoborneol, that also contributes to earthy odours. Two adjacent genes determine methylisoborneol synthesis, in which geranyl diphosphate is first methylated, and then cyclised. A third odorous sesquiterpenoid, albaflavenone, which has antibiotic activity, results from the activity of another gene pair in S. coelicolor. One of the genes encodes a terpene cyclase that acts on farnesyl diphosphate to make the tricyclic epi-isozizaene, and the other encodes a cytochrome P450 that oxidises epi-isozizaene to generate albaflavenone. This gene pair, like the methylisoborneol genes, occurs in about half of streptomycetes (most often, streptomycetes have one or the other pathway). It is curious that genes for Streptomyces antibiotics are usually of much rarer occurrence than the albaflavenone genes, suggesting that albaflavenone may benefit the producing organisms in a different way from most antibiotics, but perhaps similar to that of methylisoborneol.

The dramatic increase in understanding of terpenoid synthases has been exploited in the case of epi-isozizaene synthase, the hydrophobic active site contour of which has been remoulded to change the profile of products, giving rise to hopes that the knowledge-based manipulation of such enzymes may be exploited in the production of biofuels. 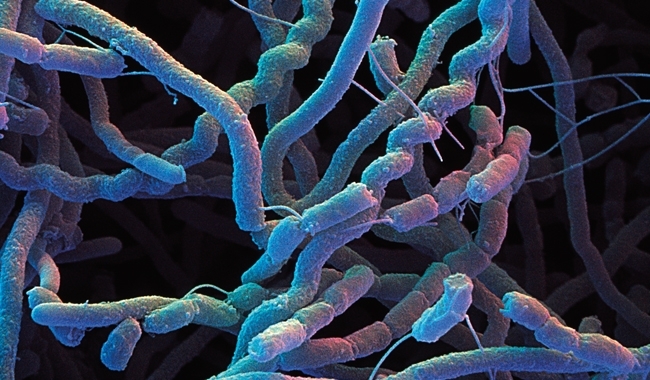 How ancient and pervasive is the ability of animals to sense geosmin?

Sensing of geosmin has recently been studied in detail in the fruit fly Drosophila melanogaster. The ability of fruit flies to detect geosmin is exquisite, and they hate the smell – so much so that it overrides the attraction of the flies to all known food sources. This extreme chemorepulsion is mediated by a dedicated neural connection to the brain from specific geosmin sensors, and allows flies to avoid food sources contaminated by micro-organisms toxic to them and their larvae. Since humans are also so good at detecting geosmin, it seems very likely that this ability (and hence the possession of geosmin receptors) is very widespread among all animals, perhaps sometimes serving to attract and sometimes to repel. In his 2007 book Streptomyces in Nature and Medicine, past Microbiology Society President, Sir David Hopwood, entertainingly rehearsed speculations about the detection of geosmin by animals, ranging from primitive worms and arthropods that use the producing micro-organisms as a food source, to camels looking for water in the desert. The animals would then convey the geosmin-producing organisms to new locations, either after passage through the vector’s gut, aided by the ability of the tough spores to withstand digestion, or carried externally. In Sir David’s words, “this is such a nice idea; let’s hope it turns out to be true”. A 1978 American study showed that a Streptomyces that causes potato scab was present on, and in, soil arthropods associated with the infected potatoes. Whether notions of geosmin attracting animals are true or not, they have not depended on modern scientific advances: in 1903 the American writer Mary Austin wrote, in The Land of Little Rain, “the coyote is your true water-witch, one who snuffs and paws, snuffs and paws again at the smallest spot of moisture-scented earth until he has freed the blind water”. As outlined previously, geosmin was evidently being produced two to three billion years ago, before the emergence of eukaryotes (ca. two billion years ago), let alone of multicellular animals (ca. 600,000 years ago). It is therefore quite plausible that geosmin sensing by animals may have had a single evolutionary origin in an ancient universal common ancestor. 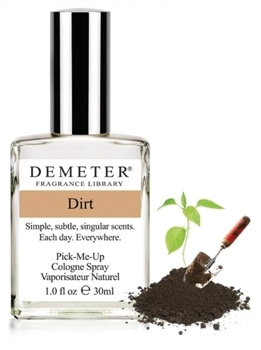 Perfumiers have found geosmin an irresistible component of some of their concoctions, either as a purified commercially available product (as a 1% solution) or, as in the case of a more traditional potion, Mitti Attar, by distilling sun-baked earth with sandalwood (it is said to resemble the smell of the first monsoon rain on parched soil). For example, in the perfume The Smell of Weather Turning by the cosmetics company Lush, “geosmin is supported by oak wood, hay, beeswax, nettle, English peppermint, mint and Roman chamomile”. On the other hand, geosmin also has a considerable nuisance value, sometimes being the cause of off-tastes in water, wine and freshwater fish – there is a considerable library of research papers devoted to these aspects. It may also contribute to the smells generated during the large-scale industrial culture of streptomycetes for the production of antibiotics. Annoyance to nearby communities might perhaps be mitigated by the use of molecular genetic techniques to disrupt the geosmin synthase gene.

Li, R. & others (2014). Reprogramming the chemodiversity of terpenoid cyclisation by remolding the active site contour of epi-isozizaene synthase. Biochemistry 53, 1155–1168.