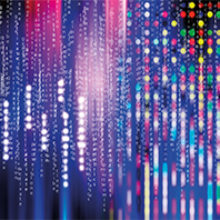 Microbiomics, the study of microbial communities in the context of their environmental characteristics, is effectively microbial ecology and the suffix ‘ome’ nicely combines the concept of ‘biomes’ with modern developments in ‘omics’ approaches.

The explosion in use of the term ‘microbiome’ and the less explosive, but still dramatic, increase in community studies result largely from development of molecular techniques to characterise microbial communities. Until the early 1990s, we typically studied natural communities by incubating solid growth medium, inoculated with environmental samples, and then isolating pure cultures, which were identified by measuring many physiological characteristics. These physiological data allowed us to explore relationships between isolated organisms and environmental characteristics, providing a basis for development, and experimental testing, of ideas, explanations and ecological concepts.

Molecular techniques provided a major advance by liberating us from reliance on laboratory cultivation. 16S rRNA genes, amplified from extracted DNA, enabled identification by comparison of sequences with those in burgeoning databases, assessment of diversity and comparison of communities. Findings were remarkable. We discovered considerable diversity, even in familiar cultivated microbial groups, and abundant microbes in high-level taxonomic groups with no cultivated representatives. This approach was extended to functional genes and was greatly facilitated by decreasing sequencing costs. It is worth remembering that no technique is perfect and molecular community analysis has bias and limitations. Some cells lyse more easily than others, some genes are easier to amplify, etc., but this tremendous technical advance generated many surveys and sequence lists. This is now the standard approach to community analysis but in some senses it represented a backward step. Ironically, this is partly because genome sequencing of cultivated microbes demonstrated considerable lateral transfer of genes, particularly those of ecological importance. We therefore have only limited information on relationships between (16S rRNA-based) phylogeny and function, which is the basis of evolutionary and ecological theory, and the valuable link between environmental and physiological characteristics was broken.

Microbial ecologists attempted technical solutions to this problem. Sequencing of transcripts and proteomics, respectively, indicate which genes are stimulated and translated following environmental change. Increases in gene abundance tell us which organisms are growing. Stable isotope probing indicates which organisms assimilate a particular substrate. Sequencing all genes (metagenomics) indicates potential function, but relies on the (dangerous) assumption that gene presence is linked to activity and ecosystem function. It is easy to be seduced by these techniques but they are only as good as their ability to answer scientific questions and test hypotheses.

This introduces what I believe to be a major limitation to advances in microbiomics. Many of the promises made for microbiomics and ‘omics’ techniques are reminiscent of those made for early molecular techniques 25 years ago. Our limited ability to deliver on these promises results from an apparent reluctance to ask important, critical scientific questions or to propose ideas, hypotheses and explanations for unexplained natural phenomena. Most studies are not question- or hypothesis-driven, and microbiomics is dominated by descriptive and correlation-based studies. Correlation-based studies attempt to gain information on links between phylogeny and function by looking for correlations between 16S rRNA gene sequences and environmental characteristics. It is relatively easy to obtain such data but the environmental characteristics measured are usually those that are cheap and easy to measure, rather than those of ecological relevance. These studies also assume, implicitly, a relationship between phylogeny, physiology and environmental characteristics. As a consequence, they are usually descriptive and situation-specific and are rarely based on important scientific questions. They can be used to generate hypotheses and explanations, but these are rarely tested.

Hypothesis-based studies also lead to discoveries. Our first molecular studies of soil ammonia oxidisers tested the hypothesis that soil pH selects different groups of these organisms. Sequence data answered this question but we could not avoid discovering extremely high sequence diversity or groups with no cultivated representatives. These discoveries were unexpected and raised new ecological questions, but this study exemplifies the point that discoveries do not require unstructured surveys. It can even be argued that important discoveries are more likely to arise from question- and hypothesis-driven research.

The field of microbiomics is enormously exciting and provides intellectually interesting and stimulating scientific challenges that are important within and beyond microbial ecology. We have never before had such powerful techniques to study microbial communities, but we must think carefully if they are to be fully exploited. We will only make significant advances in scientific understanding of the links between communities and their environments if we begin by identifying interesting phenomena and questions, and suggest explanations and potential answers that can be tested experimentally, thinking carefully about which techniques are required. Important scientific questions are unlikely to be answered by hoping that explanations will ‘fall out of the data’ and microbiomics will advance faster, and deliver its promise, only when we can match technical ingenuity with intellectual effort, creativity and the confidence to develop and test original ideas and concepts.