Microbial communities within the chronic wound 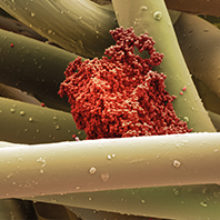 Wound infection currently costs the NHS more than £4 billion per annum, with over 100,000 chronic wounds diagnosed each year. It is understood that all types of wounds are readily colonised by micro-organisms of either endogenous or exogenous origin.

Acute wounds, such as surgical site incisions, cuts, abrasions or traumatic skin damage, often become infected but resolve quickly, usually without the aid of antimicrobial intervention. Conversely, chronic wounds are characterised by their failure to heal in a timely, predictable manner, and instead remain stuck in a non-healing state for many months or even years. When the microbial load of a chronic wound exceeds 1x106 colony forming units per gram of tissue, it is regarded as being clinically infected.

Traditional cultivation-dependent methods of microbial isolation and identification have largely biased the recovery of certain bacterial and fungal species from chronic wounds, namely those that thrive in isolation under laboratory conditions such as Staphylococcus aureus and Pseudomonas aeruginosa. Next-generation molecular techniques and metabolic analysis of chronic wound microbial populations have begun to reveal the true complexity of the chronic wound microbiome, with an estimated 300–400 different species identified from a variety of chronic wounds to date. Despite this advance in identification, inconsistent findings between wounds at different anatomical sites, of different sizes and depth, highlight the need to establish a better understanding of the chronic wound microbiome.

The skin is primarily colonised by bacteria of four major genera: Acinetobacteria, Bacteroidetes, Firmicutes and Proteobacteria. These comprise a mixture of aerobic and anaerobic bacteria whose predominance is determined by location. For example, anaerobes are more prevalent in the groin, under the arms and between the toes. In addition to this, there are several endogenous fungi including genera such as Candida, Malasezzia, Debaromyces and Penicillium to name a few. Members of these bacterial and fungal genera typically also constitute the chronic wound microbiota, most likely because of their proximity to the original site of epithelial damage. Commonly encountered, chronic wound bacteria include Staphylococcus aureus, Pseudomonas aeruginosa, Enterococcus faecalis, coagulase negative staphylococci, Proteus spp., Streptococcus spp., Citrobacter spp., Morganella spp., Propionibacterium spp. and Corynebacterium spp. Common fungi include Candida albicans, Candida parapsilosis, Malasezzia restricta and Curvularia lunata. 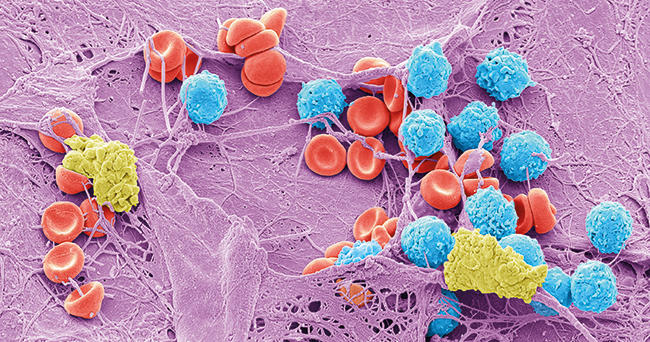 The co-occurence of micro-organisms is characterised by the presence of biofilm, which is associated with 60% of chronic, infected wounds. Significantly, polymicrobial biofilm within the wound bed has been shown to impair healing by disrupting the finely tuned, sequential events necessary for wound closure to occur. This is concurrent with a dampening of the pro-inflammatory immune response which is critical for innate immune clearance, and consequently maintains low-grade production of cytokines which perpetuates the tissue damage that favours colonisation. Currently, the specific types of micro-organism that mediate impaired healing remain to be defined, but a combination of multiple bacterial species and the nature of the biofilm lifestyle appears to be critical.

A definitive shift from colonisation to infection in the chronic wound has long been thought of as solely the consequence of microbial load. However, it has become progressively apparent that other elements are at play, including species diversity and pathogenicity. As wound chronicity progresses, an eventual diminution of microbial species occurs until a small number of dominant, pathogenic micro-organisms remain and this reduction in microbial diversity has been correlated with a worsening prognosis. Furthermore, community symbiosis, because of specific or non-specific microbial interaction, is linked to increased pathogenicity and documented for many chronic infectious diseases such as lung infection in sufferers of cystic fibrosis or chronic obstructive pulmonary disorder, or periodontal disease in the oral cavity.

Diagram showing the distribution of micro-organisms over the skin of the human body. 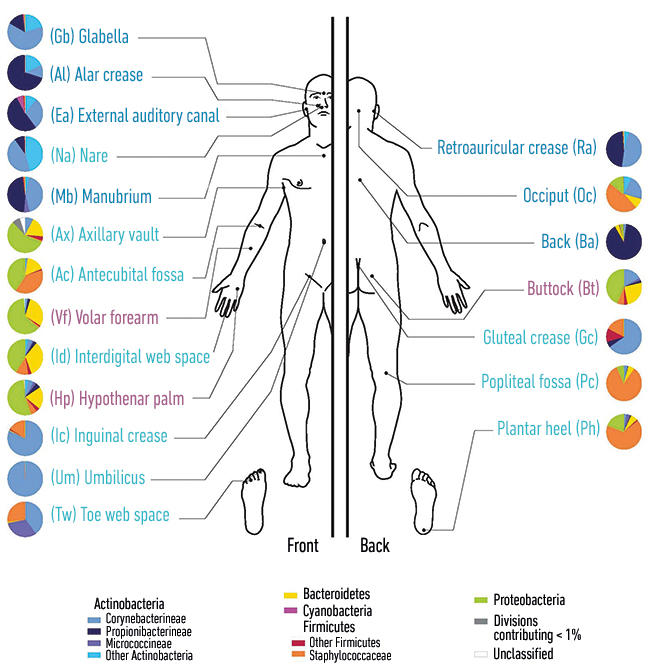 Little is known about the temporal and spatial development of the chronic wound microbiome. A combination of cooperation and competition for space and nutrients invariably drives niche partitioning, where those best adapted to the local environmental conditions will thrive at the expense of those less well adapted. For example, bacteria with a lower oxygen requirement are likely to predominate in the deeper tissues. Population analysis using both phenotypic and molecular methodology has so far indicated a high degree of species segregation amongst the chronic wound microbial populace, with commonly co-isolated pathogens such as S. aureus and P. aeruginosa found at distinct regions within wound biopsies, indicating that despite sharing the same environment, they are unlikely to interact in vivo. Despite the current scarcity of evidence thoroughly describing interactions between members of the chronic wound microbiota, evidence has highlighted specific interactions between S. aureus and the opportunistic fungi Candida albicans. For example, S. aureus has been observed attached to the hyphae of C. albicans and this interaction is thought to promote invasion of an ordinarily non-motile bacterium into the deeper skin tissues.

Regardless of the large body of evidence describing the composition of the microbial community of chronic infected wounds, a robust mechanistic understanding of community development and microbial interaction remains to be established. Attempts have been made to utilise knowledge of the oral microbiota and plaque development as a means of informing models of chronic wound colonisation and progression to clinical infection. Currently, these have culminated in the concept of genetically distinct, co-occurring bacteria behaving as functional equivalent pathogroups resulting in so-called pathogenic biofilms — much like members of the oral microbiota. Drawing on knowledge of oral microbial communities, it is not unreasonable to suggest that chronic wound colonisation occurs in a similar manner, with initial colonisation by skin microbiota followed by secondary colonisation by pathogens. By applying many of the techniques traditionally employed in the study of oral biofilms, such as temporal analysis of microbial interactions, it might in future be possible to establish a sequential model for the development of chronic wound biofilm.

The complexity of the chronic wound microbiota has given rise to the proposition that chronic wound infection cannot be reduced to a single bacterial species. This notion challenges Koch’s postulates and, with regards to the diagnosis and management of chronic infected wounds, confers several problems. Not least because diagnosis of infection has traditionally relied upon the isolation of specific micro-organisms subsequently targeted for treatment selected by analysis of pure culture. Therefore, a comprehensive theoretical model of the chronic wound microbiome, taking into consideration temporal development, spatial distribution and synergistic bacterial interactions, has the potential to provide an invaluable clinical tool to inform appropriate, timely intervention to manage chronic wound infection.

Misic, A. M. & others (2014). The wound microbiome: modern approached to examining the role of microorganisms in impaired chronic wound healing. Adv Wound Care 3, 502–510.