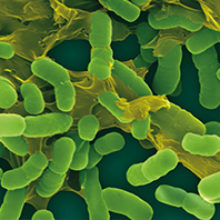 Any gardener will tell you that the key to a productive and healthy crop is a ‘good’ soil. It is well understood that the sand, silt and clay content of a soil determines its nutrient cycling and water retaining properties. This reflects centuries of development in agricultural practices. Crop rotation, especially with legumes and their nitrogen-fixing bacterial symbionts, became a cornerstone of the agricultural revolution in Europe from the 18th century onwards and created significant increases in crop yields throughout the 19th century. The ‘nitrogen hypothesis’ proposes that this directly enabled the growth of the European population and, hence, the Industrial Revolution.

In the early 20th century, development of the Haber–Bosch process (for which Fritz Haber and Carl Bosch were awarded the 1918 Nobel Prize for chemistry) made synthetic fertilisers widely available for the first time. Combined with the Green Revolution during the second half of the century, millions of people were brought out of food poverty.

Agricultural production has, so far, been able to feed the world’s expanding population, but this may not last. Soils are being lost – to erosion, drought, flooding, salination and urbanisation – faster than they can be replaced by geological weathering. The steady increase in crop yields based on plant breeding technology is slowing down and cannot keep pace with population growth. Now, attention is turning to the soils: understanding their structure and function will give us ways of managing agricultural land that will maintain crop yields in the increasingly smaller spaces we have for farming.

The aim, then, is to create agricultural soils that are “good” and “healthy” in the way gardeners understand. But what is a “healthy” soil? There has been much debate recently about this among farmers, researchers and government. What we all agree on is that the soil microbiome – the living component of the soil including bacteria, fungi, protists and other single-celled organisms – is key. It plays many roles in soils, but as yet we understand rather little about them.

We do know that organic matter in soils, derived from microbes, is essential. Microbes capture and bind together organic matter and mineral soil particles to create the structure on which soil fertility so strongly depends. Most importantly, it appears that a soil with a diverse microbial community will have more large soil particles, called macroaggregates. Macroaggregates are water-stable particles larger than 250µm in diameter, which improve how water and nutrients are maintained within the soil.

Soils dug from a ley strip (left) and conventional arable field (right). Note the difference in texture of the soils. Inset: the number of earthworms extracted from each of the soil samples. 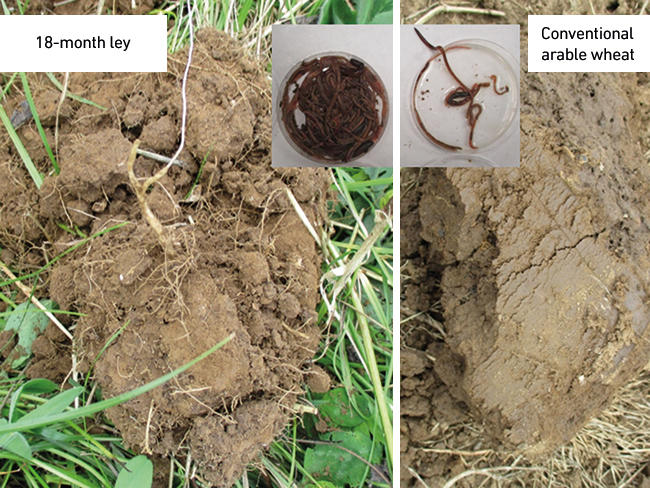 A very sandy soil is rather like a bowl full of peas: all the particles are the same size and shape, and they pack together neatly resulting in a very low water holding capacity. By contrast, a sandy soil with a substantial proportion of larger organic macroaggregates, or a bowl of peas and grapes, is unevenly packed, with more airspaces of varying sizes, allowing more water to fit in the bowl.

Like the bowl of peas and grapes, soils with thriving microbial communities and plenty of macroaggregates, i.e. soils that have better structure, hold more water. This benefits both crops and the surrounding environment: if rainfall is taken up into the soil, then there will be less surface runoff and thus less flooding in other areas. And fertilisers spread on crops are available to the crops for longer, increasing efficiency, and reducing downstream pollution.

Evidence suggests that microbes are essential for the development and maintenance of macroaggregates. Particles of sand and clay are bound by bacteria, and fungal hyphae further tie these together into particles of increasing size. Soil microfauna, protists and earthworms are attracted to these rich sources of nutrients, increasing the biological activity around them. These microscopic biological factories effectively bind nutrients within soils where plant roots can access them – without them, the nutrients simply wash away. Unfortunately, typical agricultural soils have fewer macroaggregates, and this may be limiting crop yield.

In 2011, researchers from the Universities of Leeds, Sheffield and York came together to develop the University of Leeds farm as a platform where large scale experiments to understand the soil microbiome could be integrated into a working mixed arable farm. One of the management strategies being investigated is the use of grass/clover leys (or fallow) to recover soil structure and function.

Planting a mixture of grass and clover has been a traditional ley/fallow rotation all over Europe since the 19th century, but cheap synthetic fertilisers have encouraged farmers to leave less land fallow. We are investigating how quickly leys improve soil structure and fertility, and early data suggests it can happen surprisingly quickly. Soil from a ley strip has a visibly ‘crumbly’ texture after 18 months that is absent from the ploughed strip alongside and, even without the statistical analysis, we can tell the number of earthworms has increased.

We are currently looking for the microbes that build the structure. We expect to find bacteria that secrete sticky polysaccharides, and other molecules that attract particles together. Of particular interest are the arbuscular mycorrhizal (AM) fungi – beneficial symbionts that colonise plant roots. They grow extensive hyphal networks into the soil that again bind large particles together and from which the hyphae capture mineral nutrients that are moved to the host plant in exchange for carbon.

Agricultural practices such as ploughing and extended periods of bare ground in fields, reduce the diversity and quantity of AM fungi. We know that productivity tends to increase when AM fungi are present, most likely because they act as a link between the plant and the rest of the soil microbiome, enabling the plant to access nutrients and water in a way it cannot do without them. We can demonstrate these effects in simple experiments, but the challenge now is to show this at the farm scale, to understand the mechanism that drives this, and to find out what the other microbial groups, such as nitrogen fixers and fungal pathogens, are doing. New DNA sequencing technologies that enable fast, cheap and data-rich genome sequencing have transformed microbiology, and the study of soil microbiomes is no exception. These technologies allow us to identify these microbes, and observe any change in diversity and function as the ley develops so that we can understand who is doing what, where and why. 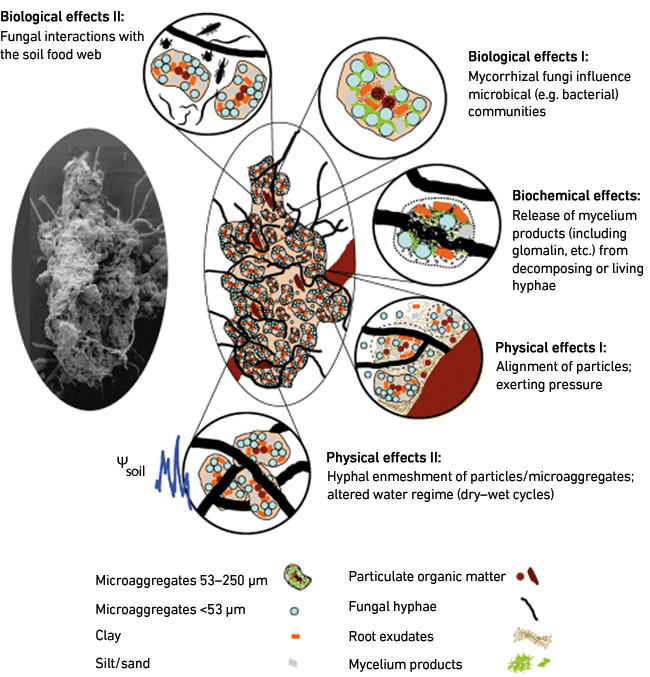 The 21st century and beyond

We urgently need to find ways to improve soil structure. Climate change models predict that extreme weather events will become more frequent, increasing soil damage and erosion. Better structured soils are more fertile and less vulnerable to loss from drought or flood, and our food security depends on being able to reduce the threat to soil. The microbiome is the living community that binds the soil together and gives them their most useful properties. There is a case for saying the industrial revolution, and by extension the world we live in now, was created because of symbiotic nitrogen fixers. Imagine what could be done if we only understood what all of the microbes are doing?