The microbiomes of things 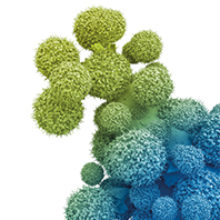 Microbiomes have always been with us, and have always played fundamental roles in how systems function. It’s just that we didn’t have a specific name for them, and we have only recently started to explore them in large numbers as sequencing technology has become cheaper and more high throughput.

One of the first mentions in the literature of microbiomes was in the 1988 book, Fungi in Biological Control Systems, edited by Michael Burge, in which John M. Whipps, Karen Lewis and Roderic C. Cooke reviewed mycoparasitism and included a section heading titled ‘Microbiomes, delivery systems and disease control’ in which they explored both aerial and soil microbiomes. Later in 1992, John Whipps, in a review of biological disease control in horticulture, mentions in his abstract, “Strategies for selection and direct application of microbial antagonists are reviewed for aerial, root and growing media/soil microbiomes.” However, it seems that Joshua Lederberg has been attributed with creating this neologism when one searches Google, but Jonathan Eisen, on his microBEnet site, has a nice potted history of the etymology of this word which clarifies the situation. The next mentions come 10 years later in a review by Fergus Shanahan and a conference communication from David Relman, and after that the usage starts to increase dramatically (Fig. 1).

Fig. 1. Numbers of articles which contain the word microbiome or microbiomes found on Scopus. 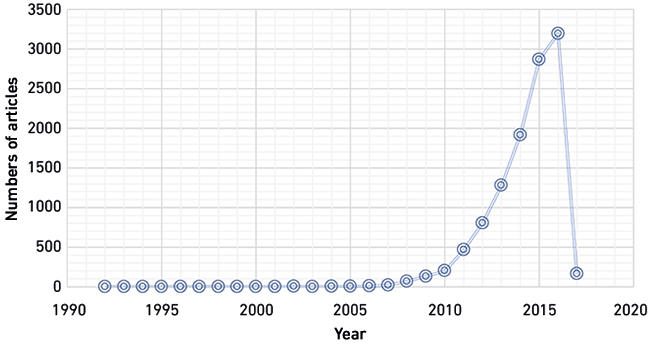 One current working definition of a microbiome is “the entire community of micro-organisms (bacteria, archaea, lower and higher eukaryotes and viruses) within a habitat and the surrounding environmental conditions.” This definition is derived from a recent discussion document that Jacques Ravel and I published in the journal Microbiome, with the aim to start a debate in the wider community on the terminology, as there is some confusion in the literature. 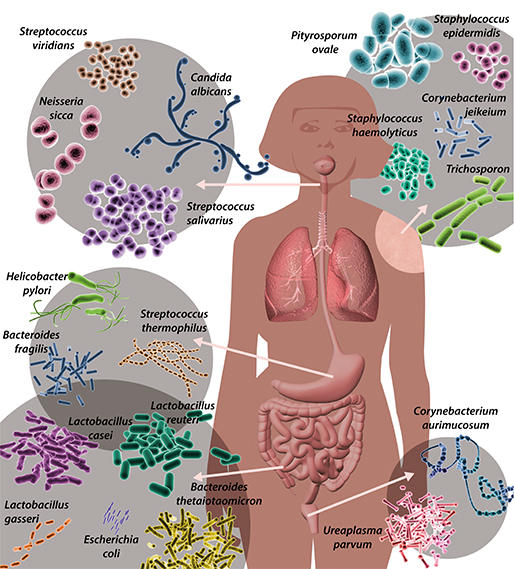 But how come we are now suddenly so excited by research into microbiomes and what they do? One of the simplest explanations is that we now have the tools to allow us to capture, at different omic levels, e.g. genomes, transciptomes and metabonomes, a whole microbiome and its microbiota and metagenome. We can look into a system across time and across multiple samples, and for the first time determine who’s there and what they are potentially doing, and what we have found is astounding. We are now able to take a holistic rather than reductionist approach to try and explain how different microbiomes are involved in ecosystem and biosystem function. One of the features of microbiome research is that it is based on a multi-disciplinary research model, unlike traditional microbiology, where a scientist can make a career looking at a single species. In microbiome research, due to the large and complex datasets, the microbiologist needs, for example, biological chemists to create the data for metabolite profiles, and physicists to help make sense of it and answer the research question set in the first place. For the first time we can start to try and map the interactions between different microbes and the surrounding system, and this approach is throwing up some challenging notions – for example, what is mammalian biology? Previously we would have considered it to be the interaction between the host’s genome and the environment, but now we need to include the metagenome of the microbiota with which we have co-evolved.

Of course, just like in microbiology, research into microbiomes has focused on the role of the microbiota in maintaining the healthy human status and how they are involved in diseases. Because of ‘The Human Condition’, we are very focused on any new situation that potentially can lead to improving the quality and longevity of life. To meet this need, the majority of microbiome research in the last 10–15 years has focused on understanding the role of the microbiota in human biology. Notable examples of this include the now-completed Human Microbiome Project and the MetaHIT project, both of which made significant contributions to our knowledge of how extensive the human microbiome is. One of the areas that most interests me is the role of the host microbiota in cancer, which has been referred to as the cancer microbiome or oncobiome. The microbiota in the gut microbiome have been implicated in playing a role not only in the initiation of colorectal cancer – by producing carcinogens or genotoxins which caused the ‘first hit’ in the oncogenes – but also in interacting with the developing adenoma as it evolves into a carcinoma. Recently, the gut microbiota has been hypothesised to be responsible for host response to cancer treatments such as the new immunotherapies being trialled.

However, while we all have a personal interest in understanding human microbiomes and how they influence health and disease, in the wider arena, environmental microbiomes are fundamental to global ecosystem functions, services and life. All of the major global geochemical cycles, for example the nitrogen cycle, would fail if specific microbiomes, which are responsible for keystone steps within the cycle, were perturbed in such a manner that they failed to fulfil their evolved roles. Using a microbiome-led approach will help us understand where we need to invest our efforts to ensure that these environmental cycles continue to support an ecosystem conducive to life.

We currently stand on the verge of an exciting new era in microbiology in which we have the potential to fully define the importance of microbes in supporting microbiome function, and how we can modulate it in order to maintain the services and improve them when we have destroyed them.