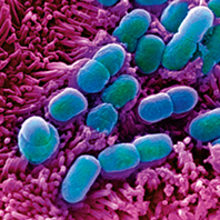 Travel always spreads disease. Bubonic plague reached Turkey in 1347 via the Silk Road, following an outbreak in 1330s China. By 1348, it raged in Italy, shadowing the gaiety of Boccaccio’s Decameron. By 1351, half of Europe lay in plague pits. One hundred and fifty years later, the conquistadors took smallpox to the Americas, decimating local populations. They returned – many believe – with syphilis, which ‘enjoyed’ its first European outbreak in 1495 among Charles VIII’s army, then besieging Naples. The French called it the ‘Neapolitan disease’ and carried it home. In England, it became the ‘French pox’ and in Tahiti, the ‘British disease’, imported by the Royal Navy.

Exponentially growing air travel (Fig. 1) accelerates the spread of bacteria. Travellers sample the local microflora – often more resistant than at home – as they eat, drink and swim, returning home colonised. What are often picked up are Escherichia coli with extended-spectrum β-lactamases (ESBLs), which confer resistance to modern cephalosporins. Population carriage of these is much higher in Asia and the Middle East than in Europe, Australasia or North America (Fig. 2). There is also circulation – particularly in India, but also Brazil – of bacteria with ‘carbapenemases’, which are β-lactamases able to hydrolyse the last-reserve β-lactams. These include the KPC, OXA-48/181 and NDM enzymes. Producers are often resistant to all ‘good’ antibiotics. 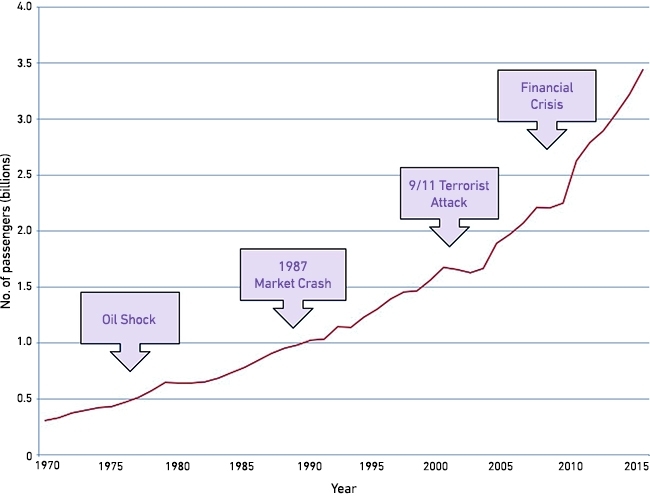 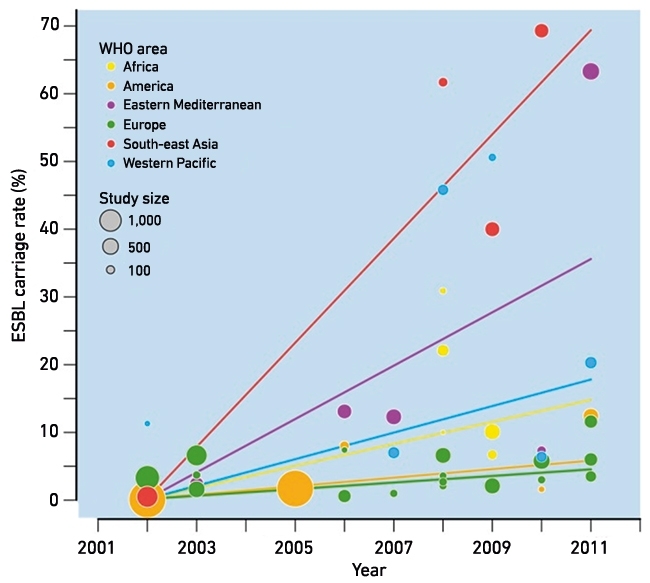 Colonising bacteria cross continents in the guts of returning travellers. Tangden and colleagues took rectal swabs from 105 Swedish volunteers, about to travel internationally, finding just one already with ESBL E. coli. One hundred of the remaining 104 provided a second swab on return, and 24 became colonised, including seven of eight who’d travelled to India and 10 of 34 who’d gone to East Asia. The ESBLs found were types prevalent in the countries visited – CTX-M-15 from India, CTX-M-14 from East Asia. Twenty-one of the 24 returned (!) for a third swab six months later and five remained colonised. Other studies have obtained similar results, and a meta-analysis found that travellers to South Asia stood an 88% chance of acquiring multi-resistant Enterobacteriaceae, increased by antibiotic use or diarrhoea, which disturb the gut flora. One-way travellers bring resistant bacteria too: 35% of unaccompanied migrant children screened in Germany late in 2015 carried ESBL E. coli. Colonisation by carbapenemase producers is rarer, but occurred in 3/824 travellers from France, all visiting India. In a different surveillance approach, Petersen & others sampled the toilets of aeroplanes arriving in Denmark, finding the lowest resistance gene burden in flights from Greenland and highest in those from South and East Asia (Fig. 3). 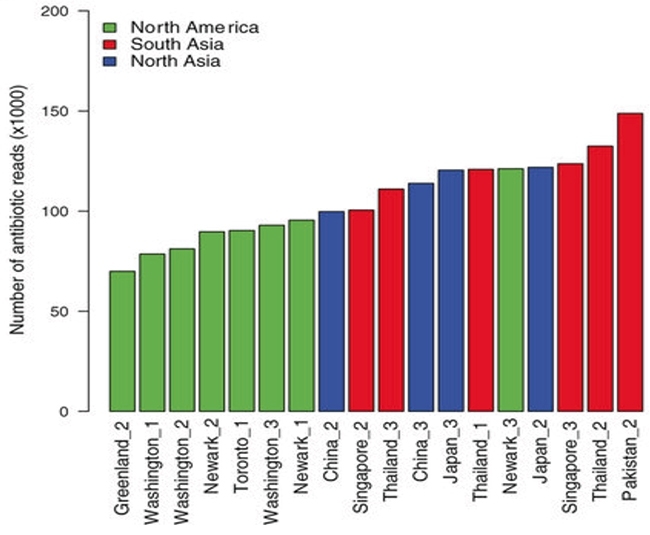 Colonisation is innocuous if the E. coli remains intestinal, but the gut seeds urinary and intra-abdominal infections. Pitout, in Canada, found that infections with cephalosporin-resistant E. coli mostly involved strains with ESBLs prevalent in countries visited.

Some travellers are hospitalised overseas following accident or illness; others travel specifically seeking medical services. Elderly UK residents with family ties to India or Pakistan divide lives and healthcare between countries. Middle-Eastern patients come to private London hospitals, whilst ‘corporate’ hospitals in India draw patients from Europe, Africa and the Middle East. In 2010, 63,000 UK residents travelled abroad for treatment including many to India (Fig. 4), which, in total, drew 1.27 million medical tourists in 2012, generating $1.8 billion in revenue.

Whilst many of the hospitals attended by medical tourists and accident victims provide excellent care, the fact remains that vulnerable patients are moving between low- and high-resistance countries. Moreover, by their nature, hospitals concentrate antibiotic selection pressure. At a medical college in northern India, 50% of intensive care patients were colonised with ESBL producers and 3% with carbapenemase producers. At Rawalpindi, Pakistan, 27% of inpatients and 17% of outpatients were colonised by Enterobacteriaceae with NDM (‘New Delhi Metallo’) carbapenemase in 2010.

NDM carbapenemases are interesting because we saw their early globalisation. They were first recognised in Sweden in 2008, carried by urinary Klebsiella and gut E. coli from a patient transferred a day earlier from New Delhi, India. In the subsequent 20 months, Public Health England received 29 Enterobacteriaceae, of multiple species, with NDM enzymes. These were from 25 patients, at least 17 of whom had visited the Indian subcontinent and 13 been hospitalised there, for reasons ranging from a road traffic accident to kidney transplants (Pakistan) to ‘tummy tuck’. Most were susceptible only to colistin and tigecycline. Publication was followed by a controversy in the Indian press about the enzyme’s name and a flurry of further international reports, many again describing patients who had visited the Indian subcontinent (Fig. 5). Reviewing the first 250 UK patients in 2013, we obtained a travel history for 100, finding half with travel to the subcontinent. Nevertheless the link is weakening: Public Health England now regularly sees NDM isolates from UK care home residents with no travel history, and there have been a few outbreaks in UK hospitals. Imported resistance is changing to low-level endemic…

Occasionally, a single import allows sharp expansion. Enterobacteriaceae with OXA-48 carbapenemase entered several European countries with casualties from the Libyan ‘Emergency’ of 2011. One became the index patient of an outbreak in a UK intensive care unit. Even starker was a Colombian patient who received a liver transplant in Israel, acquiring a sequence type (ST)258 Klebsiella pneumoniae with KPC carbapenemase. Back in Medellin he became the index case for a hospital outbreak, with 32 patients infected and 52 colonised.

KPC carbapenemases have a strong association with K. pneumoniae ST258 and its variants (Fig. 6), and the global spread of this combination of ‘high-risk clone’ and resistance likely reflects successive transfer events, as from Israel to Colombia, though most remain undocumented. Other high-risk clones have globalised too, notably E. coli ST131 with CTX-M-15 ESBL, but its story is more complicated as, unlike ST258 K. pneumoniae, this lineage often occurs without ESBLs and occasionally acquires different ESBLs besides CTX-M-15.

FIG. 5. REPORTED CASES OF PATIENTS WITH NDM ENTEROBACTERIACEAE, 2008–2012. DOTS COLOURED RED INDICATE THAT AT LEAST SOME CASES HAVE EPIDEMIOLOGICAL LINKS TO THE INDIAN SUBCONTINENT. 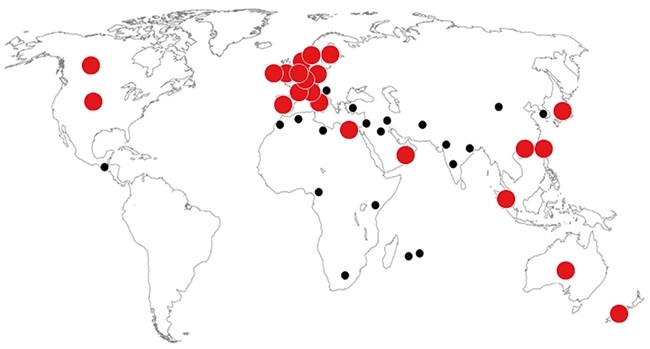 FIG. 6. COUNTRIES WHERE ST258 AND RELATED K. PNEUMONIAE WITH KPC CARBAPENEMASES HAVE BEEN REPORTED. 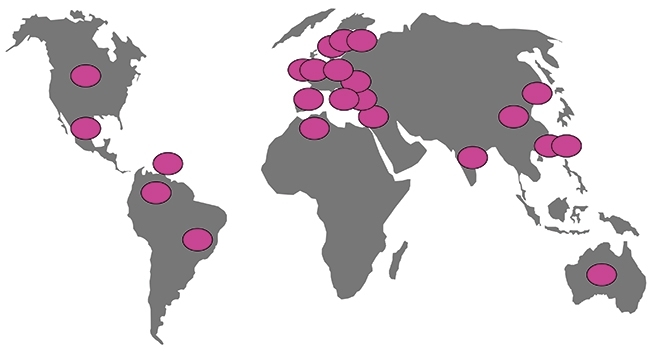 What can be done?

Can the globalisation of resistance be halted? The simple answer is ‘No’. You can’t stop people travelling or quarantine them. There is no reliable decolonisation strategy, and the duration of carriage is variable. Travellers who drank only bottled water and followed scrupulous hand hygiene were as likely to acquire ESBL E. coli as those who omitted these precautions, doubtless because others, who were less fastidious, prepared their food. Nevertheless, two approaches should be encouraged. First, it is vital to encourage countries with high antibiotic resistance to improve sanitation, reducing the circulation of resistant bacteria, and also to improve antibiotic stewardship and hospital infection control. The main beneficiaries will be for the local population, but the traveller will gain too. At the same time, healthcare providers in developed countries should recognise patients with a history of travel to high-resistance countries, when they are being admitted to hospitals, adapting empirical treatments and infection control precautions until the patient is confirmed not to be carrying unusually resistant bacteria.

Kumarasamy, K. K. & others (2010). Emergence of a new antibiotic resistance mechanism in India, Pakistan, and the UK: a molecular, biological, and epidemiological study. Lancet Infect Dis 10, 597–602.