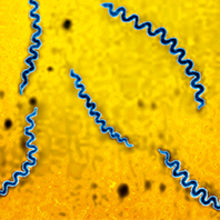 The 3rd of August 1492 marked the start of one of the most significant periods of global exploration, travel and migration. Setting sail from Palos on the Portuguese coast, Christopher Columbus, sponsored by King Ferdinand and Queen Isabella of Spain, headed westward bound for the Canary Islands. From the Canaries, Columbus continued his voyage. Thirty-five days after setting sail, he reached the Bahamas. His first landing point, on a small island, known as San Salvador, was used by Columbus as a base to explore and map the islands of this New World, before he and his crew returned to Spain in the spring of 1493.

As we still see today, large migrations of human populations are often accompanied by devastating outbreaks of disease. Over time, isolated populations can build up specific immunity patterns to indigenous diseases but they are often susceptible to new infections. Columbus’s exploration of this new world was no exception. Shortly after his crew's arrival, the indigenous population was decimated by epidemics of influenza and smallpox that swept across the continent. The evidence suggests that this was a mutual disease exchange; by 1495, Columbus and his crew arrived back in Europe and they brought the ‘Great Pox’ (as opposed to the ‘Small Pox’) with them. This ‘Great Pox’ soon gained notoriety because of the severity and location of its physical symptoms:

“boils that stood out like acorns, from whence issued such filthy stinking matter that who so ever came within the scent, believed himself infected” [Von Hutten (1519), translation from Major (1945) p31(5)].

Today we know this disease as syphilis thanks to Girolamo Fracastoro, the famous 16th century mathematician, physician and poet from Verona, who described a dreadful plague sent by a vengeful sun god to strike down the mythical shepherd Syphilis in his poem Syphilis sive morbus gallicus. This name has stuck to this day.

The Age of Discovery

Europe in 1495 was mid-Renaissance and experiencing a resurgence of literature, art, sculpture and architecture. But this was also a time of turmoil and change. Shortly after Columbus returned to Europe, the French troops of King Charles VIII were marching to besiege Naples in order to create a Mediterranean base to launch a Crusade. This was the start of the First Italian War. Soldiers and mercenaries were recruited from across Europe, along with more than 800 camp followers. It wasn’t long before the great pox emerged within their ranks. This ‘French disease’, as the great pox was soon rebranded, spread remorselessly across a wide swathe of the European continent. Recognising no borders and travelling eastwards into India, China and Japan, and south into the African continent, it collected several new names along the way. These names had one thing in common – an inherent desire to attribute this terrible disease to foreigners and aliens. The French named it the ‘Neapolitan disease’, the Russians the ‘Polish disease’, the Polish and the Persians called it the ‘Turkish disease’, and the Turkish called it the ‘Christian disease’. Further afield, the Tahitians named it the ‘British disease’ and in Japan it was known as the ‘Chinese pox’.

Syphilis is a sexually transmitted infection; the more sexual partners an individual has, the more likely they are to catch the disease. In the pre-antibiotic era syphilis was an extremely common disease that ravaged populations. In 1905, more than 400 years after the disease arrived in Europe, two German scientists, the zoologist Fritz Schaudinn and the dermatologist Erich Hoffmann, finally identified the bacterial agent responsible for this devastating disease. Treponema pallidum is a spirochaete, a delicate corkscrew-shaped bacterium that enters the body through micro-traumas and abrasions in mucous membranes.

The disease erupts in three stages. Primary syphilis, the first stage of the disease, manifests as a ‘chancre’ (or ulcer) appearing at the initial site of the bacterial infection. Left to its own devices, this ulcer usually heals, but unfortunately this isn’t the end of the infection; the disease re-emerges as secondary syphilis. The infected individual begins to feel unwell with a fever, a rash, and a sore throat. Once again, these symptoms can appear to improve spontaneously but they can be relapsing until finally the disease retreats, becoming latent and asymptomatic. Syphilis can lie latent and hidden for many years before emerging once again as tertiary or late syphilis. It is at this stage of the disease that the most severe symptoms appear. Syphilis damages the heart, causes gummy tumours that can appear in any body tissue including the bones, and causes neurological damage that can lead to mobility problems, dementia and insanity.

Syphilis can also be passed from mother to child. A pregnant woman infected with T. pallidum can transmit syphilis to her foetus via the placenta, and in a third of cases this can cause stillbirth and miscarriage. Infected mothers can also give birth to babies with congenital syphilis – a severe, disabling, and often life-threatening infection. 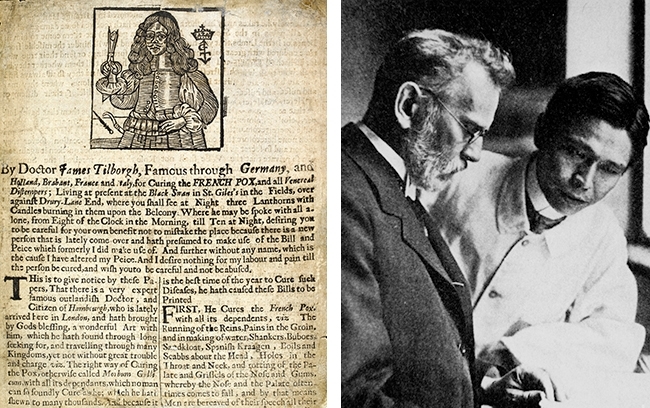 Syphilis treatment and cures: past, present and future

In 1516, Ulrich von Hutton, a German scholar plagued with syphilis, described one of the first treatments for this disease in his poem, De Morbo Gallico. Guaiacum, or holy wood, was brought from Central America to Europe in order to treat this noxious disease. It was not an effective cure, and alternative treatments such as sweat baths and mercury ointments and inhalations (sometimes both) soon became an accepted treatment. Although mercury had terrible side effects and many patients died of mercury poisoning, it remained the go-to drug for syphilis until 1910, when Paul Ehrlich, a German physician and Nobel prize-winning scientist, discovered the antisyphilitic effects of arsenic compounds. Ehrlich’s approach to treating infectious diseases like syphilis was radical. Instead of focusing on ameliorating the symptoms of syphilis, he decided to target the disease-causing agent, T. pallidum, curing the patient and the patient’s symptoms in the process. Ehrlich and his assistant, Sahachirō Hata, a Japanese bacteriologist, began to search for a ‘magische Kugel’: a ‘magic bullet’. They focused on screening a raft of arsenic-based synthetic dyes by methodically testing the compounds on syphilis-infected mice. Compound 606 soon emerged as a clear frontrunner and it was quickly marketed globally as Salvarsan™ and later, the improved Neosalvarsan™. Was Salversan™ the magic bullet that Ehrlich had hoped for? Well not quite; although it effectively destroys T. pallidum, the drug’s harmful side effects and complex treatment regime were significant issues. Eventually, a new treatment for syphilis emerged following the discovery of penicillin by Alexander Fleming in London, in 1928. By 1943, the production of penicillin had mostly moved to the United States. It was against the backdrop of mass migration caused by the Second World War that John F. Mahoney, Richard C. Arnold and Ad Harris at the US Marine Hospital, Staten Island, successfully treated four patients with primary syphilis. Later in 1984, Arnold wrote about his earlier work:

“Syphilis was once a dreaded and dreadful disease involving millions of US citizens. Before the introduction of penicillin, the heavy-metal cure often caused thousands of deaths each year. The morbidity and mortality of the disease itself was horrendous, involving all ages from the fetus to the elderly.”

During the golden era of antibiotic discovery, new alternative drugs to penicillin, such as doxycycline, azithromycin and clindamycin, also emerged to treat this disease. But sadly the optimism that the new antibiotic age would lead to the eradication of bacterial diseases like syphilis has been premature. Syphilis is not a disease of the past. On a worldwide scale, congenital syphilis is still a condition that affects pregnancy, causing serious health problems and death to babies. Current estimates indicate that in 2012, there were approximately 18 million cases of syphilis, with 5.6 million new syphilis cases in women and men aged 15–49 years globally. In the UK, the numbers of infectious syphilis diagnoses are at the highest since the mid-1950s, and this pattern is repeated on a global scale. Worryingly, although penicillin and its derivatives still remain an effective cure, we already have strains of syphilis that are now resistant to the newer, alternative drug treatments, such as azithromycin and clindamycin. The ‘Great Pox’ is still with us and serves as a stark reminder that prevention is still better than the cure.

Newman, L. & others (2015). Global estimates of the prevalence and incidence of four curable sexually transmitted infections in 2012 based on systematic review and global reporting. PLOS One 8:10(12), e0143304.