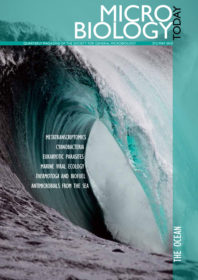 The lead articles of the May 2010 issue of Microbiology Today are on metatranscriptomics; cyanobacteria; eukaryotic parasites; marine viral ecology; Thermotoga and biofuel; and antimicrobials from the sea.

How do marine microbial ecosystems respond to climate change and pollution? Jack Gilbert explains how treating microbial marine communities as single cells in a metatranscriptomics approach could shed light on this fundamental question.

Cyanobacteria are the most environmentally significant group of bacteria on Earth. David G. Adams explains how in many ways life on Earth owes its very existence to this ancient group of micro-organisms.

Eukaryotic marine parasites could have a wide impact on marine ecology. Laure Guillou, Catharina Alves-De-Souza, Raffaele Siano and Humberto González describe the role of these parasites in processes as diverse as species competition, carbon cycling and gene transfer.

Amazingly, all the phages on Earth, if placed end to end, would probably extend a distance equivalent to that of the nearest 60 galaxies. K. Eric Wommack explains how metagenomics is gradually revealing the amazing diversity and abundance of viruses in the biosphere.

Some of the most hyperthermophilic bacteria are found within the genus Thermotoga. Niels Thomas Eriksen, Thomas Marius Nielsen, Nikolaj Kyndby Holm and Martin Leegaard Riis explain how these properties could make these micro-organisms promising new sources of biofuels.

The ocean is teaming with sunken treasure and for some treasure hunters the sand itself is the target. Jem Stach tells how novel actinomycetes on the seabed could be a source of much-needed novel antimicrobial drugs.

Howard Gest discusses how the validity of using the 16S ribosomal RNA gene as the basis for bacterial taxonomy has been further called into question following a recent evaluation of the complexities of evolution.

SGM hits the road with a series of one-day workshops in primary schools around Belfast in conjunction with Queen’s University Belfast to teach school children some fascinating microbial facts. SGM also celebrates a landmark year for education with the launch of a completely redesigned, highly visual, interactive website for both students and teachers of microbiology and the launch of a new key stage five resource.

Paul Hoskisson describes the road to his fulfilling career as a university lecturer and the intellectual freedom and challenges of running his own research group. Alison Graham describes her day debating the state of science in the media and the responsibility of scientists to be good sources of information.

SGM ventures to north-west England to demonstrate the importance of good hand washing at the Big Bang science fair, and Dr Gerard Fleming describes his experience of working with the media when a press release issued from the SGM got picked up by reporters around the world.