Consequences of climate change on microbial life in the ocean 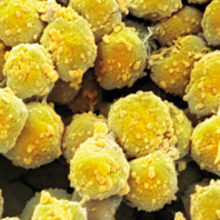 Almost 2,400 years ago the Greek philosopher Aristotle would visit fishermen early in the morning to observe and systematically classify marine life with his naked eye. Unfortunately for Aristotle and the centuries of scientific inquiry that followed him, the naked eye is a woefully inadequate instrument for observing the vast majority of life in the sea. Covering over two-thirds of the Earth’s surface and having an average depth of nearly four kilometres, the ocean represents 97% of the planet’s biosphere. Examined under the microscope, every drop of seawater is the habitat of thousands upon thousands of tiny single-celled micro-organisms. Multiplied by the volume of the ocean, there are an unimaginable 1029of these microbial cells. The vast majority of the ocean’s biodiversity is comprised of microbial species.

Microbes and the marine food web

In the sunlit top layer of the ocean, plant-like micro-organisms called phytoplankton use the energy of the sun to combine carbon dioxide with water, making organic matter and – as a lucky metabolic byproduct – oxygen. Given the size of the ocean, it is not surprising that we can thank these phytoplankton for supplying half the oxygen we breathe. This primary production is also a cornerstone of the ocean food web analogous to plant production on land. The phytoplankton are consumed by small grazers, who in turn are eaten by others, including crustaceans, fish, and ultimately mammals such as whales and the polar bear.

What happens to the carbon fixed by phytoplankton and consumed by higher trophic levels? One possibility is that it simply sinks to the seafloor in its various forms, ranging from dead phytoplankton to blue whales. Most of it won’t reach the bottom. Why? Because phytoplankton are not the only micro-organisms in the ocean. There is a second microbial cornerstone of the ocean food web known as the heterotrophic bacteria and archaea, tiny and diverse cells simply referred to as bacterioplankton. If you have ever left a head of lettuce or a leg of chicken in your refrigerator, only to return and find a pool of brown ooze and a rotten stench, then you are already familiar with the role bacterioplankton play in the marine food web. They are responsible for a process known as remineralisation, the breakdown of complex organic matter to carbon dioxide and essential inorganic nutrients (ocean fertilisers, if you will).

So, why doesn’t the ocean stink? Well, in some places it does. At highly productive coastal locales where plenty of nutrients are welled up from the deep water by the winds, the slow remineralisation of macroscopic organisms produces those stinky byproducts of organic matter decay. But, in the massive clear surface waters of the open ocean, primary production is tightly coupled to remineralisation; organic matter directly released from phytoplankton is rapidly consumed by bacterioplankton, complicating and limiting carbon and energy transfer up the food chain. Some of the carbon goes into building new bacterioplankton cells, but a great deal is returned to the water and atmosphere as carbon dioxide. In effect, the cells ‘burn’ the carbon to produce the energy required for survival and reproduction. At the same time, bacterioplankton play a critical role by regenerating the nutrients required to sustain primary production.

The organic matter that escapes recycling at the surface is still transformed by bacterioplankton on its long journey to the deep ocean. Some is remineralised to carbon dioxide, releasing nutrients in the deep ocean. The deep ocean is effectively a rich fertiliser that, when mixed back up into the sunlit surface waters, stimulates phytoplankton growth. Some carbon is transformed into complex organic compounds that are not accessible to further degradation by bacteria or any living organisms. This recalcitrant organic matter drifting around in the deep ocean is the largest carbon reservoir on Earth. In fact, about 15% of the organic matter produced in the surface ocean is pumped by marine organisms into the deep, where it is ‘stored’ for thousands of years. This biological pump, mediated by micro-organisms, can be thought of as a massive carbon processing system that effectively scrubs carbon dioxide from the atmosphere.

FALSE-COLOUR SATELLITE IMAGE OF EARTH'S BIOSPHERE, SHOWING THE DISTRIBUTION OF VEGETATION ON LAND AND PHYTOPLANKTON IN THE OCEANS. THE COLOURS REPRESENT CHLOROPHYLL DENSITIES: FROM RED (MOST DENSE) THROUGH YELLOW AND BLUE TO PINK (LEAST DENSE) IN THE OCEANS; AND FROM DARK GREEN TO PALE YELLOW ON LAND. 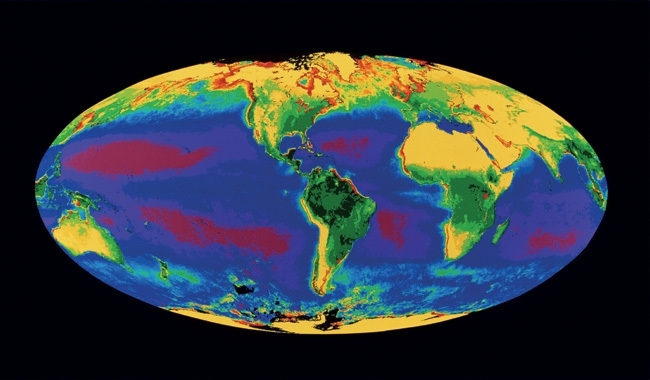 Under the right conditions some of the organic matter reaches the seafloor and becomes buried. Millions of years later it is transformed into the oil that we use to fuel vehicles and make plastics. Over geological time scales primary production at the ocean surface has the additional effect of storing carbon deep in the Earth, only to be released en masse by humans later in time.

In this way, phytoplankton and bacterioplankton play a crucial role in the global carbon cycle, the circular path by which carbon flows from the atmosphere into the biosphere, land, ocean and back again. In fact, since the beginning of the 19th century, the ocean has devoured about half of the carbon dioxide emitted from burning fossil fuels, offsetting accumulation of this greenhouse gas in the atmosphere. Some oceanographers have estimated that if the microbes in the upper ocean stopped pumping carbon down to the deep sea today, atmospheric carbon dioxide levels would eventually climb another 50% from their present state, accelerating global warming further. One is then left to wonder: will global warming influence these critical microbes? And if so, will microbial activities accelerate or reduce the impact of global warming?

The ocean regulates Earth’s climate. Among other ways, it does so by exchanging heat with the atmosphere, storing it and distributing it around the globe. As the atmosphere warms so does the ocean – the surface layer most rapidly. Although far from certain, several studies have predicted the consequences of global warming on marine microbial communities. One line of reasoning goes like this: as the ocean surface warms it becomes less dense and tends to float on top of the cold nutrient-rich deeper water. Without replenishment of the nutrient fertiliser from below, phytoplankton in the warm top layer will starve, leading to reduced primary production and a corresponding decrease in carbon pumping to the deep sea. Is there evidence for this? Yes, scientists can use satellites to measure changes in phytoplankton productivity at a global scale. Over several years, they have shown that sea surface warming in stratified regions of the ocean is accompanied by reductions in productivity. This is not good news. However, the story is far from that simple. On a perhaps more positive note, primary production may in fact increase at high latitudes as chilly waters warm.

Size matters too. Research shows a significant negative relationship between temperature and phytoplankton cell size. In the Arctic, an ocean facing a particularly large and rapid period of change, the smallest species of phytoplankton are blooming while larger species are wilting away. Smaller cells have a higher surface-to-area ratio, providing more effective acquisition of nutrients. The problem is that large cells sink more quickly than smaller ones. So if projections are true and phytoplankton cell size will decrease with global warming, then we may see a further decrease in carbon pumped into the ocean interior due to a shift to smaller, more buoyant cells.

Of all the microbes in the sea, phytoplankton have received the most attention. What about those heterotrophic bacterioplankton? Can we predict their response to a warmer ocean? Maybe, but the critical data on their distributions and activities in the ocean and through time is much more sparse than for phytoplankton. One way of looking at it is to treat bacterioplankton as a black box: organic matter enters the box, carbon dioxide and nutrients exit the box. This bulk process has been measured for many years in many places. From this data, the general prediction is that as temperatures rise in the open ocean, this process will tend to increase. Of course it is much more complicated than that, but if true, it seems that in a warmer ocean microbial processes will play an even more important role in the carbon cycle.

Peering into the microbial black box with genomics

What happens if you open that microbial black box and peer inside? In the early 2000s, marine microbiologists began applying genomics to studying the biodiversity in the sea. By sequencing DNA extracted directly from the microbes in seawater and analysing the genes, new forms of metabolism were discovered. In a classic study, scientists discovered genes for phototrophy – the process of harvesting energy from light – in bacteria previously assumed to rely exclusively on organic matter for energy. Even more exotic metabolisms have since been discovered in the sea. There are bacteria that use noxious hydrogen sulfide as an energy source, and archaea that use ammonia in the same manner. Both use organic matter as a source of carbon, but also fix carbon dioxide in much the same way as phytoplankton. These studies and others have demonstrated bacterioplankton play a much greater and more complicated role in marine food webs than simply breaking down organic matter and recycling nutrients to phytoplankton. The challenge is to understand how such newly discovered microbial life forms fit into the marine food web and influence biogeochemical cycles. Until we know, we can only speculate on how they are influenced by climate change.

Microbes as sentinels of change

The microbial world is often left out of discussions of climate change but as critical players in the carbon and other biogeochemical cycles, their responses to global warming demand attention. More worrying, climate change is leading to a warmer ocean, but an ocean that is also changing in other profound ways. Carbon dioxide accumulation is leading to ocean acidification. Oceanic stratification is resulting in the expansion of oxygen-depleted dead zones. At present, the jury is out on how microbial food webs and biogeochemical cycles will be influenced by these fundamental changes to Earth’s largest ecosystem.

As a final note, studies are beginning to show marine microbes could serve as sentinels to monitor climate change effects on marine ecosystems. If so, there is a critical need for long-term time-series biological measurements of marine environments if we are to accurately predict change. We may have come a long way since Aristotle, but much about the microbial ocean remains a mystery.