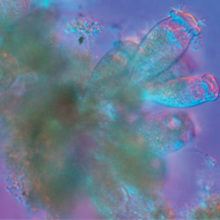 Processes for the treatment of used water involve fascinating microbiology, as they show how we control the impact of microbes on us and how we use them to control our impact on the environment. Examples include breaking the cycle of water-borne disease, such as protists that remove the causative agents of cholera and typhoid, as well as microbes involved in environmental protection where organic matter is mineralised and the mineralised nutrients are removed. In addition, a variety of processes harness the metabolic capabilities of bacteria involved in the phosphorous and nitrogen cycles. Furthermore, methane synthesis is used to destroy waste organic matter, using a complex community of bacteria and archaea, and thus capture this powerful greenhouse gas for use as fuel.

Development of treatment processes and conveyance systems for drinking water and sewage by Manchester Corporation towards the end of the 19th century was pivotal in breaking the cycle of water-borne disease in the world’s first industrial city. Conveyance of sewage to the Davyhulme treatment works resulted in the reduction of both microbial contamination and rat populations in the city. Contamination with Vibrio cholerae or Salmonella typhimurium could cause cholera or typhoid in anyone drinking infected water drawn from wells or streams. Rats carry disease and fleas, which can be infected with Yersina pestis, the causative agent of bubonic plague.

The trickling filter (TF) process for sewage treatment was first used in Salford in 1893 and the activated sludge (AS) process was developed at Davyhulme in 1914. The TF technology was commercialised by the pioneering Manchester engineering company Mather and Platt. And the AS process was developed by Fowler, Ardern and Locket while members of the Manchester Corporation Rivers Department. These two treatment processes are now used worldwide, which has resulted in widespread improvements in human and environmental health. 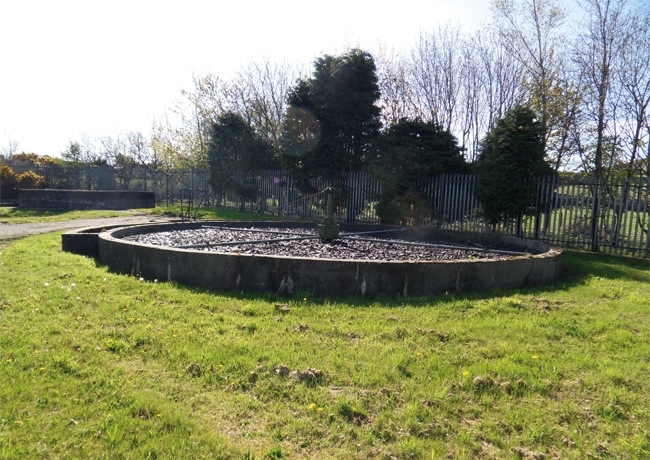 Recently, innovation of processes for used water treatment has moved abroad, especially to the Netherlands where Delft Technical University has pioneered processes associated with nutrient removal, for example. This change in location of innovation is often considered to be an unforeseen consequence of privatising the UK water industry, and the risk-averseness engendered by the necessary joint regulation of prices and environmental protection imposed by the UK government.

Politics aside, the purification of used water occurs mainly through the joint metabolic activities of protists, bacteria and archaea. Protists, such as protozoa and rotifers, are largely responsible for the removal of pathogens, through either filter-feeding or grazing. For example, in the 1970s, a UK study demonstrated that protozoa in the AS process were responsible for filtering the water 10 times as it passed through this process. These eukaryotic microbes are also important in maintaining system health, through control of the benign, prokaryotic microbial populations, namely the mixed bacterial or archaeal communities involved in the various treatment processes.

Nowadays in the UK, on average, each person uses about 150 litres of water per day. After use, this water must be cleaned before it is returned to the aquatic environment, so that public health and aquatic organisms are protected. Complex communities of heterotrophic bacteria are responsible for reducing aquatic pollution through mineralisation of nutrients following metabolism of the complex organic matter found in sewage. Otherwise, excessive growth of similar microbes in the receiving water would lead to anoxia, the death of fish and further degradation of the waterway.

Heterotrophic bacteria are also essential for a phosphate-removal process that is more sustainable than older processes involving chemicals for its precipitation, prior to removal by sedimentation. Phosphate is an essential plant nutrient but, unless it is removed, eutrophication of the receiving water can result in excessive growth of cyanobacteria, algae and other photosynthetic protists, such as dinoflagellates. These organisms can cause unsightly blooms, many of which are toxic to other organisms. The poisoned organisms are mostly aquatic but can include humans consuming contaminated aquatic organisms, as well as animals drinking contaminated water.

Especially when nitrate is absent or at low concentration, cyanobacteria fix nitrogen and thus thrive in phosphate-enriched waters, as demonstrated in the Experimental Lakes Area study in Canada. This led the Canadian authorities to impose strict discharge limits on phosphate but not nitrate, which can help to keep phosphate locked up in sediments. The rest of the developed world has followed Canada’s lead on strict controls on phosphate removal but has yet to follow its science-informed lead of allowing nitrate to be discharged to reduce the potential release of phosphate from sediments. 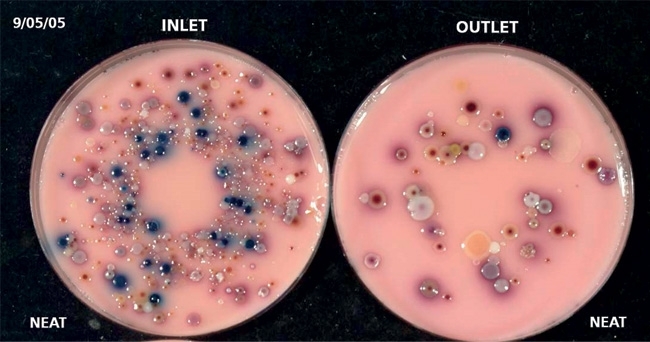 Two groups of autotrophic bacteria are responsible for oxidising potentially toxic ammonia to relatively safe nitrate, namely the ammonia and nitrite oxidisers. Ammonia is released from organic matter mainly during deamination of amino acids by heterotrophic bacteria, and is not usually fully nitrified in conventional TF and AS processes because the nitrifiers are slow-growing and cannot compete for oxygen with the heterotrophs. Therefore, a separate process is often used to allow complete nitrification, especially at large works with high ammonia loads. In contrast, heterotrophic bacteria are used in conventional denitrification, for removal of nitrogen from the aquatic environment. Here, nitrate is used as the terminal electron acceptor in anoxic respiration, so that nitrogen gas is returned to the atmosphere.

Research at Wageningen Agricultural University in the 1980s led to the discovery that three groups of microbes were largely responsible for anaerobic digestion: hydrolysers, liquefiers and methanogens. In turn, this led to engineers developing a two-stage process that reduced the time required for anaerobic digestion. The hydrolysers and liquefiers were mostly responsible for activity in the first stage, and methanogens for the second stage. More recently, engineers have developed multi-step processes for anaerobic digestion, including a thermal hydrolysis step that effectively ‘cooks’ the organic matter, thus making it more available to the microbes.

In the 1970s, a microbial ecologist contended that there ought to be a group of microbes that oxidise ammonia using nitrate, effectively a short-cut of the nitrogen-cycle predicted from thermodynamics. Observation in the late 1980s of an unusual, deep-red biofilm in a fluidised bed bioreactor treating wastewater at a Gist-Brocades factory in Delft eventually led to the identification of a new group of Planctomyces bacteria by a group of microbiologists at Delft University of Technology. Engineers have developed processes using these anammox (anaerobic ammonium oxidation) bacteria for denitrification that use less energy for aeration in a partial nitrification step and have no requirement for organic carbon for denitrification, thus saving considerable costs.

Biological treatment of used water begins with separation of solid from liquid waste, through sedimentation of a primary sludge. The liquid waste is aerated so that protists can consume pathogens and particulate organic matter, whilst heterotrophic microbes grow on the dissolved organic matter. These microbes are sedimented as a secondary sludge and combined with the primary one, often for anaerobic digestion. The clarified water is then either discharged or further treated to nitrify, denitrify or remove phosphate, depending on local conditions. Essentially, the technology is designed to allow microbial growth processes to treat the water we use in the home and industry so that it is clean enough to be returned to the aquatic environment, where natural processes complete its purification. 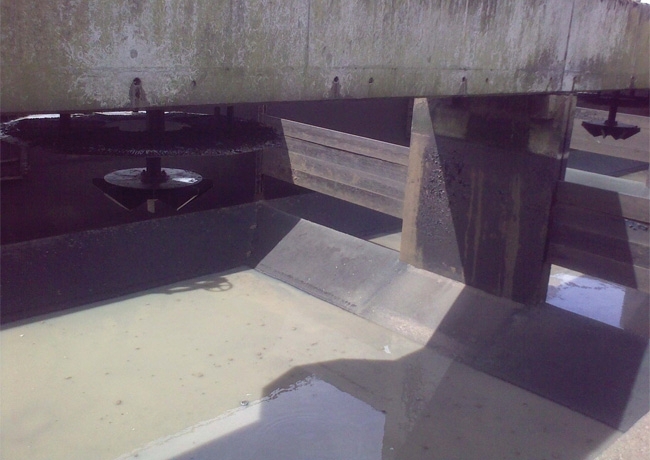 Continued research to identify the micro-organisms involved in biological processes for treatment of used water and to investigate their metabolism will lead to further development of new processes in collaboration with process engineers. Furthermore, development of more sustainable, lower-cost processes will help us to achieve the UN’s Millennium Development Goals of reducing global poverty by making biological treatment of used water more affordable.