Aquaculture is the rearing of aquatic species under controlled conditions, and includes the production of fish (carp, salmon and trout, and tilapia predominate), shellfish (particularly penaeid shrimp, oysters and clams), plants (seaweeds), alligators, amphibians, crocodiles and turtles. The process includes self-contained processes starting with the acquisition of eggs and sperm (milt) from dedicated brood stock through to market-sized individuals, such as Atlantic salmon (Salmo salar). Aquaculture also involves the capture of juveniles from the wild with subsequent ongrowing to adult size in contained facilities. This is presumed to have been the original method that initiated aquaculture. Love it or hate it; aquaculture is an old, well-established industry, and it is here to stay.

The origin of aquaculture

Aquaculture may be traced back to common carp (Cyprinus carpio) culture in China, which is considered to have been developed during 2000–1000 BC. Fan Lai (a politician turned fish culturist, in ancient China during the 5th century BC) wrote a landmark publication on fish culture in ~500 BC; this was the earliest known monograph on carp culture. Since then, aquaculture has expanded to most countries, particularly in the years after the Second World War.

The reasons for aquaculture

The commonly held belief is that aquaculture provides food for the masses in developing countries, and high-value species, e.g. flounder and turbot, for the richer members of society. However, in addition, aquaculture is used to produce:

•     animals for re-stocking waterways for subsequent capture by anglers
•     ornamental fish, e.g. goldfish and Koi carp, for the pet industry
•     specimens for biotechnology (to prevent the harvesting of possibly rare species from the wild)
•     rare species for release into the aquatic environment, to protect biodiversity.

The size of the industry

Currently, more than 220 aquatic species are cultured, with the total worldwide production amounting to over 90 million tonnes in 2012 (Table 1). Ten of the top 14 aquaculture-producing countries are in Asia (Table 1); Norway having the highest production (of Atlantic salmon) in Europe. This global amount compares with just over 92 million tonnes of aquatic products obtained from harvesting wild species. The prediction is that aquaculture will continue to grow (the current annual growth rate is around 7% in all areas except sub-Saharan Africa, the Arctic and Antarctic), and quickly overtake the harvesting of wild species, and become the dominant provider of aquatic plants and animals, worldwide.

Aquaculture in the UK

In England, the total aquaculture production is ~20,000 tonnes, with rainbow trout (Oncorhynchus mykiss) as the predominantly farmed species. In contrast, production of the dominant species, Atlantic salmon, has soared in Scotland to 164,000 tonnes with a value of £550 million in 2012. With the added value of smoked salmon, aquaculture has become the biggest agricultural export product in Scotland, and looks likely to grow even bigger. Indeed, the Scottish Government has set aquaculture ambitious targets for 2020, i.e. a 50% increase in Atlantic salmon production to 210,000 tonnes and a doubling of shellfish production to 13,000 tonnes.

Aquaculture may occur in freshwater, estuarine or marine habitats, and involve pond (Fig. 1), tank (Fig. 2) and cage culture systems (Fig. 3) for fish, ponds and tanks for shrimp, and ropes suspended in the water column for bivalves. Ponds are essentially holes in the ground that may be lined with concrete or plastic; tanks may be on the surface or sited in the ground. There is a long-term goal to move marine cage production well offshore into deep water, although there are engineering issues, such as resilience to storms, that need to be overcome. Sites range in size from those capable of producing a few tonnes up to those producing thousands of tonnes. The former may provide production locally for restaurants or village communities whereas the larger sites serve national and international markets. A topical example includes the catfish (Pangasius, also known as river cobbler), which is farmed extensively in the Mekong Delta of Vietnam, and sold widely in British supermarkets.

FIG. 1. CONCRETE-LINED PONDS USED FOR THE PRODUCTION OF TROUT IN SOUTHERN BULGARIA. 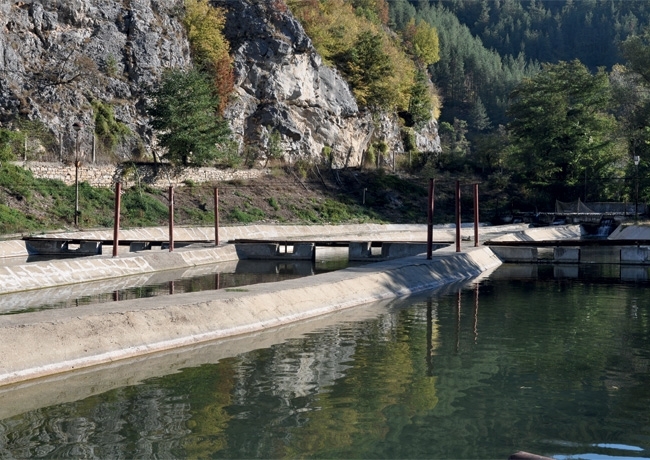 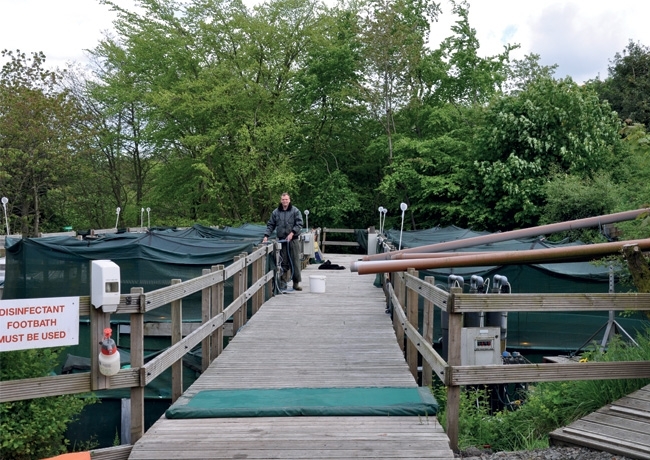 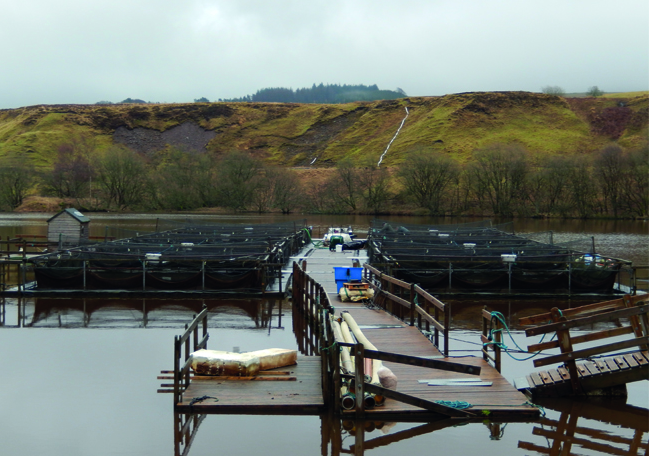 In many parts of the world, aquaculture sites are located so close to each other that effluent from one site is the inflow for another. This raises the problem about the spread of disease: these challenges include those of a microbiological nature.

It is speculative how much production may be lost to spoilage after harvesting, with culprits including Shewanella putrefaciens, which produces trimethyl-amine from trimethylamine oxide in fish tissues. Trimethylamine is odorous, and is a characteristic indicator of spoilage.

A wide range of organisms, including bacteria, viruses and eukaryotic parasites, are associated with disease, which may decimate production and render the survivors unsalable because of the presence of unsightly lesions. Epidemics do occur, and may have profound consequences for local economies. For example, infectious salmon anaemia, a Listed Disease by the World Organization for Animal Health, was the latest in a long line of diseases that devastated Chilean salmon production during 2007–2011 when production plummeted by several hundred thousand tonnes, leading to the loss of jobs and social unrest in the rural areas of the south.

First reported in 2009, early mortality syndrome (EMS) has spread across Asian shrimp production, notably white-leg and black tiger shrimp, causing heavy (up to 100% within 30 days) losses in China, Malaysia, Thailand and Vietnam. The condition is infectious, and has been linked with Vibrio parahaemolyticus. EMS has followed on from white spot syndrome (caused by Whitespot Syndrome Baculovirus complex), which led to the virtual collapse of the shrimp farming industry in China during 1993, spreading across southern and eastern Asia by 2011, and resulting in substantive losses.

Aeromonas salmonicida, which is the cause agent of a haemorrhagic septicaemia termed furunculosis, has been a major problem of salmon and trout culture in the UK, although currently it is less problematic. Instead, the organism may be found in carp culture, particularly in Eastern Europe where it causes unsightly ulcers, including a condition known as carp erythrodermatitis (Fig. 4).

FIG. 4. CARP ERYTHRODERMATITIS. THIS DISEASE IS ATTRIBUTED TO AN ATYPICAL FORM OF A. SALMONICIDA.

The threat of disease has prompted detailed research into the development of suitable control measures. From the previous dominance of antibiotics and other antimicrobial compounds, attention has moved towards water treatments/disinfection, vaccines, immunostimulants and better management regimes. In Asia, much work has focused on the benefit of probiotics and plant products that confer health benefits, including protection against specific diseases.

Fortunately, there is only limited evidence for the occurrence of human diseases resulting from exposure to aquaculture. There is some evidence for Aeromonas, Edwardsiella, Erysipelothrix, Mycobacterium, Streptococcus and Vibrio infections resulting from exposure to fish or shellfish. In 1996, the Toronto Star reported seven Streptococcus iniae infections in humans after buying and handling tilapia. The presumption was that the organism moved from the tilapia to the humans. A second example is Vibrio vulnificus, which may infect humans leading to fatalities through the consumption of contaminated molluscs. To re-iterate, the incidences of these infections is mercifully rare.

It is predicted that aquaculture will become the dominant provider of aquatic species for consumption, re-stocking, visual display (pet fish) and biotechnology. However, it is essential that we strive for a resilient and sustainable industry that has minimal impact on other users of the aquatic environment.