Archaea and the meaning of life 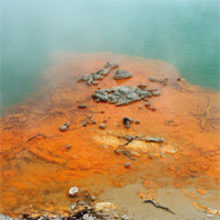 Humans are inordinately fond of dividing things into two – our approach to taxonomic classification is no exception. The earliest system published by Linnaeus divided living organisms into animals and plants, and by the 1960s this was superseded by a more fundamental split between prokaryotes and eukaryotes. So it should come as no surprise that the idea of a third domain of life – Archaea – met with fierce resistance when it was proposed in the 1970s.

A brief history of Archaea: 1977 to present

Archaea are widespread on Earth yet relatively little is known about them, outside of the select groups of people that study these fascinating organisms. They are a mystery that is being slowly unravelled since their ‘discovery’ in 1977 by Carl Woese and his group, including George Fox, while working at the University of Illinois.

Methanogens (archaea that produce methane) and other groups of micro-organisms, including halobacteria (now called halophilic archaea) as well as thermophiles, had already been discovered, but they had been misclassified under the domain Bacteria. Woese found that these organisms did not just share a love for extreme environments, but also that they are phylogenetically related to each other. However, he was surprised to find that they are fundamentally distinct to bacteria.

Woese was using small-subunit rRNA (ribosomal RNA) to build a new phylogenic tree. Small-subunit rRNA is an essential component of all self-replicating organisms and shows remarkable sequence conservation. This made it a perfect choice for a molecular chronometer. At the time this molecular approach to phylogeny was novel – previous methods relied instead on visible characteristics such as cell shape or growth conditions. Woese found that the prokaryotes are not one coherent domain, but are made up of two distinct groups: Bacteria and Archaea. At the time they were named ‘Eubacteria’ and ‘Archaebacteria’, respectively, but these two groups of prokaryotes were found to be no more similar to each other than they were to eukaryotes. Woese proposed that the tree of life has three equal branches – Archaea, Bacteria and Eukarya – and that the term ‘prokaryote’ should be abandoned because it has no taxonomic meaning. Unsurprisingly, his ideas were not universally popular.

As with any new discovery there are sceptics, but biochemical data from Wolfram Zillig supported the 16S rRNA data collected by Woese. Over time, the new domain of Archaea was accepted by the scientific community. Interest in archaea increased further after whole genome sequencing took off in the 1990s, and researchers increasingly switched from bacteria or eukaryotes to working on these exotic micro-organisms. But contrary to popular belief, not all archaea are extremophiles. They have also been found in ‘normal’ environments such as soil and the ocean, and in environments where they cohabit with bacteria. For example, in the human gut archaea are responsible for producing methane! However, unlike bacteria, no pathogenic archaea have ever been found.

Almost 40 years have passed since their reclassification into a new domain but still many more species of archaea are being discovered. DNA sequencing has improved dramatically, meaning that archaea no longer have to be cultured to be characterised. This has led to the discovery of entirely new lineages. Based on phylogenetic data (16S rRNA and other genes) the domain Archaea was originally split into two groups; the Euryarchaeota and the Crenarchaeota. However, since 2006 three more lineages have been discovered: Thaumarchaeota, Aigarchaeota and Korarchaeota. These three new groups are often combined with the Crenarchaeota to form the ‘TACK’ superphylum (more on this later). Even more recently there have been reports of new lineages of ‘nano’ archaea, which are characterised by a small cell size with very few genes. The constant unearthing of new species and groups make the Archaea a very fluid domain, with the phylogenetic tree changing as each new discovery is made.

TIMELINE OF ARCHAEA FROM THEIR DISCOVERY TO PRESENT DAY.

The origins of life?

Archaea may look like bacteria at a first glance and there are certainly many superficial similarities, but dig deeper and archaea have more in common with eukaryotes. In fact, it is now widely accepted that archaea are the ancestors of all eukaryotes.

Archaea, like bacteria, are single-celled organisms with a circular double-stranded DNA genome, and they have neither a nuclear membrane nor organelles. This means that they are similar to bacteria in terms of cell structure, although there are differences. Archaea do not have a bacterial-style cell wall and their plasma membrane is different to that found in both bacteria and eukaryotes. But on the inside of the cell, archaea show a striking family resemblance to eukaryotes. This is especially so for the enzymic machinery that processes genetic information – DNA packaging and replication, transcription into RNA, and translation into protein. All of these processes are essentially the same in archaea and eukaryotes, and are quite distinct from bacteria.

This prompts the question: if archaea are more closely related to eukaryotes than bacteria, then how do they fit in the tree of life?

The phylogenetic tree proposed by Woese was split into three equal domains, with Archaea and Eukarya sharing a common ancestor that had already diverged from Bacteria. However, biologists working on the origins of life have recently concluded that Eukarya and Archaea are not sister groups. Instead, eukaryotes are the direct descendants of archaea, and our long-lost ancestor belongs to the ‘TACK’ superphylum of Archaea. One of the most exciting new discoveries of the last year was the identification of a ‘missing link’ between Eukarya and Archaea. Called Lokiarchaeota, they were found near a hydrothermal vent at a site known as Loki’s Castle in the Arctic Ocean.

Can we use our knowledge of archaea to trace the origins of complex life? Eukaryotic microfossils can be dated back to 1.8 billion years ago but biological methane has been found in rocks that are 3.4 billion years old. The only source of biological methane is methanogenic Euryarchaeota, so we know that archaea have been around since the very beginnings of life on Earth. As for life on other planets, it is tempting to speculate that archaea may have also colonised Mars – evidence is mounting that methane in the Martian atmosphere has a biological origin.

DR THORSTEN ALLERS FROM THE UNIVERSITY OF NOTTINGHAM EXPLORES HOW THESE FASCINATING MICRO-ORGANISMS WERE FIRST DISCOVERED – AND HOW THEY HAVE EVEN MADE US RECONSIDER OUR OWN PLACE ON THE TREE OF LIFE.

What do the recent discoveries mean for us humans? Given our desire for dichotomy, we should be relieved that the tree of life has been pruned back to just two primary branches – Bacteria and Archaea. And more than anything else, we should give credit to Carl Woese, whose taxonomic revolution has allowed us to trace our ancestors all the way back to their humble beginnings as archaeal cells.