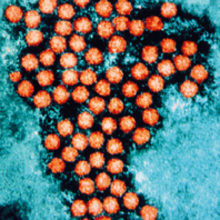 What does it mean to be ‘alive’? At a basic level, viruses are proteins and genetic material that survive and replicate within their environment, inside another life form. In the absence of their host, viruses are unable to replicate and many are unable to survive for long in the extracellular environment. Therefore, if they cannot survive independently, can they be defined as being ‘alive’?

Taking opposing views, two microbiologists discuss how viruses fit with the concept of being ‘alive’ and how they should be defined.

No, viruses are not alive

In many ways whether viruses are living or non-living entities is a moot philosophical point. There can be few organisms other than humans that have caused such devastation of human, animal and plant life. Smallpox, polio, rinderpest and foot-and-mouth viruses are all well-known for their disastrous effect on humans and animals. Less well known is the huge number of plant viruses that can cause total failure of staple crops.

In teaching about simple viruses, I use the flippant definition of a virus as ‘gift-wrapped nucleic acid’, whether that is DNA or RNA and whether it is double- or single-stranded. The gift-wrapping is virtually always a virus-encoded protein capsid and may or may not also include a lipid coat from the host. The viral nucleic acid is replicated and the viral proteins synthesised using the host cell’s processes. In many cases the virus also encodes some of the enzymes required for its replication, a well-known example being reverse transcriptase in RNA viruses.

Over the last 15 years or so, giant viruses found in amoebae have complicated our picture of viruses as simple non-living structures. Mimiviruses and megaviruses can contain more genes than a simple bacterium and may encode genes for information storage and processing. Genes common to the domains Archaea, Bacteria and Eukarya can be found in different giant viruses, and some researchers argue on this basis that they constitute a fourth domain of life.

However, a crucial point is that viruses are not capable of independent replication. They have to replicate within a host cell and they use or usurp the host cell machinery for this. They do not contain the full range of required metabolic processes and are dependent on their host to provide many of the requirements for their replication. To my mind there is a crucial difference between viruses and other obligate intracellular parasites, such as bacteria; namely, viruses have to utilise the host metabolic and replication machinery. Intracellular bacteria may merely use the host as the environment in which they can supplement their limited metabolic capacity and they usually have their own replication machinery. Organisms such as Chlamydia spp. have not yet been grown outside cell culture but they carry their own transcriptional and translational machinery and fall into the evolutionary kingdom of Bacteria. Like many other ‘difficult’ pathogenic bacteria, we may eventually be able to grow them in cell-free systems.

Caetano-Anollés and colleagues examined the phylogenomic relationships of viruses to living organisms through analysis of viral proteomes and assigned protein fold superfamilies. The authors concluded that viruses originated in ‘proto-virocells’ that were cellular in nature and they implied that viruses and modern bacteria evolved from common ancestors. They further claim that this means that viruses are indeed living organisms.

This is not an argument I am comfortable with. If a virus is alive, should we not also consider a DNA molecule to be alive? Plasmids can transfer as conjugative molecules, or be passively transferred, between cells, and they may carry genes obtained from the host. They are simply DNA molecules, although they may be essential for the host’s survival in certain environments. What about prions? The argument reductio ad absurdum is that any biologically produced mineral that can act as a crystallisation seed for further mineralisation (hence meeting the criterion of reproducibility) might also be classified as living!

The explicit sexism apart contained in the wording, I can do no better than to quote Dr Kenneth Smith in the Preface to his classic book Viruses (Cambridge University Press, 1962): “As to the question asked most frequently of all, ‘Are viruses living organisms?’, that must be left to the questioner himself to answer”. This questioner currently considers viruses to be non-living.

The question of whether viruses can be considered to be alive, of course, hinges on one’s definition of life. Where we draw the line between chemistry and life can seem a philosophical, or even theological argument. Most creation stories involve a deity that imbues inanimate matter with the ‘spark of life’. From a scientific perspective, attempting to find a working definition for ‘life’ seems to me to have little practical value, but it is fun to think about.

Arguments over the life/not life status of viruses are often rooted in evolutionary biology and theories of the origins of life. All cellular organisms can claim a direct lineage to a primordial cell or cells, a continuous chain of cell divisions along which the ‘spark’ has been passed. Are viruses able to claim a similar ancestry?

The contention that viruses have no place in the tree of life is often supported by the assertion that viruses do not have a comparable history – viruses are polyphyletic. Viruses are at a terrible disadvantage in this comparison, however. We are aware of only a tiny fraction of the total genetic diversity of viruses. Moreover, their genomes evolve far more rapidly than cellular organisms. So, from the small islands of sequence data we have, it is hard to argue that a coherent phylogeny does or does not exist. Interestingly, conservation of folds in viral proteins has begun to highlight possible common ancestries that could never be inferred from genome sequence data. A striking example is domain duplication of the beta jelly roll motif which gives rise to the pseudo-sixfold symmetry of trimeric hexon capsomeres in adenovirus. This is also found in viruses that infect insects, Gram-positive and Gram-negative bacteria and extremophile archaea. Viruses assemble their capsids from surprisingly few distinct protein folds, such that convergent evolution seems highly implausible.

HUMAN ADENOVIRUS TYPE 5 (LEFT – EM DATABANK 1579) AND SULFOLOBUS TURRETED ICOSAHEDRAL VIRUS 2 (RIGHT – EM DATABANK 1679) ASSEMBLE THEIR CAPSIDS FROM TRIMERIC CAPSOMERES IN WHICH EACH PROTOMER COMPRISES A DOMAIN DUPLICATION OF THE BETA JELLY ROLL FOLD. THIS ALLOWS EACH TRIMER TO PACK WITH PSEUDO-SIXFOLD SYMMETRY – THE GEOMETRIC CAGE INDICATES THE POSITIONS OF THE LOCAL SIX-FOLD SYMMETRY IN THE ICOSAHEDRAL CAPSID STRUCTURE. THIS HIGHLY CONSERVED FEATURE HAS LED TO THE PROPOSAL OF A COMMON VIRAL LINEAGE FOR THESE VIRUSES THAT INFECT EUKARYOTES AND ARCHAEA, RESPECTIVELY. 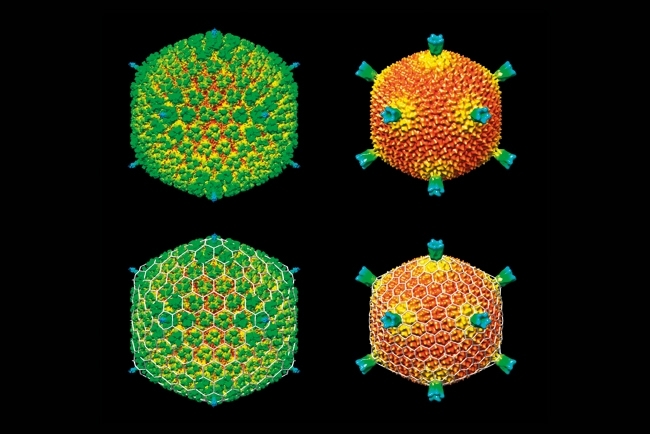 A recent study has investigated viral origins by analysis of the evolution and conservation of protein folds in the structural classification of proteins (SCOP) database. This work identified a subset of proteins that are unique to viruses. The authors conclude that viruses most likely originated from early RNA-containing cells. If viruses made an evolutionary leap away from the cellular form, casting off its weighty metabolic shackles to opt for a more streamlined existence, did they cease to be life? Have they reverted to mere chemistry?

Viruses are genetically simple organisms; the smallest viral genomes are only 2–3 kbp while the largest are ~1.2 Mbp – comparable in size to the genome of Rickettsia. They all have surprisingly complex replication (life) cycles, however; they are exquisitely adapted to deliver their genomes to the site of replication and have precisely regulated cascades of gene expression. Viruses also engineer their environment, constructing organelles within which they may safely replicate, a feature they share with other intracellular parasites.

While a virion is biologically inert and may be considered ‘dead’ in the same way that a bacterial spore or a seed is, once delivered to the appropriate environment, I believe that viruses are very much alive.

Fundamental to the argument that viruses are not alive is the suggestion that metabolism and self-sustaining replication are key definitions of life. Viruses are not able to replicate without the metabolic machinery of the cell. No organism is entirely self-supporting, however – life is absolutely interdependent. There are many examples of obligate intracellular organisms, prokaryote and eukaryote that are critically dependent on the metabolic activities of their host cells. Humans likewise depend on the metabolic activity of nitrogen-fixing bacteria and photosynthetic plants along with that of our microbiota. There are very few (if any) forms of life on Earth that could survive in a world in which all chemical requirements were present but no other life.

So, what does define life? Some have argued that the possession of ribosomes is a key ingredient. Perhaps the most satisfying definition, that explicitly excludes viruses, emerges from the ‘metabolism first’ model and concerns the presence of membrane-associated metabolic activity – a tangible ‘spark’ of life. This draws a neat distinction between viruses and obligate intracellular parasites such as Chlamydia and Rickettsia. This definition also confers the status of life on mitochondria and plastids, however. The endosymbiosis that led to mitochondria is thought to have given rise to eukaryotic life. Mitochondria have metabolic activity on which we depend, they have machinery to manufacture proteins and they have genomes. Most would accept that mitochondria are part of a life form, but they are not independent life.

I would argue that the only satisfactory definition of life therefore lies in the most critical property of genetic heredity: independent evolution. Life is the manifestation of a coherent collection of genes that are competent to replicate within the niche in which they evolve(d). Viruses fulfil this definition.

It is estimated that there are 1031 virus particles in the oceans – they vastly outnumber all other organisms on the planet. Alive or not, viruses are doing rather well!