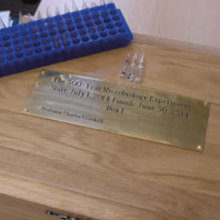 If we could fast forward to 2514 and look at samples of microbes from 2014, what changes may have taken place in those organisms – affecting their viability or their DNA? The 500-year Microbiology Experiment team are giving future generations the opportunity to find out.

Microbes have remarkable tenacity. Many vegetative microbes resistant to radiation and desiccation inhabit the world’s most extreme deserts. Bacterial spores, too, can survive desiccation for at least centuries. The ability to become dormant and ride out some of the Earth’s extreme conditions is one way in which microbes have remained dominant in all of the Earth’s habitats for well over three billion years. Indeed, the survivability of microbes in a dormant state drives concerns about whether microbes on spacecraft might even contaminate other planets (‘planetary protection’), for which there are international protocols and regulations.

However, fundamental scientific questions remain: what exactly is the rate of loss of viability of microbes when they are dormant, and what mathematical function describes their rate of death over long periods? Do some die quickly, leaving a core resistant population able to survive much longer periods? Do many survive, but then suddenly start to die after a period of time when accumulated damage to DNA and other biomolecules makes it impossible for them to be revived?

To address these scientific questions, we have set up the 500-year Microbiology Experiment that will start on 1 July 2014. It will be the longest planned scientific experiment yet created. Designed to investigate the survival of microbes and biomolecules over century time scales, it will go far beyond our existing incomplete knowledge.

We know from anecdotal reports that vegetative cyanobacteria (Nostoc sp.) cells can survive decadal time spans when desiccated. There have been many controversial reports of Bacillus endospores in amber and salt entombed for multi-million year time periods. In our own laboratory, we have observed that cells of Chroococcidiopsis sp., a cyanobacterium found growing on, in and under rocks in some of the Earth’s extreme hot and cold deserts, when dried down on agar and inadvertently left in a draw for ten years in 2003, were viable and able to resume growth immediately after ten years. These observations motivated us to set up a properly conceived, controlled experiment.

Our experiment involves storing 800 glass vials that contain either one of two micro-organisms. Endospores of Bacillus subtilis in one set of vials will test the resilience of this well-known Gram-positive organism, which forms highly environmentally resistant endospores. Another set of vials will contain dried down vegetative cells of Chroococcidiopsis sp. Every other year for the first 24 years, triplicate vials of each organism will be removed from the box and the organisms studied for viability, DNA damage and any other assay available to researchers in the future. After the initial 24 years the sampling regimen drops to once every 25 years, making the final sampling point 30 June 2514, by which time 31 time points of data will have been collected. The experiment is carried out in duplicate, one set of vials being exposed to background levels of radiation, the other being encased within lead to significantly reduce this exposure. This tests the hypothesis that background beta radiation from rock radioactive decay has a statistically significant influence on loss of viability (accepting that we cannot remove all background radiation). 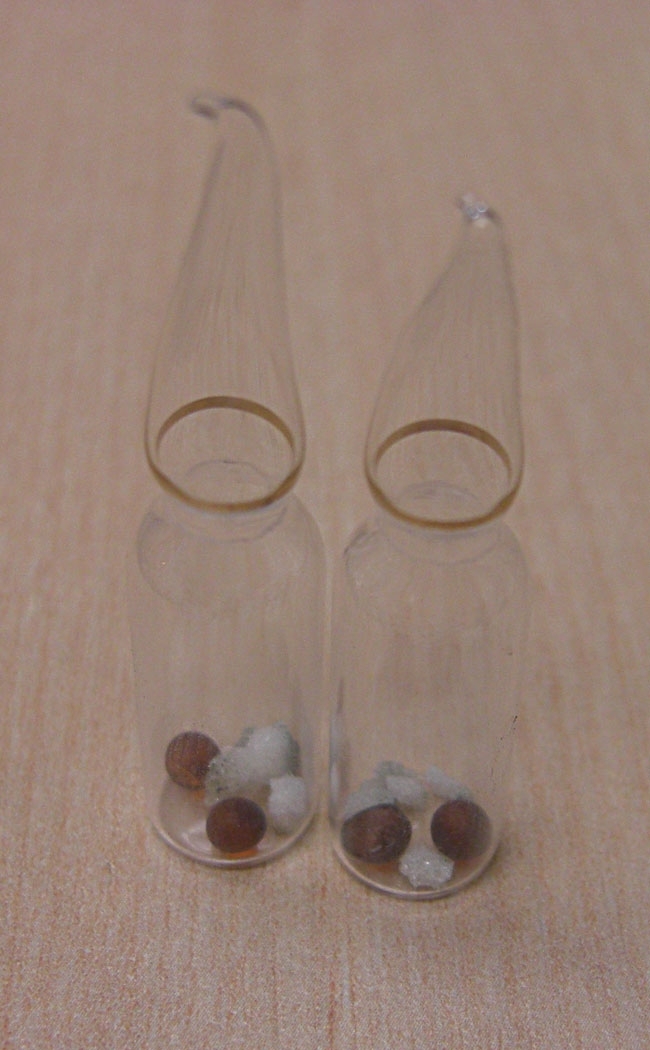 In addition to biological samples, passive radiation detectors, i.e. thermoluminescence detectors (TLDs), will be used to measure the radiation exposure including the terrestrial background (such as radon) and cosmic radiation, of the biological samples. TLD measures ionizing radiation exposure by measuring the intensity of visible light emitted from a crystal in the detector when the crystal is heated. The intensity of light emitted depends on the radiation exposure. One of the most common types of TLD is lithium fluoride. In the 500-year experiment LiF-TLDs will be applied, which have been previously used for several spaceflight experiments on board the International Space Station.

The entire experiment is repeated and contained in two separate oak boxes, to be kept in different locations. Each box contains information on the sampling interval and instructions on paper and electronically. At each 25-year time point the researchers must copy the instructions to ensure both their longevity and to prevent them from becoming out-dated with technological and linguistic development.

As well as testing the hypotheses that vegetative cells and spores can survive intact under desiccated conditions for 500 years and that loss of viability is linked to DNA damage, we will also be able to answer other fascinating questions. For example, what are the pathways and rates of degradation of the key biomolecules, DNA, lipids and proteins in desiccated cells? As analytical methods vastly improve over the next 500 years, our experiment will provide valuable samples and research project possibilities for future researchers.

For added interest, the boxes also contain images of the participating microbiology laboratories in the year 2014 and some of the thoughts and perspectives of the researchers involved in the experiment. Quite apart from its scientific value, the 500-year Microbiology Experiment also offers a wonderful focal point for education, inspiring young people to think about microbes, their role in global processes and whether such hardy forms of life might exist elsewhere. These parts of the experiment, as well as articles like this one, we hope will remind people that the experiment exists and will help ensure that the experimental time points are properly taken until the year 2514.