The lead up to the Microbiology Society’s Annual Conference 2018 was busy to say the least. As Communications Representative for the ECM Forum, I was involved in various activities. These included writing promotional material for the new committee positions and interviewing Dr Tansy Hammarton ahead of her Peter Wildy Prize Lecture. In what felt like no time, it was the Monday of Conference and I found myself pulling into Birmingham, with my poster and various notes in hand.

My first job of the week was to meet up with the Society’s Communications Team to film a venue walk around video. I felt quite self-conscious, but they were super helpful, and we eventually managed to get enough footage of me wandering around to form a short film that was emailed out to the delegates. After this, it was a quick change before the pre-conference networking event.

This year, the networking event was organised and hosted by the ECM Forum for the first time. We want to be more visible, and thought this would be a great opportunity to meet early career researchers and recruit new Forum members. The event was opened by Society President Neil Gow and ECM Forum Chair Helen Brown, who had two pieces of great advice to share; find a conference buddy so that you have a friendly face at the coffee breaks, and wear layers (the rooms are never quite the right temperature). There was then hot food and two ice breakers; networking bingo and a ‘truth or lies’ game. Once the session formally closed, we headed to a pub for some more relaxed socialising.

Conference began in earnest on the Tuesday morning with the Hot Topic lecture: ‘Plastic waste: Are biodegradable plastics the answer?’ – Possibly, it turns out, but biodegradable plastics would still need to be managed. It was interesting to see the feedback to this on Twitter, with many noting the disposable coffee cups provided at the breaks. The Society were quick to post the venue’s recycling and sustainability plans which seemed to appease the concerned parties.

What followed was four days packed full of super interesting microbiology. There was a notable increase in offered orals which, in my opinion, was great. It meant a much wider range of microbiology was covered, and it gave PhD students and postdocs valuable feedback on their research. Early career researchers including Courtney Kousser, David Williams and Joe Wanford gave really excellent talks and the feedback on Twitter for these and other ECM talks was hugely positive. 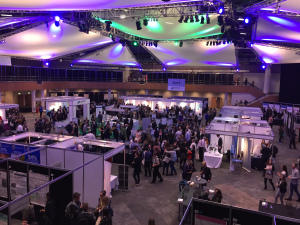 The flash poster talks were also really good. They were just a couple of slides to give you a teaser on the poster content, mostly given by ECMs and, unlike last year, were all integrated into the sessions themselves. It was an engaging and fun way to decide which posters you wanted to see later on. The poster presentations themselves were held in the evenings. I usually find these quite nerve-racking but it was a friendly atmosphere and everyone was chatty and interested in the research on display.

After presenting my poster on the Thursday evening I walked the five minutes across to the Communications Committee meeting, my last official job for the week. We had several topics to discuss, including how to make the next Annual Conference even better. There were lots of ideas floated and I can definitely say that Microbiology Society Annual Conference 2019 in Belfast is not to be missed!