At the end of August, Microbiology Society staff and members attended the Antimicrobial Resistance and One Health Focused Meeting at Maynooth University, Ireland. In our latest blog post, Policy Officer Roya Ziaie lays out some of the topics that were discussed at the event. 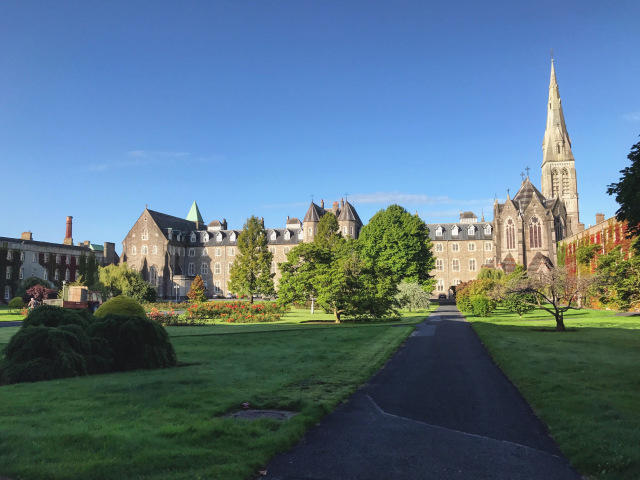 With antimicrobial resistance (AMR) becoming a major public health concern, collaboration is vital to fill gaps in knowledge between sectors. Responding to this need, the Antimicrobial Resistance and One Health meeting focused on environmental, animal, human and policy aspects of AMR in order to better understand how these sectors are independent yet interconnected.

Organised by the Society’s Irish Division, the meeting was opened by Fiona Walsh of Maynooth University. Throughout the two-day event, delegates were treated to talks and round table discussions showcasing work being done to overcome challenges in AMR, and flash poster presentations designed to facilitate international conversation.

Kicking off the first day, Finola Leonard (University College Dublin) and Nicola Williams (University of Liverpool) discussed antibiotic resistance in farm and companion animals, with Nicola highlighting concerns from the veterinary profession regarding their reliance on antimicrobials to control infectious disease. Following this, Rosemarie Slowey (Department of Agriculture, Food and the Marine, Ireland) presented significant findings from a recent report on antimicrobial surveillance of AMR in the EU, including the first time detection of resistance to carbapenem antibiotics – often the last resort option for patients with multidrug-resistant bacterial infections. You can read the full report here.

A Hidden Threat: Resistance in the Environment

Celia Manaia, from Universidade Catόlica Portuguesa, Portugal, brought to delegates’ attention the ways in which environmental wastewater can enhance the propagation of antibiotic resistant bacteria and genes. Kornelia Smalla, from the Julius Kuhn-Institut in Germany, discussed how residual antibiotics in the environment can apply selective pressure to bacteria, leading to gene transfer and, consequently, resistance. This is of particular concern where resistance has been observed passing from fertiliser in soil to human gut microbiomes through the food chain.

Human Health and the Antibiotic Problem

The event’s second day was kick-started with some insightful discussions into antibiotics and human medicine. Fidelma Fitzpatrick, from the Royal College of Surgeons in Ireland, gave a comprehensive overview of antibiotic resistance, antibiotic consumption and healthcare-associated infection rates – with 10 million deaths predicted annually as a result of AMR by 2050.

Fidelma’s colleague, Hilary Humphries, discussed the impact of carbapenemase-producing Enterobacteriaceae (CPE). CPE infections are a particular cause for concern since they often lead to bloodstream infections in hospitals and have few treatment options. Following this theme, James O’Gara from the National University of Ireland Galway spoke about improving treatment options for meticillin-resistant Staphylococcus aureus (MRSA) using different combinations of antibiotics. Annually, MRSA infections affect over 150,000 people in the EU, with treatment costs exceeding €380 million.

The closing sessions saw delegates take part in interactive, policy-based discussions, enlightening many on an entirely different perspective to antimicrobial research. Eva Reinhard from the Federal Office for Agriculture in Switzerland presented the Swiss National Strategy for Antibiotic Resistance (StAR), which closely follows a One Health approach and aims to maintain long-term efficacy of antibiotics. Delegates then split into groups to discuss how policy affects their research, highlighting the barriers, needs and successes of translating science in AMR into policy or using policy to drive research.

The question on the lips of many was how to better facilitate conversations between governments and frontline researchers, to allow for improved access to funding, better directed research and ultimately enhanced science policy to bridge the gap between strategy and implementation. Responding to this discussion, the Microbiology Society will be hosting a policy-themed workshop at our next Microbiology Society Annual Conference, taking place in Birmingham, UK – we hope to see you there!

The Microbiology Society recently produced a briefing paper on antimicrobial resistance, describing its causes and the key policy solutions needed to tackle it. This can be downloaded from our website.