Q&A with Danny Ward, winner of the Microbiology in Society Award 2019

Danny Ward is a postgraduate researcher at the John Innes Centre, researching virulence and pathogenicity of plant-infecting and human-infecting bacteria. The 2019 Microbiology in Society Award was given to Danny to create the Microbe Zone in this autumn's I'm a Scientist, Get Me Out of Here! competition; the online science engagement activity where school students connect with real scientists.

Why is public engagement important to you as a researcher?

For me personally, I find public engagement to be an important and enjoyable aspect of my job. Research isn’t fully finished until it has been communicated, it's a very necessary step in the process of scientific advancement so that society can begin to benefit from this new knowledge. Taking difficult concepts and breaking them down into something we can all digest allows new discoveries and applications to make a big impact in society.

Things like I’m a Scientist give science workers a chance to break down what they do each day and the science they work with in an accessible and interesting way and I think that's fantastic! Not only do scientists get to talk about the science they are passionate about, but they help inspire the next generation.

How will the online Microbe Zone engage the public with microbiology in society?

Microbiology is an exciting area of research which is ever-changing; scientists are finding out new things every day. Giving school students the opportunity to ask their own questions and interact with real-life scientists through the I’m a Scientist competition can make much of the scientific content much more tangible, interesting and applicable to their own lives. Students can dig beyond the headlines of what they see in the news and learn the science from the scientists behind the headlines.

Because it’s online, the competition is inclusive and brings in many young people from regions which may have been traditionally missed out when it comes to STEM outreach opportunities. The Microbe Zone will showcase potential careers that stem from the discipline to these pupils.

The Zone will feature a wide breadth of science workers which, based on previous years, could include laboratory researchers, technicians, science policy workers and public health workers. This helps to highlight the potential career options out there involving microbiology, the benefits of considering higher education, as well as the interesting science itself.

What was it like when you took part in I’m a Scientist? How does it work?

I’m a Scientist spreads science workers across a series of zones which relate to their own work. Then, school students located up and down the country join the scientists in fast-paced live chats. Here students are given the chance to ask the real-life scientists questions about their work. I found these to be a lot of fun and it was a really good way to connect in real-time with schools, many of which have been traditionally missed out when it comes to STEM outreach events due to their locations.

Following the live chats, students can send in any additional questions they may have in the ‘ASK’ section. Based on all of these questions, students then vote for their favourite scientist who they would like to see win £500 funding for future science communication and outreach efforts of their own. 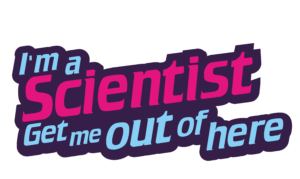 I thoroughly enjoyed my time participating in I’m a Scientist. It was an excellent chance to develop my communication skills, share my passion for research and enabled me to interact with school pupils who really were interested in my work. It was a good feeling knowing that by taking part in this competition, we could help inspire many of these individuals.

My favourite aspect of the competition were the live chats, these were a lot of fun! There were lots of questions fired to all of us scientists so it really kept us all on our toes, but it was also a brilliant way to really connect with the school classes. We could begin to build a rapport with students and often, one question led to another. You could really see the sparks of curiosity flying.

What was your favourite question?

One of my favourite questions was “Why did you become a scientist?” as I think it's an important question to ask. It was nice to see that everyone had a different reason for becoming a scientist and that we had all taken different routes. It helped highlight that there is strength in our diversity and in our different journeys while giving us a chance to stop and reflect on why we all really enjoy our jobs.

You won your Zone, what did you do with the prize money?

I donated the money to two local Norfolk based charities and worked alongside with them. These were Teacher-Scientist Network who send researchers and experiment kits out to local schools. The other is the British Science Association Norwich who run science outreach events for minority groups. This, in turn, will help grow science outreach efforts here in Norfolk, an area which has traditionally seen lower levels of scientific engagement and higher education participation in certain regions.

What advice would you give members interested in Microbe Zone?

Really get involved and immerse yourself in the experience. I found it to be a lot of fun to try to respond to as many people as I could and by doing this I was able to improve my science communication skills in the process. By the end of the competition, I felt as though I understood my own research in a new way and the context in which it fits within wider society.

By taking the time to communicate your research and questions clearly, both in the live chats and in the ‘ASK’ section following them, you can really make a difference to these school pupils' appreciation of the science and of higher education.

Also, the biggest thing: just be yourself! By showing that you are a normal person who likes normal things outside of the lab, that you too can make mistakes and that you were once in a similar position to where they are now, it makes you much more ‘real’. It’ll show students that this isn’t some super genius who is nothing like me, instead it could help to really inspire people as they could be thinking - “yeah, that could be me!”.

Find out more and apply for Microbe Zone by Monday 23 September.