Earlier this year, Professor Martin Ryan from the University of St Andrews was awarded the Microbiology Society’s Unilever Colworth Prize at our Annual Conference. In this post, Rebecca Hall gives us an overview of Martin’s talk, entitled ‘The 2A protein co-expression system: a lesson learnt from viruses to make therapeutic proteins, transgenic plants and animals, cures for cancer and pluripotent stem cells’ which you can watch below. 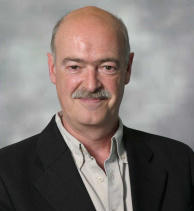 The Picornaviruses are a medically important group of viruses that are responsible for a host of serious diseases of humans and animals, including foot-and-mouth disease, hepatitis and polio.

Picornaviruses generate their proteins in quite an unusual way – their genome is only a single strand of RNA but encodes a number of different proteins for replication and capsule formation. Initially, the virus translates all of these as a single ‘polyprotein’, which is then cleaved into individual proteins.

Professor Martin Ryan from the University of St Andrews and his colleagues have unpicked the mechanism by which this polyprotein is split that they call ‘2A’. Martin and his team are now investigating whether this mechanism is unique to this group or if it can be detected in other viruses.

This year’s Unilever Colworth Prize was awarded to Martin for his work on 2A, which has opened up many exciting opportunities in the field of biotechnology. 2A has been cited in over 700 papers and has been successful in applications such as producing Golden Rice to curb vitamin A deficiency, generating pluripotent stem cells, and the treatment of cancer. In this talk Martin describes his work on the 2A system, and how the system can be used in biomedicine.