Each year, the Royal Society of Biology organises ‘Parliamentary Links Day’, an event that brings together parliamentarians and the scientific community to discuss matters of importance to both. The 2017 event was attended by several Microbiology Society staff and members, including Dr Karen Robinson from the University of Nottingham, who gave us her thoughts about the day. 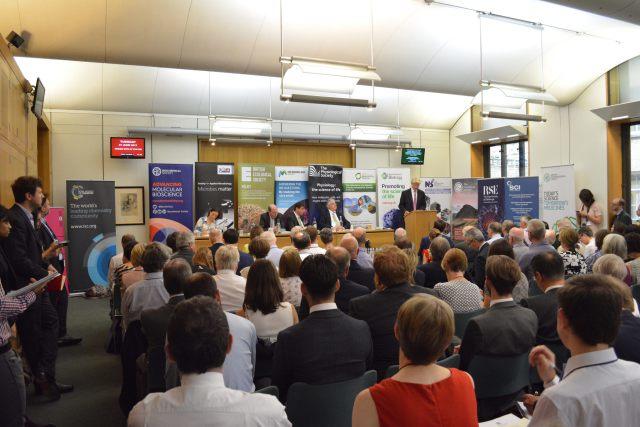 The theme of this year’s Parliamentary Links Day was ‘UK Science and Global Opportunities’ – a subject close to my heart, since I have been concerned about the impact of Brexit on PhD students and research scientists at the University of Nottingham. Many of the postdocs and research students in my building are from other EU countries and these people have expertise and skills that are in high demand. Understandably, there is concern from this group about what will happen when the UK withdraws from the EU, and I was hoping that Links Day would provide some information to ease their insecurities a little.

The Speaker of the House of Commons John Bercow MP gave the introductory address, which focused on the struggle to maintain good science education in schools, and the need for researchers to continue working with collaborators outside the UK after Brexit. These became recurring themes throughout the event, and the next speakers discussed some of the steps being taken to find solutions.

Sir John Kingman, Chair Designate of the new UK Research and Innovation (UKRI) body, discussed its role in securing opportunities to advance UK science after Brexit. Jo Johnson MP, Minister for Universities, Science, Research and Innovation, announced that the science budget is to be increased from £6 billion to reach £8 billion in four years, which was well received by the audience.

As the programme moved on to a panel discussion about Science and Europe, there were some pretty alarming statistics for us to digest. Professor Roberto di Laura from the Embassy of Italy explained that 82% of Italian academics working in the UK are considering leaving, according to a recent survey. Dr Lorenzo Melchor from the Embassy of Spain echoed this, revealing that more than 30% of Spanish academics are now planning to return to Spain. 73% of Spanish academics have been in the UK for fewer than 5 years, and would not qualify for “settled” residency status in the UK.

Professor Charles Dorman, a member of the Microbiology Society’s Council, is based in Ireland. He asked the panel if they had any data on the future plans of UK scientists based in other EU countries, since many are now applying for Irish nationality or relocating back to the UK. They did not have this information, but agreed that special provision for these scientists post-Brexit would be a good idea. Similarly, Chi Onwurah MP, the Shadow Minister for Innovation and Science, was keen for special considerations to be made for EU citizens working in science and innovation, enabling them to remain in the UK.

‘Science and the World’ was the theme of the second panel discussion, and this predominantly focused on the preservation and improvement of existing working partnerships outside the UK, and how the sector could avoid a future lack of skilled scientists. Dame Jocelyn Bell Burnell from the Royal Society of Edinburgh emphasised that, if we are to avoid damage from Brexit, a loud announcement and a “charm offensive” is needed to show the world that the UK is open for business with external partners. She recommended that learned societies should play a role in this, as they have the power to influence politicians and society.

Professor Paul Kellam, another Microbiology Society Council member, pointed out that UK research leads on issues of global importance, such as antimicrobial resistance and Ebola outbreaks. He asked the panel how the UK can avoid becoming isolated, maintain its excellent research position and maximise influence in other countries after Brexit. He was advised that universities and charities should ensure that government is involved in maintaining strong international links.

Afterwards, during a House of Lords luncheon, Society members had the opportunity to speak with Sir Peter Bottomley MP, BBC Science Correspondent Pallab Ghosh, and Dr Elizabeth Rough from the House of Commons Science and Technology Committee. Many interesting points were made during the event, and it was great to have opportunities to liaise with parliamentarians and others from across the scientific community. It was good to hear about increased funding, but personally I was disappointed not to have something more concrete about how the UK can retain or attract EU or international scientists and students. We were advised that the scientific community needs to reassure and charm people, but this will not achieve results without having strongly supportive official announcements. It was really encouraging to see agreement on the big issues between all the learned societies present – it shows that we have a cohesive voice that can be used to highlight issues that affect us all.

Karen is a member of the Microbiology Society’s Council, and Chair of our Scientific Conferences Committee