This year, after several years of attempting to get an invite, I was absolutely delighted to be able to attend Parliamentary Links Day as a member of the Microbiology Society Policy Committee. I attended alongside Dr James Kelly, Dr Justine Rudkin, Dr Yinka Somorin and Microbiology Society Policy Manager Jack Doughty. Organised by the Royal Society of Biology, Parliamentary Links Day is one of the biggest science events in the Parliamentary calendar, linking members of Parliament to scientific researchers. The theme of 2019 was ‘Science and New Frontiers’. 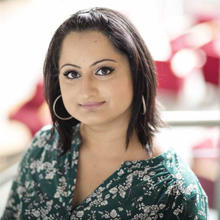 I arrived at Portcullis House on the morning of Links Day to find a queue of scientific researchers and learned society members waiting with an air of excitement and anticipation. Upon entry to the (very warm) Attlee Suite it was clear the event was packed out with some even standing.

As this was my first event, I had no idea what to expect, except that we were due to hear from some key members of Parliament. The itinerary did not disappoint, with several keynote speeches and panel discussions delivered by parliamentarians, policymakers and key leaders within the research sector. Dr Stephen Benn, Director of Parliamentary Affairs for the Royal Society of Biology, opened the event and introduced a lively and energetic Rt Hon John Bercow MP, Speaker of the House of Commons. Mr Speaker warmly welcomed the attendees and, with some serious oratory skill, highlighted the importance of encouraging links between STEM, the public and Parliament and I was pleased to see he spoke of maintaining collaborations with scientists in the EU post-Brexit.

Next, Chi Onwurah MP, Shadow Minister for Industrial Strategy and Chartered Engineer, gave an impassioned keynote speech about how important it was to invest in science and technology for society to progress and develop. Moreover, she stated that she believed in science for science’s sake. She also discussed her experiences of diversity issues in STEM, acknowledging that issues exist and joking that Parliament was the “most diverse” place she had worked at. She focused on the importance of evidence-based policy-making and stressed that the rational and logical people attending the Parliamentary Links Day event were a key strength of the UK. At this point many attendees nodded in agreement.

The first panel session focused on ‘New Frontiers’ and was chaired by Stephen Metcalfe; MP of the House of Commons Science and Technology Select Committee. This showcased success stories in UK science innovation described by panel members from the learned societies who introduced themselves and answered questions from the floor. I was particularly enthused when listening to the introduction from panel member Professor Sanjeev Gupta, from the Geological Society. Professor Gupta discussed research with the Mars Rover and even had some cool 3D printed props to show attendees.

The second keynote speech was given by Rt Hon Sir Norman Lamb MP, Chair of the House of Commons Select Committee on Science & Technology, who echoed Chi Onwurah’s comments of the importance of scientists being involved in policy and rational decision-making which was reassuring. Further, he also encouraged scientists in the audience to invite Committee members to their universities/research institutes to learn more about new innovations and research, which is something I am pursuing with my own place of work. It is important to ensure key leaders of the select committee know what new research is being done and how science is progressing in the UK.

The final panel session was chaired by Carol Monaghan MP, member of the House of Commons Science and Technology Committee and focused on ‘Policies for Success’. This session was particularly interesting as the panel were asked about key policies which would retain talent in the UK and Dr Sarah Main (Campaign for Science and Engineering) offered suggestions of investing in science and infrastructure.

The most interesting talk of the event was left to the end; this was by Chris Skidmore MP, Minister of State for Universities, who came across as genuine and having the best intentions for the UK scientific community. Rather than give a long-winded speech, Chris briefly discussed the importance of maintaining EU collaboration and participation of UK institutions in Horizon 2020 post-Brexit and how the Government were going to adhere to their stated target of increasing research and development (R&D) investment to 2.4% GDP by 2027. He also stated that 2019 was a difficult year for science due to Brexit. After this, he directly engaged with the range of scientists in the room and opened the floor to questions; an opportunity which was welcomed. His interactions with the audience were meaningful, answering questions about the Comprehensive Spending Review and its impact on reaching the 2.4% GDP target for R&D as well as how to encourage more interest in learning STEM subjects. Interestingly, after discussions at Links Day, Chris Skidmore MP recently announced that university-led research would receive an extra £91 million (in addition to £45 million for quality-related research), which equates to a 2.3% rise – which is a positive step in the right direction.

Links Day is an important event in the Parliamentary Calendar and it was great to see successes in UK science and innovation. While I enjoyed the day, I had hoped that we, as attendees, would have had more of a chance to directly and easily pose questions to MPs and policy-makers who were present at Links Day, rather than being an audience to discussions on familiar topics. However, the direct approach of Chris Skidmore MP, who took time to talk to the scientists in the room who chose to ask a question, was refreshing and completely on point – especially as promoting dialogue between parliamentarians and scientists is the main aim of Parliamentary Links Day.