This year, there were over 600 Pint of Science events across the UK. Pint of Science is a worldwide science festival which brings researchers to your local pub/cafe to present their scientific discoveries. We caught up with Rebecca Hall, who took part in York's Ecology and Evolution session earlier this month.

I LOVE Pint of Science. I think it is a great opportunity to learn some really cool new things, and every year I try to go to something out of my comfort zone. So when I was asked to give a talk in York’s Ecology & Evolution session this year, I jumped at the chance.

The organisers were super helpful in the build-up, emailing through regular updates and information to make sure I was as prepared as I could be. I was asked to prepare a 20 (ish)-minute talk, accessible to a lay audience. My PhD research looks at the metabolism of symbiotic bacteria through metabolic modelling and microbiology. After some ponderings, I decided to talk about symbiosis from the origins of complex life, through to how scientists are harnessing symbionts to control tropical diseases. I felt this was a concept that would be interesting to a general audience, whilst still giving me the opportunity to talk about the area of biology that most excites me.

Our event was held at the adorably quaint and very ‘York’ (think wooden beams, steep stairs and creaky floors) Walmgate Ale House. The speakers were asked to arrive half an hour before the start, which gave us ample time to check our slides and figure out logistics. 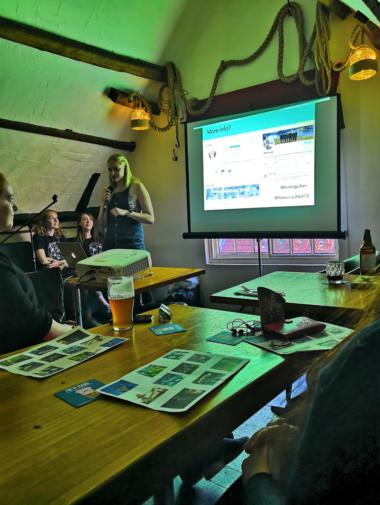 I was first up, and although I love presenting I actually felt really quite nervous. It was a completely different setting to what I’m used to presenting in. Where possible, I used slides with brightly coloured images, kept text to a minimum and avoided graphs completely. I steered clear of all scientific jargon (well, tried to!), and described terms fully if I did use them. I also tried to use imaginative ways to describe complex ideas where I could. Overall, it seemed to go down well, with some really thought-provoking questions from the audience at the end. I also had a few props with me, including some agar plates containing fingerprints from the lab group and two of my favourite popular science books; Power, Sex, Suicide by Nick Lane, and Ed Yong’s I Contain Multitudes. A big thanks to the Microbiology Society’s Matt Bassett for allowing me to use his fantastic ‘Gut Microbiome’ video.

After the break came a talk from Biology PhD student Eleanor Drinkwater. Eleanor spoke about a recent trip to French Guiana where she teamed up with an entomologist and a filmmaker to hunt for the huge (size of your hand) titan beetle. Her talk was funny and engaging, with videos that really captured the difficulties involved in studying these elusive creatures.

Finally, Jon Pitchford from the Maths and Biology departments spoke about how you could use maths to understand all sorts of biological complexity. His slightly political talk was amusing and current, and it seemed to be very popular with the audience.

If you get a chance to speak at a Pint of Science event in the future, go for it! I found it a little daunting at first but the need to condense my subject area down into the simplest and most interesting points was a really helpful exercise for thinking about my thesis. And it was super fun!