Pint of Science Salisbury 2019 – preparing and responding to emerging diseases

Professor Miles Carroll (Deputy Director and Head of Research at Public Health England [PHE]) was invited to give a talk about emerging diseases at the first Pint of Science Festival in Salisbury. Pint of Science is a non-profit organisation which brings scientists to pubs and cafés to share their latest research with the public in an informal setting. Dr Stéphanie Longet takes us through Professor Carroll’s talk.

Although viruses can be 100 times smaller than bacteria, they can be extremely virulent. For example, in the 1900s, smallpox is estimated to have caused 300–500 million deaths and, in 1918, ‘Spanish flu’ led to 50 million deaths. While these diseases are no longer a concern, they have been replaced by other deadly diseases; tuberculosis, malaria, and enteric diseases to name just a few.

There are several strategies to stop infections. Firstly, avoidance; a famous example was the Broad Street cholera outbreak in 1854 in the Soho district of the City of Westminster, London. The physician John Snow hypothesised that the cholera outbreak might be due to contaminated water and identified the source of the outbreak as the public water pump on Broad Street. Consequently, the pump was disabled by removing its handle. Secondly, protection; Edward Jenner was the pioneer of the smallpox vaccine. He discovered the link between cowpox infection and smallpox in humans. Several previous observations had showed that milkmaids were protected from smallpox during epidemics. Jenner postulated that the milkmaids received cowpox from the pus in the blisters of infected cows, which protected them from smallpox. He tested his hypothesis by inoculating an eight-year-old boy with pus from cowpox blisters. Following inoculation, the boy did not develop smallpox when presented with the disease. 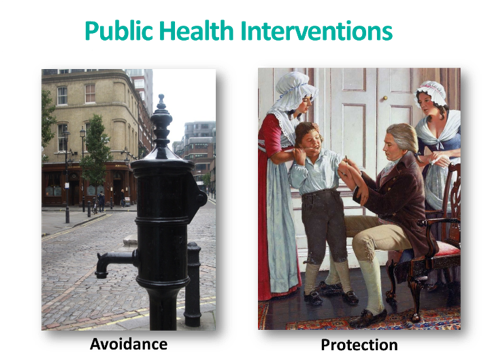 Nowadays, there are important collaborations between industry and research centres to develop specific and very efficient vaccines. There are vaccines against a range of infectious diseases including whooping cough, influenza and meningitis. However, there are still many emerging diseases, particularly viral diseases, without any treatments or vaccines which cover all continents

How do viruses emerge?

Viruses can emerge due to their ability to mutate and spread very quickly. Viruses with RNA have a much higher mutation rate compared to DNA viruses, causing new strains to develop. If these new strains can spread quickly, they can easily emerge to cause epidemics. Out of all the most devastating infectious diseases in human history, 80% have been zoonotic, i.e. spread to humans from animals. A direct zoonotic transmission can happen when humans prepare or eat contaminated animals. This swift and easy transfer coupled with an ability to mutate into new and more virulent strains can allow emerging viruses to very quickly become established and cause epidemics.

Ebola virus disease is a serious illness that originated in Africa. The original host is thought to be bats. Bats can transmit the virus to other animals like apes, monkeys and antelopes, as well as humans. When humans hunt or prepare infected meat for eating, the virus can be transmitted. Once the Ebola virus has infected the first human, the transmission of the virus to another human can occur through contact with the blood and bodily fluids of sick people or with the bodies of those who have died of Ebola.

One of the largest Ebola epidemics was the West African epidemic from 2013–2016. The first case, of an 18-month-old boy in Guinea, was reported in December 2013. In March 2014, the Global Outbreak Alert and Response Network was activated, and the European Mobile Laboratory was deployed. Between October 2014 and August 2016, 402 scientists were trained at PHE’s training lab. There were three fields, two hospitals and one mobile laboratory in Sierra Leone. Trained staff tested 52,034 patient samples for Ebola virus in Sierra Leone and more than 60 scientists from PHE served in West Africa. 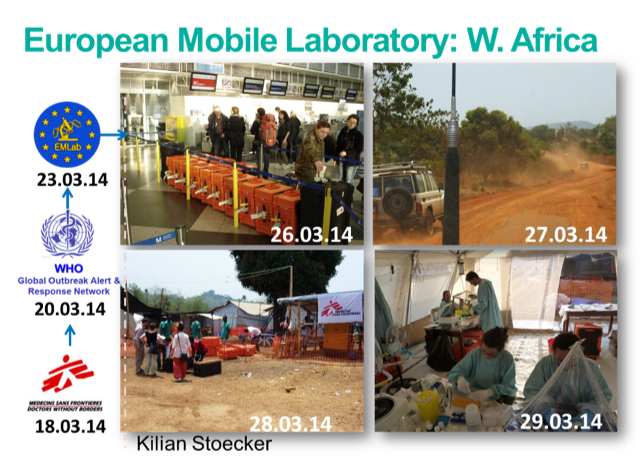 Transcriptomics studies allowed scientists to understand the transmission of the virus, particularly the sexual transmission from survivors, even several months after the disease. These data led to the decision to start mass vaccination of people who had been in contact with male survivors with an experimental vaccine.

Finally, the current studies are aimed at understanding immune responses of survivors and contacts who did not develop the disease. This will improve current knowledge about naturally-acquired immunity and silent Ebola virus infections.

As the economic cost of outbreaks is huge, the World Health Organization set up a plan of action in May 2016 to prevent epidemics caused by emerging viral diseases. Billions of dollars of funding have been invested for emerging disease vaccines research and development. Whilst the development of new vaccines is of vital importance, it is also essential to ensure public confidence in vaccines.