Sepsis is a major health problem in the world. According to Pasteur Institute, someone dies of sepsis every five seconds worldwide. On Friday 25 June 2021, the town of Abomey-Calavi and the University of Abomey-Calavi in the Republic of Benin hosted the celebration of World Sepsis Day. This organisation is attributed to a consortium consisting of PSR Finland, the Research Unit in Applied Microbiology and Pharmacology of Natural Substances, the Benin Young Academy Sciences and CeRADIS NGO with the institutional and technical support of the Ministry of Health of Benin, the American Society for Microbiology and the Microbiology Society.

Celebrate World Sepsis Day: an opportunity to bring together the different actors involved in the diagnosis and management of sepsis

World Sepsis Day is an initiative by the Global Sepsis Alliance and was established in 2012. World Sepsis Day is usually celebrated on 13 September, but this day usually receives little attention from health professionals and socio-political actors in Benin and West Africa. In order to optimise communication and sensitisation on the dual problem of sepsis and antimicrobial resistance, PSR-Finland, CeRADIS-NGO, the Research Unit in Applied Microbiology and Pharmacology of Natural Substances (URMAPha), the Benin Young Academy of Sciences, Microbiology Society and American Society for Microbiology proposed to celebrate World Sepsis Day through sensitisation and popularisation activities in Benin. This celebration took place in the commune of Abomey-Calavi (located in the south of Benin) and was also attended by the Ministry of Health, the Town Hall of the Commune of Abomey-Calavi and the National Police. This initiative was aimed to improve the level of knowledge of health professionals, student biologists and other actors on Sepsis in Benin, improve the medical management of sepsis in Benin and contribute to the adoption of preventive measures to fight against sepsis in Benin.

A multi-stage celebration with over 300 participants

The date 25 June 2021 was chosen by the consortium to celebrate World Sepsis Day. A week before this day, a digital campaign was launched to raise awareness of sepsis and the issues related to its management.

After the opening ceremony, two scientific communications were presented. The first communication was titled, 'Conceptual clarifications of sepsis and applications'. It was presented by Dr Dossou-yovo Gatien, who is an infectious disease specialist. During this communication, he highlighted the different definitions of septic states, the physiopathology, the diagnosis, the management and the different issues related to the fight against sepsis in Benin. The second communication was titled, 'Sepsis, hygiene and antimicrobial resistance'. It was animated by Microbiologist, Dr Hornel Koudokpon. The communicator insisted on antimicrobial resistance, as a handicap of effective management of sepsis.

A caravan against sepsis

After the communications, 300 caravaneers, supervised by the republican police, left the Idriss Deby amphitheater, heading for the Abomey-Calavi Cooperative Polyclinic, located about an hour's walk from the University of Abomey-Calavi. In front, on a large banner, the slogan "Actors of health, let's mobilize against sepsis".

The caravan arrived at Polyclinique Cooperative d’Abomey-Calavi where the health professionals were sensitised on Sepsis, with the help of various posters of sensitisation.

The caravan resumed its journey towards the town hall of Abomey-Calavi, located 5 minutes’ walk from the Polyclinic Cooperative of Abomey-Calavi. On this site, it was officially handed over to the Mayor and the entire communal council, the torch of the fight against sepsis. 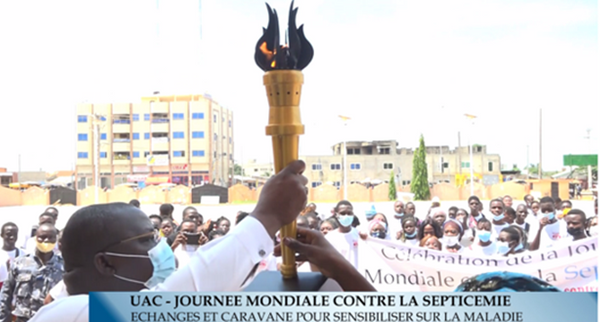 The celebration of World Sepsis Day was a groundbreaking event. It is particularly noteworthy for the nature of the activities carried out (especially the caravan and the passing of the torch), the inclusiveness (for having associated health professionals, scientists, academics and political actors) and the impact. Indeed, according to Dr Victorien Tamègnon Dougnon, Champion of the Microbiology Society, Country Ambassador of the American Society for Microbiology, President of the Benin Young Academy of Science, National Coordinator of the "Quality laboratory testing -training project in Benin 2021—2022", this celebration made it possible to impact around 10,000 people (both online and physically).