This device uses a laser to rapidly detect bacteria

SLIC by name, slick by nature. That’s the title of a presentation later today by Dr Robert Hammond from the University of St Andrews. In it, he’ll be talking about a new technology for quickly detecting bacteria and their susceptibility to antibiotics.

SLIC can detect between 10 and 100 bacterial cells in 1ml of liquid – that’s equivalent to finding 10 Maltesers hidden around Wembley Stadium.

It works by shining a laser beam inside an orange-sized sphere, which contains the sample in a small well. Most of the light – around 99% – escapes out the other side. But the other ~1% doesn’t make it, hitting bacteria inside the liquid and getting scattered around the inside of the sphere.

“Imagine a single photon that interacts with a bacterium. That diverts it from its perfectly linear course, and it starts to fly off in any random direction,” explains Robert. 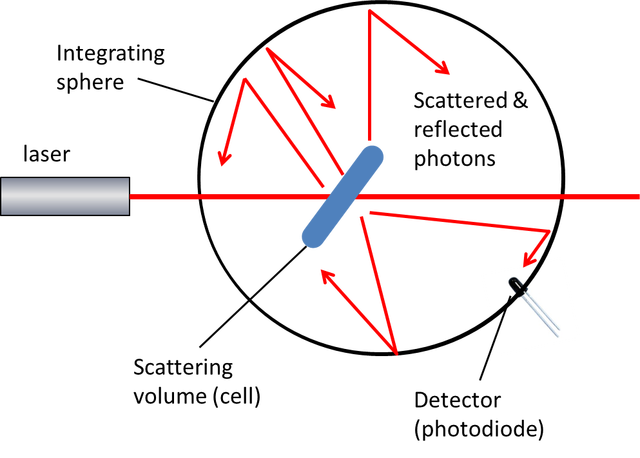 The amount of light detected in this way is proportional to how many bacteria are present.

By taking multiple readings, SLIC can also tell you whether bacteria are growing under certain conditions – for example, in the presence of antibiotics, which could be incredibly useful for working out how to treat infections.

The next step for Robert and his colleagues is to test versions of the device in labs around Scotland and England. The team has also been awarded a Discovery Award from the Longitude Prize, to help develop their technology into a device that could be used directly in the clinic.

“We’re working towards a point-of-care SLIC device that could take a sample directly from a human being – sputum, blood, urine, spinal fluid… It would then extract the bacteria […] and apply SLIC technology directly to that,” says Robert.

“Hopefully we could put that into GP surgeries. A patient could come in, and in an hour’s time, the machine could tell you if there are bacteria present in a sample, and whether they are susceptible to a certain antibiotic. Or importantly, it could tell you that there is no infection there, so the patient isn’t given antibiotics unnecessarily.”