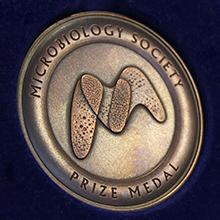 The recipient of the Prize Medal will receive £1,000 and be expected to give a lecture based on the work for which the award has been made to a meeting of the Society. The recipient will be encouraged to publish the lecture in one of the Society’s journals, whichever is the most suitable. This decision will be at the discretion of the Editors of the journals.

Nominations for the 2024 Prize Medal are now closed.

The following playlist includes some of the lectures from our previous Prize Medal winners.

Nominations for the 2024 Prize are now closed.   Details of the nomination process, award criteria and administration can be found below.

We welcome nominations of individuals who are global leaders in their field and have made a far-reaching impact beyond the field of microbiology.

The deadline for 2024 nominations has now passed. If you require inspiration for your nomination, please see the example nomination forms available on the Prize Lectures page.

The Prize Medal recognises the highest-class researchers who had made an impact in microbiology and beyond.

For questions about the Prize Medal, please contact [email protected].