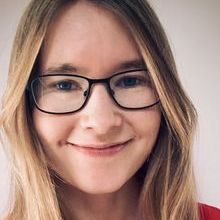 Emma Banks, from the University of Nottingham, is the winner of this year’s Sir Howard Dalton Young Microbiologist of the Year competition.

Emma is currently studying for a PhD and was awarded the prize for her talk ‘Creating curvature to kill: an enzyme that shapes predatory Bdellovibrio bacteria, optimising invasion and replication within prey’.

Emma said; “It was such an honour to be nominated as a finalist for the Sir Howard Dalton Young Microbiologist of the Year Competition and the standard of talks by the other finalists was so high that I was amazed to have won! Thank you so much to the Microbiology Society for organising such a brilliant Annual Conference and Society Showcase, especially during these bizarre and difficult times.

I’m so lucky to work on Bdellovibrio bacteria, which are constantly fascinating and full of surprises. It’s a joy to watch them swimming around under the microscope every day!

Science is always a collaborative effort and I have many, many people to thank for their help and support during my PhD – first and foremost my supervisor Liz Sockett, whose brilliant ideas and support have been invaluable. I also want to thank everyone in our lab at Nottingham and our collaborating labs - especially Andy Lovering’s lab in Birmingham.

Thank you again for this award and I can’t wait to explore further exciting microbiology projects with new collaborations in the future!”

The second prize was awarded to Danielle Nader from the Royal College of Surgeons in Ireland, for her talk on ‘Targeting the evolutionary RGD motif in the spike protein of SARS-CoV-2 serves as a novel treatment option to prevent vascular damage during COVID-19’.

Third prize was awarded to Mary Turley from Trinity College Dublin, Ireland, for her talk on ‘Polysaccharide-Dependent Biofilm Formation is induced by Bile in Cystic Fibrosis Isolates of Staphylococcus aureus'.

The Society congratulates all of the finalists, and thanks everyone who took part in the competition.

Sir Howard Dalton was a past President of the Society and the competition is named in his honour to recognise his service to science and support of early career researchers. The Young Microbiologist of the Year competition recognises and rewards excellence in science communication by a Society member who is a postgraduate student, or postdoctoral researcher having gained their PhD in the last two years.