Fungal bioremediation of a pervasive pollutant 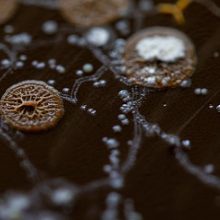 Fungi could be used to break down organic pollutants generated by plastic waste in the environment, research has found.

Researchers have been investigating the potential of using certain types of fungus to remove harmful plastic pollution from water and soil.

Phthalate esters (PEs) are a common type of pollutant seen everywhere in the environment. These chemicals are used in a wide range of products including cosmetics, packaging, plastics and paint. The increasing prevalence of PEs in the environment is troubling, as they have a number of harmful effects on both humans and wildlife.

PEs are xenoestrogens, meaning they behave like the hormone oestrogen. If consumed, this can lead to hormonal disruption with a number of knock-on health effects including reduction in sperm counts and an increased risk of developing breast cancer. “Over the last decade, an increasing number of studies have highlighted the implications of PEs on reproductive health as they are known to act as endocrine disrupting chemicals. This presents problems for wildlife and potentially human health” said Andrew Cowan, PhD candidate at Solent University, Southampton.

Due to these negative health effects, it is important to find ways to remove PEs from the environment, particularly from water and food supplies. Research Cowan was involved in at the Helmholtz Centre For Environmental Research in Leipzig has been looked at ways to remove PEs from the environment. Currently, exposure to PEs is unavoidable due to their extensive presence: “Phthalates, like many other persistent organic pollutants, are ubiquitous in nature and human consumption/exposure is unavoidable. Preventative measures are in place to limit exposure of phthalates through food and water consumption – although studies have shown high levels of these compounds in specific food groups, especially fatty foods” said Cowan.

His research involved assessing how certain groups of fungi – in particular, ascomycetes and basidiomycetes – from a range of environments break down PEs. The research looked at species of fungi typically found in freshwater systems, saltwater or on land and observed how strains from these different environments may break down PEs. Through a number of experiments, the group was able to understand how fungi with different characteristics were able to break down PEs; and the by-products that were made as a result.

The potential of micro-organisms to remove pollutants is well known, but usually research in this area focuses on bacteria, according to Cowan. He said: “Biodegradation studies tend to involve bacterial species due to the ease of modelling them in the lab, and like fungi, they represent a diverse group of microorganisms that show potential when it comes to biodegradation of pollutants. Fungi are often overlooked in many aspects; however certain characteristics make them well suited for bioremediation. For example, they can exhibit no reliance on the pollutant and often degrade the substrate in a co-metabolic manner.”

“Although the use of phthalates in Europe has now been limited to certain specialised products their persistence in the environment warrants concern – they undergo very slow photodegradation, and hence remain for a long time” he continued.

According to Cowan, PEs are present in a number of products used on a daily basis: “They are used as binding agents in cosmetics (e.g. shampoo, nail polish, perfume, etc.), paints, lubricants, and insecticides (e.g. insect repellent). PEs are also widely added to polyvinyl chloride (PVC) as plasticisers in order to improve flexibility and soften the polymer. Therefore, these compounds are also present in a multitude of ‘flexible’ PVC products – i.e.  vinyl flooring, food packaging and intravenous tubing – to name a few.”

Andrew Cowan will present his research as part of the Environmental and Applied Microbiology Forum at the Microbiology Society’s Annual Conference in Edinburgh this year. His poster, titled ‘Biotransformation of organic micropollutants di-n-butyl phthalate (DBP) and diethyl phthalate (DEP) by fungi of different ecophysiological groups’ will be available to view on Thursday 2 April and Friday 3 April, with presentations taking place on Thursday evening between 18:30 and 20:00.