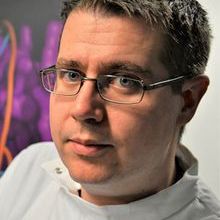 Arwyn Edwards, Reader in Bioscience at Aberystwyth University, has been involved in Microbiology Society activities since his undergraduate summer project which was funded by the Society. Arwyn chose to donate to the Unlocking Potential Fund to help ensure we have the broadest range of talent working on microbes.

“Normally I could expect to spend a fair amount at Annual Conference and last year I didn't have that opportunity. It seemed sensible to redirect that!”

Arwyn Edwards shares that the Microbiology Society has supported him at each stage of his career. “I'm the first in my family to study after the age of 16. A career in research would have been beyond my imagination were it not for an undergraduate summer project funded by the Society,” Arwyn Edwards explains. Following his PhD, he received his first Principal Investigator grant from the President’s travel fund, which led to him securing future contacts and funding that supported UKRI New Investigator funding a year later.

As well as funding, Arwyn mentions how the Society supported him by promoting his research early on in his career, “I had the chance to attend a major conference – the Society's Annual Conference. I left the conference having not just presented my work, but the Society's media team had managed to promote it to media platforms all over the world.”

When reflecting back on when he was establishing himself as a lecturer, Arwyn reflects on the difficulty of balancing an independent dual career whilst also facing personal challenges. “Six months in, I suddenly became responsible for the long-term care of an elderly parent. A year later, I experienced a traumatic brain injury. Snatching time away for fieldwork in the polar regions essential for research work was often a case of having to manage eldercare cover over satellite phones in the field, and so on. Quite a fraught time in retrospect.”

Over the past few decades, Arwyn has worked with a diverse range of early career researchers, which he has described as a great privilege due to the inspirational contributions they are making towards understanding climate change, antimicrobial resistance and COVID-19.

“It's clear to me there are gaps in our research ecosystem which disproportionately affect early career researchers. This has been exacerbated by the pandemic. We need to make sure we have their backs covered.”

“The challenges of establishing a career in science change over time. Advice from more senior career stages can offer wisdom but also needs to ensure its relevance.” Arwyn advises early career researchers to: “Firstly, seek opportunities for they multiply as they are found. Secondly, find your limits: work to them but not beyond. Finally, make time to build lasting collaborations founded on respect and good intellectual exchange.”

“The Society is one of the best means of introducing, supporting and promoting microbiology and microbiologists. It does so in so many ways: what's not to love?”

By donating to the Unlocking Potential Fund, you can help support the people who might, in turn, one day provide solutions to global challenges. Help them reach their full career potential.