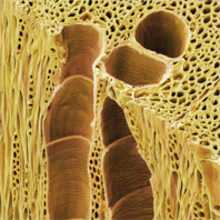 We were aware of the disease because of our involvement in helping manage Ashwellthorpe Lower Wood, an ancient coppiced woodland in South Norfolk. This woodland, owned by the Norfolk Wildlife Trust, is a Site of Special Scientific Interest (SSSI) and its name, Ashwellthorpe, comes from the Vikings, for whom the ash (Fraxinus excelsior) was sacred. It was devastating to see young coppiced regrowth showing early signs of what looked like ash dieback. Since this occurred just a few miles from where we work at the John Innes Centre (which specialises in plant and microbial research), we asked ourselves and our colleagues what we could do to help an iconic native tree.

WE REVISIT THE WOODLAND WHERE ANNE FIRST FOUND ASH DIEBACK IN 2012, TO SEE HOW SOME TREES SEEM TO BE TOLERANT TO C. FRAXINEA, AND LEARN WHAT'S BEING DONE IN THE FIGHT AGAINST THE FUNGAL PATHOGEN.

A new pathogen in Europe

What was already known about the disease-causing fungus? Scientists from across Europe had established that Chalara fraxinea is the vegetative (anamorphic) form of the fungus, which kills trees by invading stems and trunks and blocking the vasculature. The fungus also has a sexual form, which was originally named Hymenoscyphus pseudoalbidus, because it looked similar to, and has the same host as, Hymenoscyphus albidus, which grows widely (but non-pathogenically) on ash trees across Europe. Due to its distinctive characteristics, the pathogen was renamed Hymenoscyphus fraxineus, and we now know that where the disease is present, H. fraxineus is completely displacing H. albidus. Both species live in ash leaf litter and spread by releasing sexual (haploid) spores into the air and infecting surrounding trees. Spores fired upwards from fruiting bodies land on ash leaves, germinate and penetrate as the vegetative form into the petiole and main leaf stem (rachis). When the rachis falls, it takes the fungi with it and sometime during the winter and following spring, the fungi enter the sexual phase of the lifecycle. Pre-fruiting structures start to appear, some of which develop into tiny white cup-shaped mushrooms (ascocarps) less than 0.5 cm wide. There can be 20 of these mushrooms on a single petiole and when they mature in summer, they release highly infective ascospores (around 1,500 per hour every morning in summer months) and the whole cycle starts again.

Normally, trees rid themselves of the saprophyte H. albidus in autumn with leaf fall. However, H. fraxineus grows faster and more aggressively on ash trees and so, rather than being contained within the leaves and leaf stems, H. fraxineus can grow into the woody parts of the tree. There it continues to grow slowly over winter and then in spring probably grows rapidly as the tree starts to initiate new leaf growth. This rapid fungal growth in the phloem and xylem of branches can then strangle the growth of the distal young leaves, causing the characteristic ‘dieback’ symptoms.

Had the harmless native saprophyte turned into a killer or was the destructive H. fraxineus itself a saprophyte which had found itself in a foreign environment without its natural host? The latter theory gained popularity when it was found that Asian ash species such as Fraxinus mandschurica were unaffected by ash dieback. Genome sequencing has revealed that H. fraxineus has a considerably larger genome (60 megabases) than the saprophyte H. albidus (40 megabases) and so these are two related but rather different species. It is probable that H. fraxineus was introduced into Eastern Europe, possibly due to movement of trees or leaves from somewhere in East Asia, where F. mandschurica is adapted to growth with H. fraxineus. 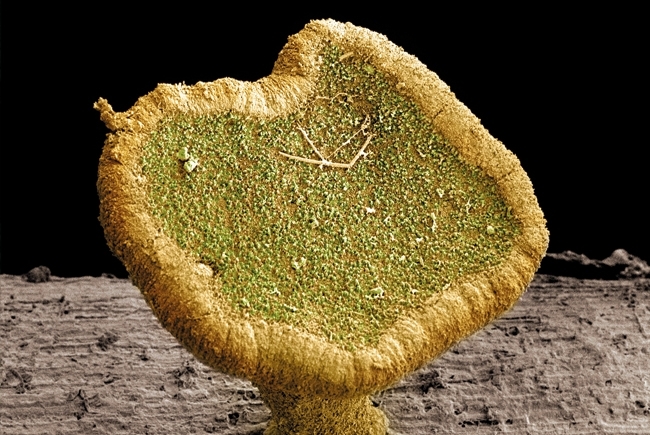 F. excelsior can respond in different ways when challenged by H. fraxineus. Many trees appear to be exceptionally sensitive, dying within a few years of infection; a few others (about 5% in Denmark) seem to be much more tolerant to the disease. In between these two extremes, there is a range of responses. Danish scientists had grown several clones of grafted trees in many different environments and fortuitously a couple of these showed some tolerance (one high and one intermediate) to the disease. Since this tolerance was consistently observed in various locations and in different environments, it could be concluded that the tolerance was genetically determined.

With funding from the BBSRC and Defra, a research consortium called Nornex was set up including groups from the John Innes Centre, The Sainsbury Laboratory and The Genome Analysis Centre (all in Norwich), the Universities of Exeter, Edinburgh and York, FERA, Forest Research, the University of Copenhagen, and the Norwegian Forest and Landscape Institute. The aims were to (a) use genomics-based tools to establish a foundation of knowledge on the pathogen, (b) establish laboratory-based tests of pathogenicity and assays of growth and survival of the pathogen, and (c) use genomics and transcriptome-based approaches in ash trees to try to map tolerance (resistance) to the disease.

These aims were underpinned by a desire to try to take a different approach and use an open access and crowdsourcing approach. As part of that, a website called openashdieback was established to host new observations and provide access to data generated by the consortium. In view of the intense public interest, we also developed and released Fraxinus, a Facebook-based citizen science genomics-based game. This enabled non-specialists to contribute to the genomic studies of the pathogen by helping to improve genetic variant predictions from DNA sequence alignments. Many computer programs have been devised to optimise alignments. However, none can improve on the pattern recognition skills of the human eye. Once an alignment process is complete, genetic variations such as single nucleotide polymorphisms (SNPs) or insertion-deletion polymorphisms (INDELs) can be identified and further studied in relation to alterations in, for example, pathogenicity. 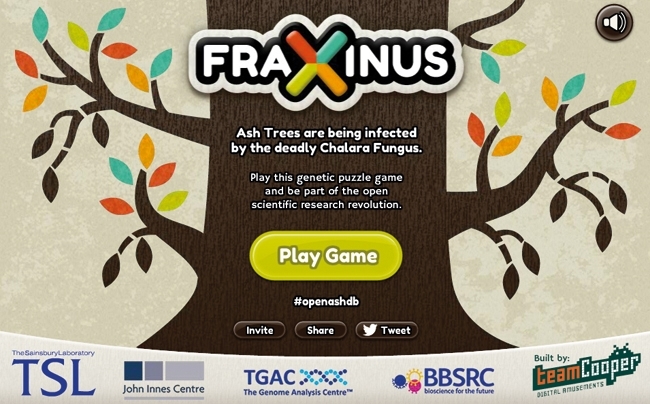 Gross, A. & others (2012). Reproductive mode and life cycle of the ash dieback pathogen Hymenoscyphus pseudoalbidus. Fungal Genetics and Biology 49, 977–986.

Saunders, D. & others (2014). Crowdsourced analysis of ash and ash dieback through the Open Ash Dieback project: A year 1 report on datasets and analyses contributed by a self-organising community. BioRxiv. doi:10.1101/004564.