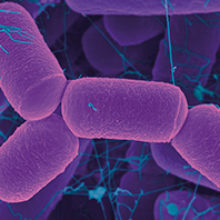 There are lots of hazards associated with growing archaea, that group of prokaryotes best known for their extreme lifestyles. A momentary lapse of concentration when dealing with a hyperthermophile growing above 80 °C can easily result in a nasty burn.

My own lab, which focuses on the growth of strict anaerobes (requiring media with less than 10 parts per million oxygen), has been the site of a couple of minor, fortunately injury-free, explosions. One was due to our underestimation of the rate at which a (new to the lab) Thermococcus kodakarensis strain produced hydrogen. With insufficient headspace in a closed 1 litre bottle for an overnight culture, we returned the next day to discover that the bottle had exploded, throwing the metal lid off the 85 °C waterbath which had housed the bottle and littering the lab floor with broken glass. The second incident was due to an equipment failure that resulted in escaped hydrogen (normally used to feed methanogens) finding a spark and blowing the door of an under-bench cupboard off its hinges. Luckily for the postdoc involved, the door missed him on its way across the lab.

There is an inherent risk when working with organisms that either produce or use hydrogen. I’m sure that if my Departmental Health and Safety Officer is reading this article, he’ll agree that we work hard to ensure that these risks are minimised. Which is why, despite feeding methanogenic archaea a diet of 80% hydrogen (explosive) to produce methane (highly flammable) – sometimes with a dash of (highly toxic AND explosive) hydrogen sulfide – I have only two incidents to relate from almost 20 years of working with these very strict anaerobes. I should emphasise to my Health and Safety Officer that the stories I relate concerning postdocs being blown across the laboratory by exploding anaerobic glove boxes, or accidently injecting themselves with (oxygen-free) gases, are ones that I have heard only second-hand from overseas colleagues. I have never witnessed such incidents (thankfully the parties concerned also emerged relatively unscathed), and we have all reasonable measures in place to absolutely minimise such hazards when we grow archaea in York…

While the growth requirements of many archaea can be hazardous, the organisms themselves are not. A silver lining for my risk assessments perhaps, but an aspect I’ve always considered to be a distinct disadvantage when it comes to writing applications for funding. Why would anyone want to fund research on microbes that don’t kill anyone or anything? Are there really no archaeal pathogens? And if not, why not?

For a microbe, pathogenesis is a fundamentally bad idea. From an anthropomorphic point of view, why would you kill the host that is providing you with food and board at no cost? Is this not a poorly thought-through error of judgement? Surely a much better approach to propagation of one’s progeny is to hide in a corner and hope you’re not noticed? By minimising the burden on your host – or, better yet, offering them some service – they are more likely to tolerate, or even encourage, your presence. This approach is taken by many bacteria – providing increased metabolic capacity (the ability to digest, convert or produce molecules of interest) for a host makes a prokaryotic guest a more attractive proposition. Therefore, bacterial disease must occur mainly through opportunity and competition: bacteria enter their host through a compromised barrier and then (inappropriately) employ mechanisms to compete for resources (production of siderophores to sequester iron, release of toxic molecules) or cause physical damage to host cells by proliferating in tissues.

To date, the predominant archaea detected in humans (and other animals) are methanogens. Human-indigenous methanogenic species have been hard to detect, requiring specific protocols to disrupt their cell walls for DNA extraction. Do they offer their hosts a metabolic advantage? Hydrogenotrophic methanogens, which reduce carbon dioxide with hydrogen to produce methane, compete with faster-growing, sulfate-reducing bacteria for hydrogen. The presence of methane rather than highly reactive, DNA-damaging hydrogen sulfide in the gut is likely indirectly protective against intestinal disorders such as ulcerative colitis and colorectal cancer. The recently described Methanomassiliicoccales potentially detoxify methanol produced by other gut residents via hydrogen reduction to methane. Acetoclastic methanogens may reduce obesity through the consumption of acetate that would otherwise be used by their hosts. So, archaea may be welcome guests, but do they ever exhibit antisocial behaviour?

The evidence is growing that archaea may indulge in opportunistic pathogenesis: Methanobrevibacter smithii, apparently the most abundant methanogen in human guts, has been reported to be found more often in stool samples from patients with diverticulosis than healthy individuals. The non-acetoclastic M. smithii has also been reported to increase obesity in germ-free mouse models when grown syntrophically with Bacteroides thetaiotaomicron. Methanobrevibacter oralis is found in and around the gums of about 5% of healthy subjects but up to 10 times more frequently in patients exhibiting periodontitis symptoms. Recently, this same organism was found in 40% of human brain abscesses but only 10% of controls. Injection of a million M. oralis cells into the brains of 22 mice resulted in 77% mortality after seven days, compared to no deaths in the 14 buffer-injected controls. Of course, the injection of a million live cells of almost any microbial species into a mouse’s brain seems likely to cause problems, but methanogens appear to be no different. While these studies have been relatively small scale and none of them have the 100% statistics we would like to satisfy Koch’s postulates, bacteria are often in the same position. Meningitis can be caused by both viruses and bacteria – even bacterial meningitis is caused by different organisms. In the USA, bacterial meningitis cases can generally be attributed as about 45% Haemophilus influenzae, and roughly 16% each Neisseria meningitidis and Streptococcus pneumoniae (with proportions of the latter two species varying by season). This leaves nearly 20% of cases that could be caused by different organisms. No one questions that any of these organisms are pathogenic.

Why has it been so difficult to convincingly demonstrate archaeal pathogenesis? Our ability to detect archaea has certainly been an obstacle. Improved DNA extraction methods have demonstrated that methanogens are more common in the human gut than previously suspected. The recent description of new, uncultivated, archaeal lineages assigned to the Asgard clade has also been facilitated by advances in high-throughput sequencing and bioinformatics methods to analyse these data. Another possibility is that we have not recognised the symptoms of archaeal diseases. The similarity of some archaea, such as Lokiarchaeota to eukaryotes, could compound this problem. I have previously speculated (to myself) that proteins from archaea with high similarity to proteins in their eukaryotic hosts could be the trigger for some conditions that have been labelled as ‘autoimmune’. Leeuwenhoek first described bacteria in 1674, archaea were only recognised as a separate group of prokaryotes by Carl Woese in 1977. Perhaps we simply have not yet had enough time to identify the effects of these closet pathogens.