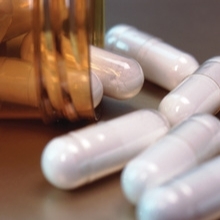 Virtually everybody at some point in their life has been prescribed antibiotics by their doctor. These drugs form one of our mainstays in health care against infectious diseases along with vaccination. Interestingly, almost all of these drugs are natural products made by micro-organisms to help them compete in the natural environment. Here, we try to answer some of the most common questions regarding antibiotics.

Antibiotics are usually small chemical molecules that micro-organisms make and secrete into the environment where they can have an effect on other organisms. Antibiotics belong to many different chemical classes and have a wide range of targets within the cell. They range from small-molecular-mass compounds such as the phenolic antibiotic chloramphenicol, which is made by Streptomyces venezuelae, and still commonly used to treat eye infections like conjunctivitis (although all the chloramphenicol used today is chemically synthesised as it is cheaper than S. venezuelae fermentation), through to the large macrolide compound erythromycin made by Saccharopolyspora erythraea, used to treat respiratory infections. Small peptide antibiotics (e.g. colistins and lantibiotics) have come to prominence in the last few years. In fact one lantibiotic, nisin, is widely used as a food additive.

WHY DO MICRO-ORGANISMS MAKE THEM?

The exact function of antibiotics in the natural environment is a source of much debate. Traditional views have been that they were produced as chemical weapons to kill competitor micro-organisms and provide an evolutionary advantage in highly competitive environments such as soil. This view is changing and it is clear that many compounds only have antibiotic activity at relatively (and artificially) high concentrations. It is these high levels that are used in the clinic to treat infections, but in the natural environment they are present at much lower concentrations and are likely to have signalling roles, either within a species or across species.

Interestingly, antibiotics fall into a wider group of molecules produced by micro-organisms, named ‘secondary metabolites’. They are so named because they are not essential (i.e. they are secondary) for growth of the producing organism, and it may be that large-scale production is only observed under laboratory conditions. Moreover, many of the organisms that produce antibiotics also produce other secondary metabolites that affect the growth of other kinds of cells, such as cancer cells, or modulate the immune response, or even kill fungi, parasites and worms. So with such a diversity of activities it seems most likely that the response we observe in the lab, and the clinic, is an artefact of using such antibiotics at higher concentrations than they would occur in nature. That said, they are very useful for human health and it is a good thing that they affect biological processes this way! In fact it has been estimated that the introduction of antibiotics led to an 8-year increase in human life expectancy.

WHAT KINDS OF MICRO-ORGANISM MAKE ANTIBIOTICS?

Many different types of micro-organism can produce antibiotics – indeed many species make several different secondary metabolites depending on the growth conditions or at a different stage of their lifecycle. The majority of antibiotics used in medicine are natural products that are made by large-scale industrial fermentation processes. The best-known antibiotic, and the first to be discovered, is penicillin, made by the fungal genus Penicillium and some of its relatives, but the undoubted kings of antibiotic production are bacteria. In particular, the Actinobacteria (a large and abundant bacterial phylum accounting for almost 30% of all bacterial species) with genera such as Streptomyces, Amycolatopsis, Saccharopolyspora and Micromonospora producing a multitude of clinically important antibiotics. Another group of bacteria, the myxococci have more recently revealed themselves as a good source of potentially useful antibiotics.

Generally the micro-organisms that are prolific producers tend to come from highly competitive environments where they may interact with a range of other organisms. Soil has traditionally been a good hunting ground for finding antibiotic-producing micro-organisms, and this has been extended recently to looking in unusual soils from extreme environments such as from permafrost areas and hyper-arid soils from deserts. Deep-sea marine sediment has yielded many interesting compounds in recent years, with one actinobacterium, Salinispora, producing several useful antibiotics and anti-cancer drugs.

WHY DO WE SEE RESISTANCE?

Resistance to antibiotics is not really a surprise because bacteria that make antibiotics have to be resistant to them to avoid killing themselves! The resistance genes encoded by antibiotic-producing bacteria can spread to disease-causing bacteria under evolutionary selective pressures, e.g. exposing pathogenic bacteria to antibiotics. There are lots of ways that micro-organisms can avoid being killed by antibiotics and these include altering the antibiotic to prevent its action (such as phosphorylation, glycosylation, adenylation, degradation), altering the target of the antibiotic (such as altering ribosomes, remodelling their cell wall) so the antibiotic cannot bind to its target, or by efflux, essentially ejecting the compound from the cell. Many of these mechanisms are used by the producing bacteria to avoid suicide and they become important when the same resistance arises in pathogenic bacteria. This can arise through spontaneous mutations (a minor route) but more commonly by horizontal gene transfer, a process whereby pathogens can acquire resistance genes from antibiotic-producing bacteria in the environment. A good example is vancomycin that is used as the drug of last resort for treating meticillin-resistant Staphylococcus aureus (MRSA). Vancomycin and related glycopeptide antibiotics are made by actinobacteria that live in the soil, but over a period of 45 years the five core resistance genes have spread from Streptomyces to MRSA to give vancomycin-resistant MRSA (VRSA), a new superbug resistant to almost all known antibiotics.

HOW CAN WE PREVENT THE SPREAD OF RESISTANCE?

We know that resistance to every antibiotic is present in the environment and can potentially be transferred from one strain of bacterium to another. However, we can significantly slow this process down and avoid the spread of resistance simply by using antibiotics responsibly, i.e. use them exactly as prescribed by the doctor, always finish the antibiotic course even when you are feeling better, and practice good basic hygiene such as washing your hands regularly and covering your nose and mouth with a tissue whenever you sneeze or cough. These are very simple but effective ways of stopping the spread of resistance and infectious diseases.

The discovery of the first natural product antibiotic, penicillin, in 1928 triggered a golden age of antibiotic discovery that revolutionised medicine. In addition to treating infections and cancers, natural products have revolutionised surgery and made organ transplantation possible. Despite this, very few new antibiotics have made it to the clinic since the 1980s and, with multidrug-resistant infections on the increase, we are fast approaching a new age without antibiotics. This imminent crisis has spurred academics and big pharmaceutical companies into action, and with the advent of genome sequencing and many other technological advances since the so-called golden age, the battle against drug-resistant infections may just swing back in our favour. Natural products remain our best hope of treating disease but we know that resistance is inevitable. This means the battle will continue for as long as humans survive because we will always need new antibiotics.