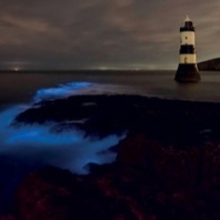 Centuries ago, in a time of myths of dragons and gods, seafarers and beach dwellers were baffled by the flashes of light and glowing lights seen in oceans all over the world. Today, we now know this is caused by bioluminescence, a chemical emission of light seen across the tree of life, in fish, invertebrates, annelids, arthropods and, most interestingly for us, micro-organisms.

The blue-green light seen at the surface of oceans is bioluminescent microbes. Light is produced from a class of substrates called luciferins, in an oxidation reaction catalysed by the enzyme luciferase. In bacteria, this reaction is controlled on the lux operon and in other microbes bioluminescence occurs in organelles called scintillons.

Much of the bioluminescence seen on the ocean surface is from the unicellular algae dinoflagellates. They are responsible for some of the most impressive displays of bioluminescence, and attract tourists to bays and lagoons in places such as Puerto Rico, Jamaica and the Maldives.

Dinoflagellates are protists that live mainly in seawater. They comprise around 18 genera that are capable of bioluminescence, all of which contain scintillons, organelles that contain luciferase and luciferan. Bioluminescence in dinoflagellates is so vital that more energy is put into emitting light than into growth. They use bioluminescence as a distraction or to surprise predators. 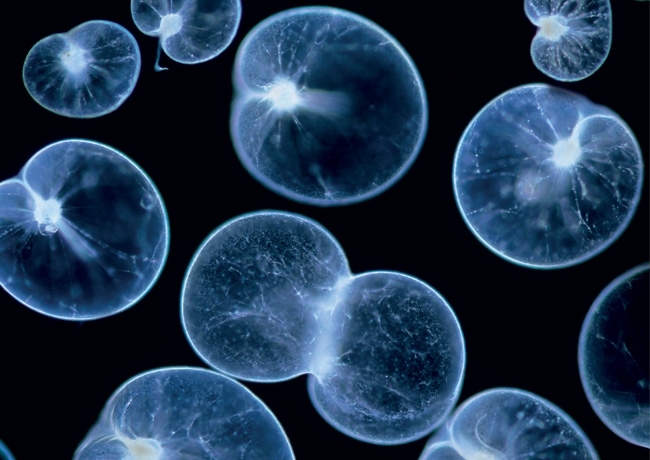 In dinoflagellates, bioluminescence occurs on a circadian rhythm, with light only being emitted at night. Unlike bacteria and fungi, the light is emitted in flashes and occurs because of a physical disturbance to the cell, such as boats and wave movement. Common dinoflagellates include Noctiluca scintillans, known as ‘Sea Ghost’. Pyrodinium bahamense is found in tropical waters of the Atlantic and Lingulodinium polyedrum in warm coastal waters including the Pacific.

There is only one order of fungi that contains species that can bioluminesce: the Agaricales. Depending on the species, light can be emitted from mycelia, fruiting bodies or spores. Unlike dinoflagellates, they emit light continuously. There is a lot less understanding of bioluminescence in fungi than in bacteria or dinoflagellates, but the mechanisms are similar in the use of luciferin and luciferase and the emission of blue-green light. Fungi’s ability to bioluminesce is thought to be linked with metabolism, as variables such as pH, light and temperature affect bioluminescence in Agaricales species. The purpose behind fungal bioluminescence is not fully understood, but suggestions are that bioluminescent fruiting bodies could promote spore dispersal by attracting grazers, and that, conversely, bioluminescent mycelia could deter grazing and thereby act as protection against predators.

The majority of bacteria with bioluminescent capabilities are from the family Vibrionaceae, with some species occurring in the genera Photobacterium and Photorhabdus. Mostly found in marine environments (water, sediment, the surface of decomposing fish and the guts of marine animals), they can be free-living, or live in symbiosis with larger organisms, such as squid or nematodes. Symbiotic bacteria allow the symbiont to use their bioluminescence for predation and attracting a mate in exchange for available nutrients. Free-living bacteria are thought to use bioluminescence in quorum sensing, a mechanism by which bacteria regulate gene expression in accordance with population density through the use of signal molecules.

‘Milky seas’, or ‘mareels’, is the name given to the effect of bioluminescent bacteria turning up to 6,000 square miles of ocean into a glowing light show.

It is quite easy to grow certain species of bioluminescent dinoflagellates in schools. Pyrocystis lunula is a robust and easily grown dinoflagellate that can be purchased cheaply from a variety of culture collections, such as the Culture Collection of Algae and Protozoa. Information on how to grow and keep these microbes in a classroom can be found on their website.

Dinoflagellates bioluminesce in a circadian rhythm. To use in a classroom environment, their day/night growing patterns must be reversed. This can be achieved by growing them in a windowless room with an artificial light on overnight for 12 hours, and then keeping them in darkness for 12 hours during the day. The microbes will then bioluminesce during their ‘night phase’, when everyone is in school. It usually takes a week for the dinoflagellates to readjust to their new light schedule.