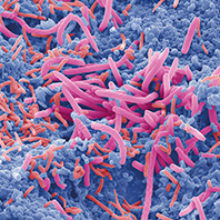 Every surface of the human body, inside and out, is covered in billions of different species of micro-organisms. These micro-organisms are mainly bacteria, but also include viruses and fungi, and are collectively known as the ‘human microbiome’. The bacteria that make up the human microbiome live together in a close relationship with us and some even help the body perform vital functions.

These bacteria exist in unique communities on each person and live in every part of our body, from our mouths to our intestines, which are known as the oral or gut microbiomes, respectively. Some bacteria in the microbiome do not have any effect on the human host, while others can be beneficial and some might cause disease. The balance between health and disease relies on the interaction and balance of these bacteria in their particular environment.

Our microbiomes are influenced by our environment and the micro-organisms that we interact with at various stages of our life. This includes any animals we touch, the food we eat and the antibiotics we take. When teaching about the microbiome, encourage students to think about their own microbiome and what will have influenced theirs in the past month.

As briefly described above, there are a number of environments that have unique compositions of micro-organisms and microbiomes. Working in small groups, pick one of the following environments to investigate further:

There are many aspects of these specific environments for the students to investigate, such as:

When the students have completed their research, ask them to present their findings to the rest of the class as a poster that could include an infographic to show a visual representation of the possible number and range of organisms, and the factors affecting their microbiome.

It is estimated that there are somewhere between three and 10 micro-organism cells to every one human cell in the human body. These micro-organisms vary in their shape and size so trying to visualise the microbiome can be difficult.

Get your students to think about how their gut microbiomes differ from their classmates’. Ask them what they think influences the bacteria that are within their gut.

After brainstorming what might be in their gut, get the students to draw a magnified image of the inside of their gut, depicting the different micro-organisms that reside there. Think about the specific types of bacteria that are commonly found in the human gut and possible foreign microbes that may be present, i.e. from recently eaten food. This is their chance to get creative with micro-organisms! Tweet your pictures to the Society’s Twitter account (@MicrobioSoc) or send a picture of them to [email protected] and we will share our favourites.