Over the past few months, Rebecca Philp, a PhD student from the Pirbright Institute, has been working at the Microbiology Society as our Public Affairs intern. While researching for a policy briefing, Rebecca learnt a lot about bioremediation. She explains a little about it in this blog. 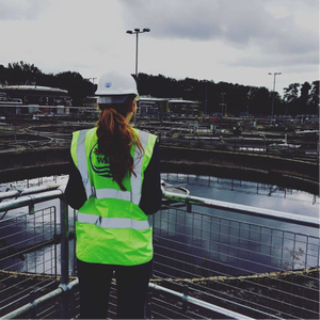 The global population continues to rise at an astonishing rate, with estimates suggesting it will be in excess of 9 billion in 2050. The intensive agricultural and industrial systems needed to support such a large number of people will inevitably cause an accumulation of soil, water and air pollution. Estimates have attributed pollution to 62 million deaths each year, 40% of the global total, while the World Health Organization (WHO) have reported that around 7 million people are killed each year from the air they breathe. Water systems fare little better, with an estimated 70% of industrial waste dumped into surrounding water courses. The world generates 1.3 billion tonnes of rubbish every year, the majority of which is stored in landfill sites or dumped into the oceans.

We need to control our pollution; thankfully, microbes might be the answer.

Micro-organisms are well known for their ability to break down a huge range of organic compounds and absorb inorganic substances. Currently, microbes are used to clean up pollution treatment in processes known as ‘bioremediation’.

Bioremediation uses micro-organisms to reduce pollution through the biological degradation of pollutants into non-toxic substances. This can involve either aerobic or anaerobic micro-organisms that often use this breakdown as an energy source. There are three categories of bioremediation techniques: in situ land treatment for soil and groundwater; biofiltration of the air; and bioreactors, predominantly involved in water treatment.

A visible example of where bioremediation has been used to good effect can be found in London’s Olympic Park. The grounds that held the 2012 Olympics had previously been heavily polluted, after hundreds of years of industrial activity. Bioremediation cleaned 1.7 million cubic metres of heavily polluted soil to turn this brownfield site into one containing sports facilities surrounded by 45 hectares of wildlife habitats. Groundwater polluted with ammonia was cleaned using a new bioremediation technique that saw archaeal microbes breaking down the ammonia into harmless nitrogen gas. The converted park marked the London 2012 Olympic and Paralympic Games as the “greenest” and most sustainable games ever held, only possible with bioremediation techniques.

While some soil cleaning techniques require the introduction of new microbes, ‘biostimulation’ techniques increase natural degradation processes by stimulating the growth of microbes already present. Natural biodegradation processes can be limited by many factors, including nutrient availability, temperature, or moisture content in the soil. Biostimulation techniques overcome these limitations, providing microbes with the resources they need, which increases their proliferation and leads to an increased rate of degradation.

Cleaning up oil-polluted soil is an example of where stimulating microbial growth can be used to good effect. Research has shown that poultry droppings can be used as a biostimulating agent, providing nitrogen and phosphorous to the system, which stimulates the natural growth rate of oil-degrading bacteria. Systems like these may prove cheaper and more environmentally friendly than current chemical treatment options.

Air is polluted by a variety of volatile organic compounds created by a range of industrial processes. While chemical scrubbing has been used to clean gases emitted from chimneys, the newer technique of ‘biofiltration’ is helping to clean industrial gases. This method involves passing polluted air over a replaceable culture medium containing micro-organisms that degrade contaminates into products such as carbon dioxide, water or salts. Biofiltration is the only biological technique currently available to remediate airborne pollutants.

In the UK, access to clean, potable water and modern sanitation is something we take for granted. However, there are billions of people on Earth for which this is a luxury. The WHO estimate that each year 842,000 people die as a result of diarrhoeal diseases, many of which could be prevented if they had access to clean water and proper sanitation. Around 2.6 billion people lack any sanitation, with over 200 million tons of human waste untreated every year.

Sewage treatment plants are the largest and most important bioremediation enterprise in the world. In the UK, 11 billion litres of wastewater are collected and treated everyday. Major components of raw sewage are suspended solids, organic matter, nitrogen and phosphorus.

Wastewater entering a treatment plant is aerated to provide oxygen to bacteria that degrade organic material and pollutants. Microbes consume the organic contaminants and bind the less soluble fractions, which can then be filtered off. Toxic ammonia is reduced to nitrogen gas and released into the atmosphere.

Bioremediation is not a new technique, but as our knowledge of the underlying microbial reactions grow, our ability to use them to our advantage increases. Frequently, bioremediation requires fewer resources and less energy than conventional technology, and doesn’t accumulate hazardous by-products as waste. Bioremediation has technical and cost advantages, although it can often take more time to carry out than traditional methods.

Bioremediation can be tailored to the needs of the polluted site in question and the specific microbes needed to break down the pollutant are encouraged by selecting the limiting factor needed to promote their growth. This tailoring may be further improved by using synthetic biology tools to pre-adapt microbes to the pollution in the environment to which they are to be added.

Pollution is a threat to our health and damages the environment, affecting wildlife and the sustainability of our planet. Damage to our soils affects our ability to grow food, summarised in our policy briefing on Food Security. Bioremediation can help to reduce and remove the pollution we produce, to provide clean water, air and healthy soils for future generations.

To find out more about bioremediation, watch our explainer video: