We all have insects in our homes, be it spiders, flies or bed-bugs. Their presence, although sometimes annoying, is not seen as anything sinister. But what bacteria could the creepy crawlies hiding under the sofa be carrying?  Federica Boiocchi is a PhD student at Aston University in Birmingham. At the Early Career Microbiologists' Forum Summer Conference which took place in June, Federica won the poster competition with her poster 'Microbiological analysis of flying insects collected in the hospital environment and antibiotic resistance profiles of isolated bacterial strains.' Here, she discusses her research in greater detail, and what the she has learned so far during her PhD: 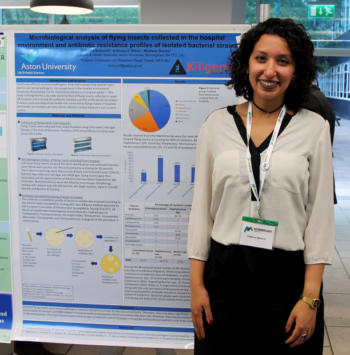 Usually people tend to keep a distance from insects, creepy crawlies and bacteria, but this is what my PhD is about…bugs and bugs! And I couldn’t love it more.

My PhD project concerns household arthropods and their bacterial community. Arthropods include insects, spiders, millipedes, centipedes and crustaceans, and even if it can seem unexpected, all of these animals can be found inside our homes! We still know very little about arthropods that live indoors.

From a public health point of view, arthropods play an important role. Insects in particular are efficient vectors of pathogenic agents that cause diseases – they can transmit bacteria, viruses, helminths and protozoa. Until now, research mainly focused on pest species, such as cockroaches, mosquitoes, houseflies and ants, and we don’t know the potential public health risk of non-pest arthropods that live in our homes.

A recent study based in the United States has shown that homes are populated with hundreds of different species of arthropods, but only a small percentage is represented by pests. Since little is known about household arthropods in Europe or the UK, the first purpose of my project is to investigate which insects enter homes over a 12-month-period. I will recruit volunteers and ask them to place sticky traps in different rooms of their homes in order to monitor the arthropods that visit these environments. Beside this passive method of capture, volunteers will also actively capture arthropods using different tools, such as pooters and spider catchers.

I am interested in the public health significance of the arthropods that live so close to us, and so after this I will investigate their bacterial communities with both cultural and non-cultural techniques. Finally, I’m going to assess the antimicrobial susceptibility patterns of the bacterial strains isolated in order to have a better understanding of their potential risk.

During my MSc, I became interested in microbiology and entomology, writing a thesis on the bacterial population of the feces of insects that infest foodstuffs. We wanted to determine whether they could be the origin of type I sourdough microorganisms. After my MSc I worked for a year for a food company as a microbiologist, but I missed the exciting and challenging environment of academia. That was the moment I decided to apply for a PhD. I chose my current project because of my background of microbiology and entomology, and at the same time, I was excited to focus on such an important theme concerning public health since which I had little experience in previously.

Life in the lab can be tough sometimes, the unexpected is always around the corner and you always have to be prepared with a plan B. This can appear as a negative aspect but it is also what makes research so engaging and never boring. I’ve just started the second year of PhD. So far, I have assessed the protocols and procedures I’m going to use during my 12 months collection and analysis of household arthropods. Simultaneously, I carried on a study previously undertaken in my lab for which I assessed the antimicrobial resistance profiles of bacterial strains isolated from hospital flying insects. The findings of this project revealed that flying insects in the hospital environment can carry several pathogenic bacteria resistant to antibiotics.

The role of arthropods in the domestic environment will be a significant output of the ongoing study. The results of my project will help to increase awareness about the public health significance of arthropods, expand our knowledge of unknown risks in household insects that could carry pathogenic bacteria and finally, inform pest control companies about the monitoring of non-pest arthropods that could represent a microbiological risk.