The beginning of the new set of talks for the Junior Awards in Microbiology (JAM) series recently took place at the Institute for Microbiology and Infection at the University of Birmingham. I’m Daniel, a postdoctoral from Cardiff University, and I was privileged to be accepted to speak at this event. 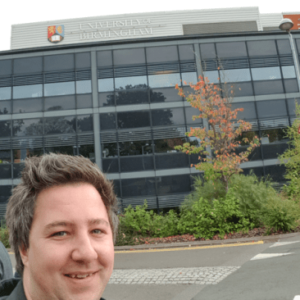 Freshly opened, sweet as ever:

Even before travelling to the university, the promotion of the event was clear on social media. The JAM Talks team were drumming up interest by sending promotional tweets, and retweeting things that the speakers (@DanielJMorse and @SophieClough01) had sent. After travelling up from South Wales on the train (with expenses kindly covered!), I was greeted by the JAM organising committee outside of the train station. The organising committee also kindly organised accommodation for the trip, so after a not-so-short walk to the hotel, it was then time to meet in the main room for the presentation preparations.

Despite a few minor technical hiccups (like not being able to turn on the computer, or get the projector working), all was well and everything was finally ready for the audience to arrive.

The room filled pretty quickly, with many more than I had anticipated in attendance. This was particularly encouraging because it was a dreary Friday afternoon, at prime social time, which, for many scientists (and indeed other professions) is not to be spent listening to science-heavy talks. However, in their masses, they filed into the room.

The organising committee then gave an introduction to the seminar series, highlighting the support of the sponsors; SfAM and The Microbiology Society, and then the talks began. First up, was Sophie Clough from the University of York.

Sophie is a late-stage PhD student working on pathogen resistance evolution in plant microbiology. Her talk detailed her PhD work, and her future plans for the remainder of the project, also with the intention of spending time in her collaborator’s laboratory, picking up valuable additional experiences and skills no doubt! Sophie’s talk went down really well, with great robust science, and a few laughs thrown in for good measure!

After a short question and answer session, handled really well by Sophie, it was my turn. My talk detailed the findings from my PhD, and was titled “The complex world of polymicrobial denture-associated biofilms: microbial composition, interactions and infection”. The idea was to provide a briefly-detailed overview of my project, with key findings and observations, but with broader non-clinical context too.

With that in mind, I began with an introduction of biofilms and the condition I was working on; denture-associated stomatitis. This is caused by a really interesting microorganism; Candida albicans, which has the ability to switch between yeast and hyphae, thus making itself more virulent and pathogenic. The data showed that co-culturing C. albicans with some oral bacteria results in modulation of the virulence, and differential expression of known virulence-associated genes. I also presented a clinical study which characterised the bacterial microbiota of patients with and without denture-associated stomatitis, which looked at differences in bacterial species abundance or presence/absence associated with disease.

The talk was, from my perspective, relatively well received with quite a number of intriguing questions from the audience. This is the most difficult, but often the most stimulating section of giving a talk. You cannot really prepare for a Q&A session, people in the audience are their own person, thinking their own thoughts and asking what they feel is necessary at the time. But that’s what makes it so enjoyable and so personal. I genuinely love the area I’m working in, and really like to discuss and debate everything related to it. It’s always great to get another person’s perspective on the work, good or bad! 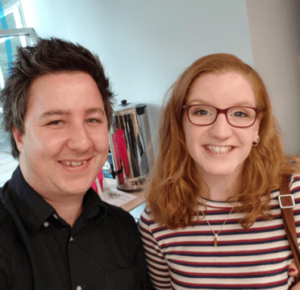 After the talks had finished came the announcement that nibbles and drinks would be provided by the organising committee, and so the organisers, speakers and many from the audience joined us for discussions and a low-key social gathering for a few hours. This was great, and gave an excellent opportunity to meet people from the audience, learn about their work, their ambitions. I was also able to talk with the organising committee, and of course, Sophie herself!

We were then treated to a meal in the centre of Birmingham, which was a short train journey away, and again, another fantastic social event to get to know more about the committee, and just have a generally good time.

I thoroughly enjoyed the trip, and cannot thank the organising committee enough for accepting my abstract and inviting me to speak, and for the hospitality they provided.

For those that are interested in or thinking about applying in the next round, I would whole-heartedly recommend you do so. It can be a bit daunting, being an invited speaker to a university that you’ve never been to, or with people you’ve never met, but embrace that and enjoy the occasion. Take the opportunity with both hands and disseminate your excellent research to as many as you can! If I could do it again, I absolutely would!

Daniel has a blog of his own which you can read here: http://www.imascientist.net, and do get in touch with him to contribute or become a featured scientist! Twitter: @DanielJMorse