World Antibiotic Awareness Week at the University of Plymouth

This week, Dr Tina Joshi and colleagues from the University of Plymouth Institute of Translational and Stratified Medicine have arranged a series of activities to engage the public and students for World Antibiotic Awareness Week. The events are running from 12-16th November 2018 and include a “Superbugs Pub Quiz”, research poster exhibition and a Film Screening in association with the Longitude Prize (NESTA). Here, Tina Joshi discusses the potential impact of these events to increase awareness of the antibiotic resistance crisis. 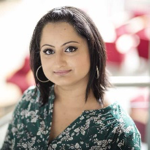 I am a Lecturer in Molecular Microbiology at the School of Biomedical Sciences at the University of Plymouth, leading the Clinical Microbiology teaching at undergraduate level. My research group “Microbial Diagnostics and Infection Control” focusses on the development of rapid diagnostics for pathogens and understanding the role of fomites and microbicides in pathogen transmission. One of my greatest passions is communicating science research to the public and it’s what makes my role so rewarding and worthwhile. I genuinely enjoy talking “science” to people and taking time to engage in STEM activities within schools, contributing to articles, delivering public lectures and appearing on local and national TV.

Because of my enthusiasm for public engagement I volunteered to be a Microbiology Society Champion for Plymouth with the aim of encouraging others to be as interested in microbiology as I am! The Champion’s scheme has helped to fund the activities described below. Microbiology permeates many facets of everyday life and policy; which is also one of the reasons why I decided to become involved with the Microbiology Society Policy Committee. The Society has been invaluable with their support and being a member has provided me with new opportunities to try and make a real difference to our society. Indeed- that is why I became a scientist.

Each year the University of Plymouth has held events to mark World Antibiotic Awareness Week (WAAW) and this has been spearheaded by Professor Mat Upton. Excitingly, our awareness work was shortlisted for the Antibiotic Guardian Awards in June 2018 and this recognition spurred us on to make our WAAW events bigger and better than ever before! This year our aim has been to reach larger audiences around Plymouth and Devon and spread the word about the impacts of AMR. We also aim to raise money for the Peninsula Medical Foundation who fund pioneering research, pilot projects, clinical trials and PhD research students at the University of Plymouth's Medical School.

Most microbiologists are familiar with the statistic that by 2050 there will be 10 million deaths per year from AMR- which is more than cancer and diabetes combined. This statistic is shocking and it’s so important for the public to understand how this will affect them. Yes it is true that most people have heard about Antibiotic Resistance; however, there appears to be some confusion about its impact on society and the reasons why resistance has occurred in the first place. Moreover, the public appear to be unsure as to how they can help to combat the problem.

We wanted to encourage the public to understand the AMR in an accessible and fun way and decided to run events through WAAW and across the year. Our first event was the “Superbugs Pub quiz”. I had written this quiz for the “Superbugs Lates” event earlier in the year at the Science Museum and it was a big hit- so why not put the event on in Plymouth?! We arranged the venue with a local pub B-Bar and myself, Prof Mat Upton and Dr James Edwards arrived at the event expecting 30 attendees. What ensued was very fun evening related to Infections and Antibiotic Resistance with movie, music and “Cryptic Clues” rounds. In the end we had 9 teams competing for a range of prizes which included tickets for a comedy night.

The momentum continued with local BBC news (Spotlight) coming to film our cutting-edge antibiotics research at the University’s new Derriford Research Facility. Professor Upton gave an update on his antibiotic discovery work on deep sea sponges and antimicrobial peptide discovery of Epidermicin, as well the launch of University spin-out Amprologix. I also discussed my research into the development of point-of-care devices to diagnose antibiotic resistance in infected patients and how this could prevent unnecessary antibiotic prescribing. This segment is to be aired this week. Further, a few months back I also filmed a documentary for BBC One called “The Truth about Antibiotics” where I again discussed my research and the importance of antibiotic preservation. This is due to be aired in Winter 2018.

I have written this blog halfway through WAAW and the next event is specifically for the public: “Antibiotic Resistance: A problem that affects all of us” on 15thNovember 2018. This has been organised in association with the Longitude Prize and I’ve purposely designed the event to be a platform for the public to get involved and ask questions to an expert panel comprising healthcare professionals and academics. We are also screening the “Fighting Superbugs in India” film produced by the Longitude Prize to show the global severity of the issue. The Jill Craigie cinema at the University can seat up to 130 people; however, after launching last week, the event has booked out with 160 tickets reserved! This overwhelmingly positive response from the public has provided confirmation that AMR is an issue that they want to know more about.

At the same time I have teamed up with Wendy Smith MBE from the charity Well Connected in Plymouth to help raise antibiotic awareness in oral health across the community. Part of this involves designing interactive lessons for widening participation activities among disadvantaged groups, discussing my career and the importance of antibiotic research in schools and colleges. Alongside this I also released an article on the University website informing the public about how they can combat antibiotic resistance. This is the start of many exciting initiatives that we are implementing across the University and in the community. Indeed, we have organised a Zombie run campus early next year to raise awareness of antibiotics, and a film screening of the movie “Outbreak” to highlight infection transmission on Valentine’s Day!

Each November, the World Health Organisation (WHO) puts on World Antibiotic Awareness Week (WAAW) to increase global awareness of antibiotic resistance and promote ideas and engagement in the prevention of its further spread.