As part of World Antibiotic Awareness Week, we are continuing our New Antibiotics Needed blog series with Salmonella. Salmonella is the gram-negative genus of bacteria in the Enterobacteriaceae family and is commonly associated with food poisoning. The genus contains just two species; S. enterica and S. bongori. S. enerica is further divided into an additional six subspecies with over 2600 distinct variations also known as serovars. Salmonella is traditionally split into either typhoidal and non-typhoidal Salmonella depending on symptoms.

Salmonella is linked to one of the most severe epidemics in human history; in 1519 the Aztecs numbered 25 million, just a century later that number had plummeted to just above 1 million. Thoughts on the cause of this huge decline range from measles to smallpox, but ancient bacterial DNA collected points to Salmonella, potentially brought over by Hernan Cortésand the invading Spanish. Over 500 years later, due to the development of antibiotic resistance, it is still just as deadly, and listed as one of WHO’s 12 priority pathogens.

Non-typhoidal Salmonella (NTS) is a diverse group made up of over 2,500 serovars and can infect a range of animal hosts. The gastro-intestinal infection known as Salmonellosis is well known; undercooked chicken or mayonnaise that’s been left out too long is eaten with the risk of have an uncomfortable week ahead. Salmonellosis is fairly common, with an estimated 93.8 million cases a year. Most who contract Salmonellosis recover within two to seven days without the need for specific treatment. Despite this, there are an estimated 155,000 deaths a year.

A greater concern however, are the strains known as invasive non-typhoidal Salmonella that, despite infecting just 3.4 million people, cause over 680,000 deaths a year. These infections are common in sub-Saharan Africa, where other factors such as malnutrition, malaria, and HIV play a major part in contraction. 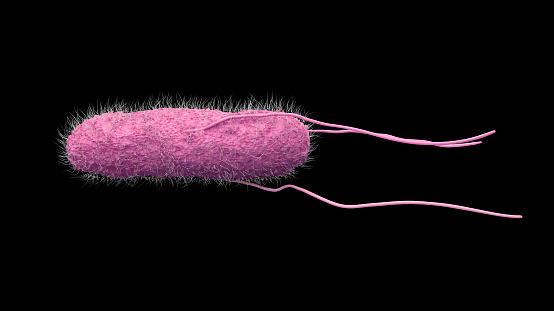 Typhoidal Salmonella is caused by just four of the Salmonella serovars and infects humans only. Typhoid fever lasts three weeks with distinct symptoms occurring each week, starting with a slow heart rate, headaches and coughs as body temperature slowly rises. During the second week, the patient experiences severe exhaustion, delirium and diarrhoea, and in the third week, a number of complications can occur including intestinal haemorrhaging, respiratory diseases, and encephalitis. By the end of the third week, the fever starts to subside. Typhoidal fever is rarer than NTS; there are an estimated 21.7-26.9 million cases a year and 217,000 deaths.

‘Fluoroquinolone resistance in Salmonella: insights by whole-genome sequencing’is published in the Microbial Genomics  collection New Antibiotics Needed. This collection contains 12 fully open access review articles, one for each of the WHO 12 Priority Pathogens. The review is written by scientists from The Institute of Tropical Medicine, Antwerp and The Sanger Institute. The review discusses fluoroquinolone resistance in Salmonella,its spread and how whole genome sequencing can help us understand the development and spread of resistance.