Each year, the Microbiology Society awards five Prize Lectures in recognition of significant contributions to microbiology. The awards celebrate the outstanding applications of microbiology to research, education and translation and all members are invited to nominate an outstanding microbiologist for the Microbiology Society Prize. We got in touch with former Unilever Colworth Prize winner Professor Martin Ryan (University of St Andrews, UK) to find out more about his research and experiences since being awarded the prize. 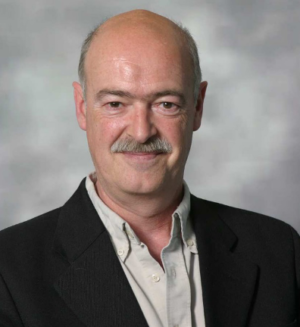 My PhD project was to clone and sequence the enterovirus EV70, which appeared in East Africa in the late 1960s (locally called ‘Apollo 11’ disease!). EV70 caused benign eye infections but could go on to cause a disease clinically indistinguishable from paralytic poliomyelitis. Like SARS-CoV-2, the causative agent of COVID-19, this virus became a pandemic and originated from transmission from animals to humans.

I went on to work on another picornavirus, foot-and-mouth disease virus (FMDV) at the Pirbright Institute. Picornaviruses have a genome structure similar to cellular messenger RNAs: they encode a single, long open reading frame but must generate multiple, different proteins to replicate and encapsidate their genomes. I became fascinated by the different mechanisms by which the virus polyprotein precursors are ‘processed’ into the individual proteins – and how one could apply this knowledge in the fields of biotechnology and biomedicine. Latterly, I have been working on developing live attenuated FMDV vaccines and this remains the final challenge in my career.

How has your work developed since winning your Prize?

The subject of my Unilever Colworth Prize lecture was the short oligopeptide 2A sequence (~18aa), which we had shown mediated a co-translational ‘recoding’ event, and how this could be utilised as a protein co-expression system in biotechnology and biomedicine. The sophisticated bioinformatic tools now available allowed us to probe databases (using a conserved motif at the C-terminus of 2A) and revealed the presence of ‘2A-like’ sequences in cellular genes. Although first characterised in viruses, we now know 2A-like sequences play a role in controlling both protein biogenesis and sub-cellular targeting in certain cellular genes – notably non-LTR retrotransposons and NOD-like receptor (NLR) innate immunity proteins, primarily in marine organisms. Presently, we are working on picornavirus 2A sequences: some picornaviruses encode multiple 2As indicating they have utilised this sequence for complex control over their protein biogenesis during virus replication. The main research effort is now, however, focused upon new FMDV vaccines.

What was the highlight of delivering your lecture?

Naturally, the highlight was getting up on one’s hind-legs and giving the lecture. Giving lectures to undergraduates, external seminars and at national or international meetings imparts experience, confidence and a skill set – but I freely confess to a certain ‘frisson’ for the Prize lecture! However, the pride I felt for the whole laboratory, who all had contributed over the years – undergraduate project students, PhD students, technical support staff and post-doctoral fellows – was immense. That all of our work had been recognised by one’s peers is the memory that persists to this day.

Why do you believe it is important to nominate colleagues for the Society’s Prize Lectures?

There are many different forms of peer-group ‘recognition’ in science: grants awarded, papers published, citations and so on; but to be awarded a Prize, such as the Unilever Colworth Prize, is special. I think the Microbiology Society does a fantastic job in identifying worthy candidates, but the hard work of the various groups can be greatly assisted by all of us. Get to know who is on the various panels/groups and contact them to nominate candidates for consideration. Naturally it’s important for the nominees, but also for the Society in being able to maintain the fantastic quality of meetings, to show organisations like Unilever how their generous donations are being so well spent and to continue to raise the profile of the Society.

How did you find your overall experience from being nominated for the award to giving your talk?

During the Annual Conference, the Microbiology Society had organised a series of social events for the various prize winners and I really enjoyed speaking with both other recipients and the Society staff whose names one reads of in the Microbiology Today but may have not met before. It wasn’t just the case of being wheeled-out to give the Prize lecture, but the experience throughout the whole of the conference was wonderful.

I would like to acknowledge the work of Michelle Donnelly, Pablo de Felipe, Lorraine Hughes, Helena Escuin-Ordinas – especially Garry Luke and Jeremy Brown who all have made such substantial contributions to the work.

To nominate someone for a Prize Lecture, please visit the relevant Prize Lecture page to find out more about its remit, judging criteria and past winners of the Prize. You will also be able to download the nomination form on this page.

After you’ve read the form to determine what to include, you and your fellow nominator should contact the person you’d like to nominate so that you can work with them to complete the nomination form. Nominators should be members of the Society, but the candidate does not have to be one. We have provided example nomination forms to demonstrate the level of detail required for nominations.

To submit your nomination, please email the completed form along with any supporting documentation to [email protected].

If you have any queries, would like to be put in touch with a second nominator or would like to talk through your ideas for a nomination, you can contact the Microbiology Society Prizes team for support via email at [email protected].