The RIVR (Recently Independent Virology Researchers), as the name would suggest, is a network of recently independent researchers (both lecturers and fellows) working in the field of virology. The group meets annually to network and share their science. This year, RIVR was held on 7-8 January at the Marriott Hotel in Leeds city centre. Becky Sumner attended the event through a bursary from the Journal of General Virology. Here, she discusses the event: 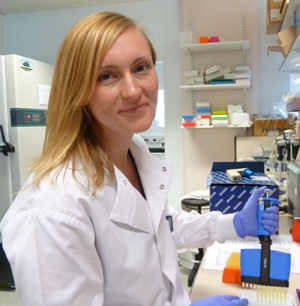 The talks covered a wide variety of aspects of virology research, ranging from structural and biophysical talks from researchers based at the University of Leeds to vaccinology and pathogenesis of animal viruses at the Pirbright Institute. Highlights for me were a talk on the effect of circadian rhythms on virus infection from Rachel Edgar, Imperial College; whether all flu virions are made equal presented by Ed Hutchinson from the University of Glasgow and a talk on Nipah virus vaccines from Dalan Bailey at the Pirbright Institute.

Mark Harris, the editor-in-chief of the Journal of General Virology (JGV), also attended the event and shared his views on the benefits of being a member of the Microbiology Society. Mark also discussed why we should support the Society’s journals such as JGV. Importantly, he also gave an update to the changes that have been made at the journal, including the appointment of Paul Duprex as deputy Editor-in-Chief, and discussed the future directions for JGV.

The keynote speaker for the meeting was Professor Gill Elliot from the University of Surrey. Gill gave a light-hearted overview of the highs and lows of her career as a molecular virologist – which has spanned over thirty years – from both a scientific and personal perspective. Having known Gill since my PhD at Imperial College it was interesting to hear her journey from a PhD student working on mumps virus, to a postdoc in HIV-1 to a Wellcome Trust junior research fellowship in herpes simplex virus, which has remained her virus of interest. Her experiences and advice on life as an academic, particularly from a female perspective, were incredibly insightful.

As the meeting gathered virology researchers from all over the UK, it allowed me to get a flavour of the different kinds of research that are currently ongoing in different departments, helping me consider more thoroughly where my work may be better supported and valued. As a senior postdoc looking for an independent position in the not-so-distant future, the meeting was an excellent opportunity to meet people who went through a similar situation recently. The advice I received on job and fellowship applications was invaluable.

Furthermore, the dinner and drinks reception were a great opportunity to chat more informally and hear people’s opinions on the positive and negative aspects of fellowships when compared with lectureships. As well as the differences in research environments of research institutes and universities.

Overall this was a useful and enjoyable meeting, both scientifically and socially, and I would recommend any newly-independent virology researcher to join the group and attend the meeting next year. Many thanks to the organisers, Juan Fontana and Kevin Maringer, and to the Journal of General Virology for sponsoring my attendance.